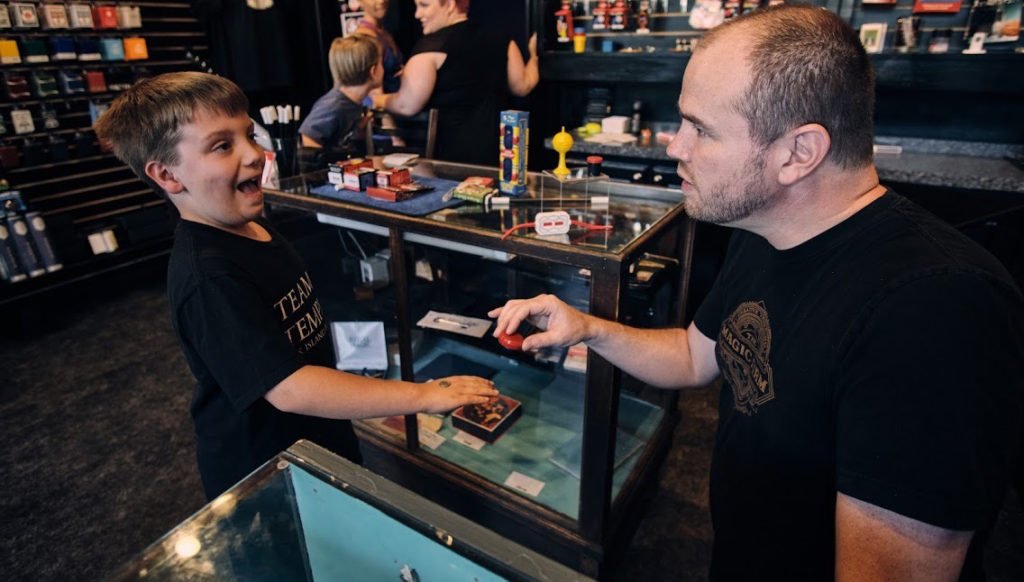 J&B Magic Shop and Theater in downtown New Albany isn’t hidden in a back alley or veiled in mist — none of the hackneyed genre tropes usually attached to places where the arcane arts can be uncovered. You’d drive right by it if you were, say, sifting through Spotify for the newest Selena Gomez single. So, the moment you do notice it, the store sort of pops into your field of vision as if by teleportation.

When you walk inside, owner and magician Brent M. Braun quickly engages you in conversation, shuffling cards and talking about tricks, or traveling magicians. It’s a small shop, small enough that despite the insane number of tricks and books on magic filling the space, a more jaded mind might be thinking, “Oh, is that all?”

But then you notice the door at the back of the store, the dark room on the other side, a row of dark wooden chairs just barely in view, a hint of the candelabras and velvet curtains. It’s kind of hard to tell if that door is supposed to be open, or if a mistake has been made. And if you haven’t had every single bit adventure beaten out of you by the real world, you’ll think, “That secret room… that’s probably where the real magic happens.”

And you’d be right.

Especially if you stop by the shop like I did last week for Thursday Night Magic Hangout, a weekly event where anyone can come to the shop and learn magic from Braun and other Louisville magicians. Braun invites everyone into the mysterious room, hoping they’ll become part of the future of magic. It’s something Braun said can thrive even in the age of YouTube tutorials.

“I think all I have to do is be able to provide you with things you can’t get on the internet,” said Braun. “That’s what we’re doing tonight. We got two guys that just came in earlier. One of them is 79 years old. The other one’s 82. They’ve never done magic tricks in their life, and now they’re sitting in the back room learning magic tricks.”

Thursday Night Magic Hangout is a very loose affair. Sometimes Braun teaches basic tricks — how to “force” a card so it appears at the top of the deck. Or, maybe he’ll teach how to make sure that the card an audience member picked at random shows up stapled to a wall underneath a framed picture of a famous magician. While he does all of that, he’ll also be showing how to distract an audience using stories and verbal razzle-dazzle. How to make sure they’re looking at the wrong hand at the right time — or the right hand at the wrong time — so they see only what the magician wants them to see.

That same back room doubles as a 30-seat magic theater, where some of the best magicians in the business perform for a packed house. Thursday night hangouts might not seem so impressive in comparison, but they’re part of that in-person experience Braun believes will grow the magic-loving community in Kentuckiana.

When I visited, Braun flipped on the fluorescent lights in the mysterious room and got down to business — teaching magic. Braun wasn’t the only magician in the house. Cody Clark, perhaps the hardest working man in Louisville magic, was also at the J&B last Thursday.

Another magician, Darshwood, who lately performs around town as “Darshwood the Whiskey Wizard,” was also in attendance. He does frequent shows at the J&B as well, and Braun jokes that Darshwood is part owner of the store.

Clark and Darshwood each spend some time teaching tricks to newcomers, but Darshwood also can’t help showing off a little. He blew some minds making a half dollar and an English penny switch places, show up in his pockets and move back and forth in a handful of different ways.

Neither of the magicians are on the payroll, but they frequently plug products available for purchase in the front of the store.

Several of the customers in attendance got excited about the magic they were learning. The hope is that they’ll come back to see the full-on magic shows. Braun’s also has a trick up his sleeve when it’s time to get quality magicians on the stage.

Visiting magicians such as Gregory Wilson, John Michael Hinton, Nick Locapo, Denny Corby, Nathan Kranzo and others bring plenty of talent. These are performers who probably wouldn’t  bother with stopping in Louisville if it weren’t for Braun’s other gig.

In 2014, Braun and Daniel Martin started up a consulting business called The Magic Firm. You bring in your magic show, and they help you figure out what works and what doesn’t. They help with the technical stuff — Braun is a guy who design tricks — but The Magic Firm also helps find and refine the theatrical elements that go beyond the mechanics, and help each show become one of a kind.

“We talk all the time about finding whatever that is that inspires you more importantly outside of magic,” said Braun. “Because if you find it in the side of the art form you’re already in, you’re going to become a parrot no matter what.”

Braun knows magic, but he also knows business. When a magician comes to work with The Magic Firm, they usually do a couple of shows in the J&B Theatre. Braun gets a neat show for his customers, and the magicians get an audience to try tricks out on. He uses one business to feed the other and continue to grow the audience for magic.

Which brings us back to Thursday night.

Among his many qualities, Clark always brings a sense of wonder with him when he performs magic. It’d be a mistake to call it “childlike,” but he always exudes the same feeling of discovery kids have when they are introduced to up-close magic. Unsurprising, this went over pretty well with the kid he’s teaching a magic trick to.

The night I visited, Clark taught Chris — age 8 — his first magic trick: how to make one little foam ball turn into two.

“I’m starting out with sponge balls because I have four, so it’s a mirror, two and two,” explained Clark. “I’m showing him what we call the four count sequence.”

The small sponge balls squish up and collapse pretty easily, making the trick ideal for young hands still low on the dexterity scale. After a minute or two and several attempts, Chris got the trick right.

“This is a good first trick, because it shows you the basics of sleight-of-hand,” said Clark.

At the other end of the table, Darshwood worked card tricks with Harrison, a 15-year-old high school kid. Darshwood is a little slicker than Clark, and Harrison wore the universally-understood teenager expression of, “I’m too cool and refuse to be impressed.” But it turns out Harrison has been studying magic at home. Once Darshwood proved that he wasn’t going to talk down to Harrison, the two started talking shop.

At another table, Braun worked card tricks, and his pupil had clearly been to the shop before. He brought a thick book with him. There were highlighted portions scattered across every page, sticky notes saving particular passages. This guy was serious. He was completely swept away by the sleight-of-hand he saw, hoping to replicate it.

And not to prestidigitate a falsely saccharine ending, but that actually is the real magic at J&B. You can be 8 or 82, you can be the kid learning your very first trick or the guy who helps magicians all over the world conjure wonders, and it won’t matter. Even if you know every single step of every single trick, as long as you are willing, you can still be swept up in the flash and flourish of card tricks, the disappearance of English pennies and the lore to be found in secret theaters.