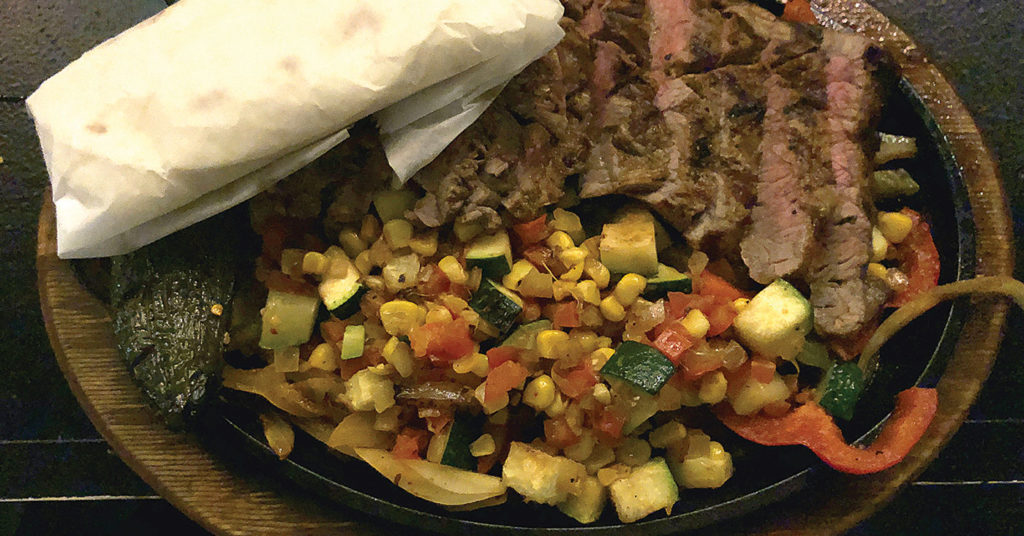 The tall, gray, stone sanctuary of Calvary Lutheran Church was approaching its 90th anniversary when its congregation, aging and declining in numbers, regretfully decided to pack it in. “Emptying the building. Sad work,” the Rev. Austin Newberry wrote in February 2016 in the final post on Calvary’s Facebook page.

But now the lofty nave is filled with a new kind of spirit as Noche Mexican BBQ settles in after opening in early August.

Walk up to the building at the corner of Bardstown Road and Roanoke Avenue, and you might think it’s still a church.

Open the doors and come inside, and you’ll find something completely different. Gone are the altar and pews, although bright organ pipes remain, as do the huge, stained glass windows. A large Day of the Dead skull gazes down from high above the far end of the room.

The walls are painted a fascinating color, blending gradually from light adobe below to midnight blue above, fading like a good ombré as you look toward the ceiling. Tiny lights on strings dance like stars in the darkness above; large, cylindrical, orange and white pendants hang in stately rows.

A well-stocked bar with a glowing, lavender face lines one side of the large room; an open kitchen offers a good view of chefs at work in the back. Comfortable banquettes line the other sides, with rows of pebble-textured, black tables and small but comfortable contour chairs filling the main room. Tables are set with good flatware rolled in soft, cloth napkins.

We dropped in on a Sunday evening, grateful that we had reservations since every seat appeared to be taken.

The room was dark enough that it was hard to make out the menu. We persevered, though, and discerned an interesting mix of smoked meats and traditional Mexican dishes.

Five carnes — smoked meat choices — range from $12 (for a half-pound of pork carnitas) to $30 (for a full pound of brisket).

Aperitivos (appetizers) include chile con queso and guacamole ($9 each) and Texas-style smoked wings ($10). A trio of salads are $5 to $9, and nine antojitos (small plates) range from $8 (for a cheese quesadilla) to $15 (for smoked brisket nachos).

A variety of dinner courses include five burritos, a half-dozen tacos and five fajitas; almost everything is priced between $12 and $20.

Our friends Carol and Kevin joined us as we sampled a little of this and a lot of that. Complimentary chips and salsa were exceptional: Extra-thin chips were lightly flavored with chile-lime. The salsa was a finely textured chile-tomato mix with enough heat to impart a gentle burn.

Guacamole ($9) was top-notch, and there was plenty of it. It was chunky, thick and fresh, with tiny flecks of tomato and onion and a palate-cleansing lime back note.

Arrachera steak from the carnes menu ($22), consisted of about 10, thin slices of marinated, spiced flank steak, cut across the grain. It showed light grill marks and was still pink in the middle. A little more char on the edges would have been welcome, but it was smoky, spicy and good. It came with a charred chile pepper, a big pile of veggies including yellow corn niblets, grilled onions, tricolor bell peppers, chopped zucchini and fresh tomato. It was served with three flour tortillas in a paper packet on top.

Chicken fajita quesadilla ($12) also got two thumbs up. Boneless chicken, Monterey jack cheese, onions and bell peppers were grilled together, sandwiched in a flour tortilla, cut into six wedges and dressed with pico de gallo and chipotle crema, with a dab of guacamole. The cheese melded the ingredients into a memorably smoky, complex mix.

A carne asada burrito ($12) kept up the pace: An order consists of two smallish items rather than one bigger than your head, and that’s fine with me. Slices of tender, smoky and spicy grilled beef and jack cheese were tightly rolled in tortilla wrappers and served with pico de gallo and crema alongside.

A couple of sides, spicy corn-off-the-cob esquites and cheese-and-corn calabacitas soup (both $5), were filling and good.

Service was friendly but inattentive, perhaps an excusable lapse in a full room that surely kept the servers in the weeds.

With a fascinating, sage-scented alebrije cocktail ($12) made with two fancy tequilas and pineapple juice, our share of dinner for two came to $56.18, plus a $12 tip. •

Noise level: When the cavernous former sanctuary is full, the sound roars as it likely did when the old church’s organ and choir rang out “Ein Feste Burg.” Conversation was possible but took some effort at our banquette on the side of the room. (Average sound level was 81 decibels, approaching the sound of a leaf blower, with peaks to an ear-shattering 92.5 decibels.)

Accessibility: The main entrances to the 93-year-old church are up many steps, but wheelchair users (and everyone) can get in a back entrance via a long ramp from a parking lot with marked handicapped-parking spaces. The dining area is accessible, except for the old choir loft, and modern restrooms are fully accessible.