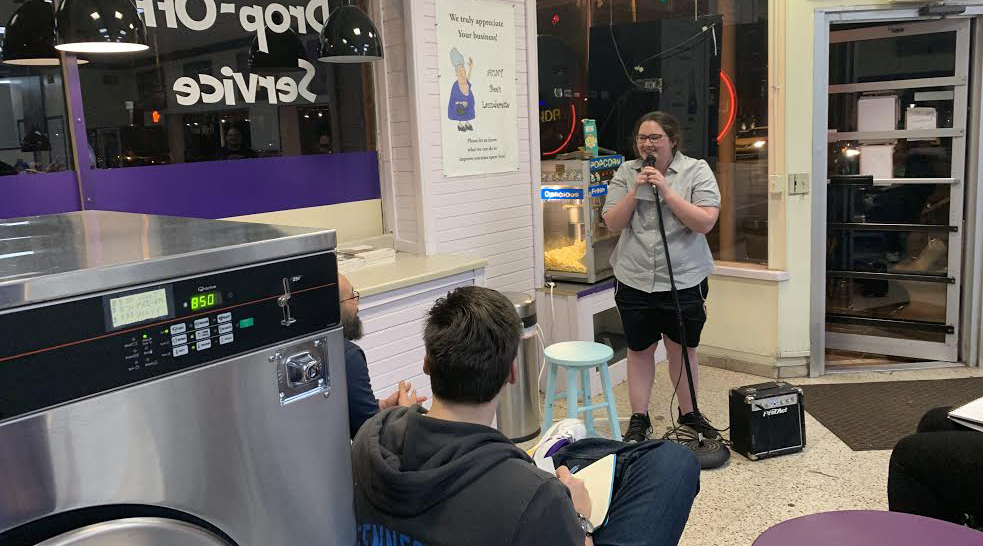 Once upon a time in Louisville, stand-up comedy meant one thing: The Comedy Caravan, or The Caravan, as it’s currently known.

But, those days are long past and the “alt-comedy” scene in Louisville — which really just means anything that isn’t The Caravan — is blooming. It has spread out across the city to venues including Kaiju, Zanzabar, Wicks Pizza and even odder places, such as a reoccurring show at the downtown hotel Aloft.

House shows also are popular alt-comedy destinations. And the current house show hot spot is run by a comedy group known as The Dog + Mouse House. The outfit is run by Louisville based comics, June Dempsey and Dan Alten. What started as a string of shows in Dempsey’s basement has expanded in recent months to venues that are even less traditional than a punk music club or a pizza parlor; places such as Aunt Bee’s Launderette at the corner of Second Street and Ormsby Avenue in Old Louisville.

“Stand-up is an organic and live art form, and so often you’re in the same club or bar-type environment that getting around different stimuli can really create something special,” said Alten.

We visited Aunt Bee’s on a recent Tuesday night to catch Dog + Mouse’s Lady Laundry Mic open mic and to see what other ideas they might be percolating.

Aunt Bee’s is a nice place. The washers and dryers work, the vending machines are full, and there is even complimentary, fresh-popped popcorn. When LEO arrived on the scene, Dempsey was just beginning to load in, and one or two comics were already waiting, jotting down thoughts and jokes in notebooks.

Dempsey got started in comedy in early 2017, after a breakup.

Dempsey read an article — in the LEO! — about the queer side of the Louisville comedy scene.

Dempsey didn’t find a date, but they did find an open mic sign-up sheet completely devoid of women.

They’ve been doing comedy since and started getting booked quickly. Before long, they met Alten.

Alten has been in the comedy scene since 2012, having moved here to figure out what to do with his life after he realized his journalism degree from IU Bloomington wasn’t terribly useful.

He began producing comedy under the imprint of LAFF Fest in 2014.

“It started as Eric Sorgel and I in early 2014 as a banner to promote comedy in town so folks could see our logo and know it would be a good show that wasn’t homophobic, transphobic, racist, sexist or hacky,” said Alten.

LAFF Fest was responsible for a number of house shows, until the comedian living in said house moved out in early 2017.

By August 2017, Dempsey had bought a house, and the shows moved to Dempsey’s basement.

Dempsey explained that the penchant for putting performances in strange places came from a joke Alten made: “Dan had this idea about doing a show in a Waffle House, because it would still be a house.”

While the Waffle House show has sadly never materialized, the idea of odd venues stuck around. Then, when an episode of comedian Maria Bamford’s Netflix show “Lady Dynamite” featured someone doing jokes in a laundromat, Dog + Mouse decided to make that fictional scenario a reality. They started trying to find a venue, but didn’t have a lot of luck at first.

“We went to a lot of different laundromats and they were like, really negative, and didn’t want anything to do with it,” Dempsey said.

Comedian Annam Choudry helps produce the laundromat show, and she believes that adverse reaction came from a corporate mentality. Thankfully, Aunt Bee’s doesn’t have that. At the Aunt Bee’s show LEO attended, Choudry took a moment to offer her thoughts on the speed bumps they encountered looking for a venue and why Aunt Bee’s owner Steve Uesseler was a perfect fit for the laundry mic concept.

“This is local, the guy who owns it. He’s part of the local community and the Second Street Neighborhood Association,” said Choudry. “I love the community vibe.”

That community vibe is possibly indicative of the fact that not only are the regular customers at Aunt Bee’s from the neighborhood but some of the comics are, too.

“I live in Old Louisville,” said Alten. “And there is so rarely a show I can go to that I could walk to.”

The non-comedy club locations of these Dog + Mouse shows end up also addressing the issue that many neighborhoods in town are — for lack of a better term — comedy deserts. Dempsey’s house is also the only comedy to be found in their neighborhood in The South End.

Dempsey jokes that the laundromat and the senior center both offer a captive audience. Additionally, there are benefits to when the senior citizen shows are held.

“I’m like, OK, I can do this on a weekend at like 11 a.m. or 2 p.m., so its not intrusive to any other shows that would happen,” said Dempsey. They added, “Laughing helps dementia patients.”

So Dog + Mouse brings comedy to the laundry, the senior center, the basement. Where else?

How about the Laser Dome?

The temporary dome with laser light shows was part of a six-week-long event at Paristown Point. Alten worked there over the holidays and saw an opportunity to do an interesting show before the dome came down in January. They did two shows in one evening: one for adults and one for kids.

“Kids laugh.Teenagers laugh. Babies laugh. Everyone likes to laugh, yet so often live comedy is in places geared towards 25 to 60 year olds who like to drink and can spend money,” Alten said. “We’re just working to redistribute comedy where it’s needed.”