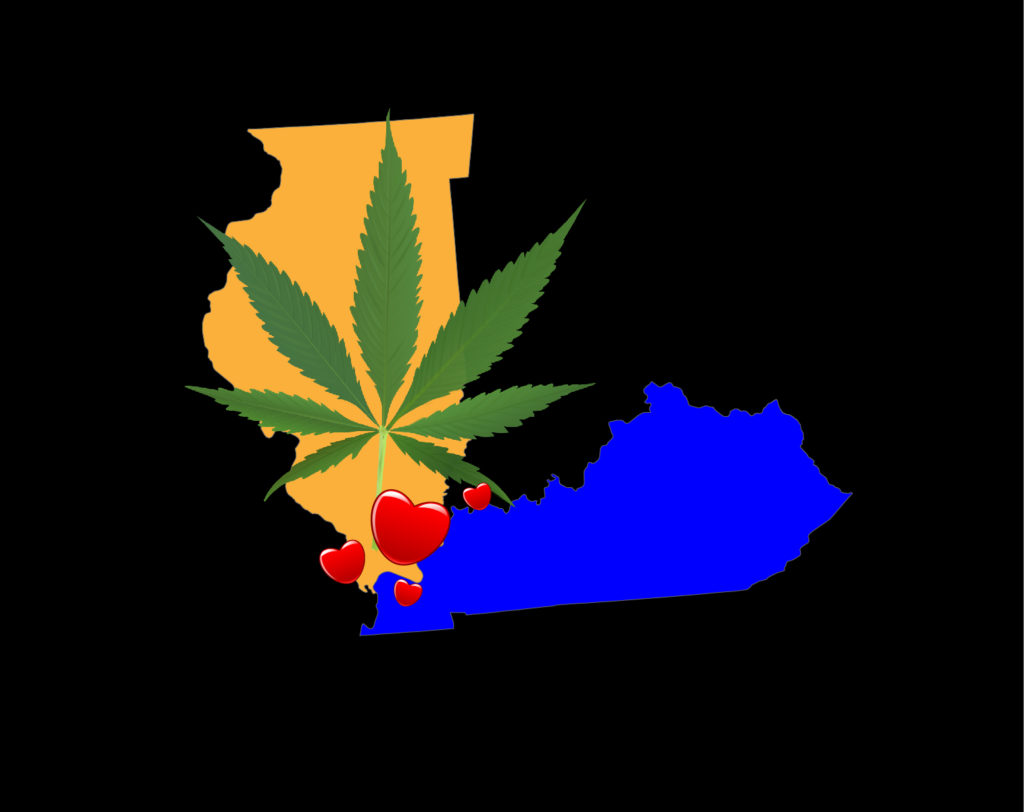 [Ed. note: This story was updated to reflect a last-minute license approval that means Louisvillians are even closer to an Illinois weed dispensary.]

As of Jan. 1, Illinois became the first state bordering Kentucky to lift restrictions on recreational, adult use of cannabis, six years after it legalized medical marijuana.

The Bluegrass State still has not passed its own brand of marijuana legalization, medical or otherwise (lawmakers will have a chance to do so this month with two prefiled bills), but now Kentucky residents over 21 can legally buy marijuana in Illinois.

So, where are the dispensaries? How much can you buy? And where can you use it?

Here is your guide to taking advantage of legal pot in Illinois.

Where You Can Buy It

Thirty-seven dispensaries have been granted licenses to sell recreational marijuana. Most are in and around Chicago, but there are closer shops to Louisville, many of them in small towns.

A drive just 17 minutes longer takes you to the Champaign-Urbana metropolitan area, home to a university, around 87,432 people and two dispensaries: NuMed and Sunnyside.

You could make it a vacation by driving five or so hours to Chicago, where you’ll find 10 dispensaries and 11 in surrounding cities and suburbs.

For recreational marijuana’s first year of legalization in Illinois, so far only existing medical marijuana dispensaries have been allowed to apply for licenses, so more shops in cities closer to Louisville might open eventually. Municipalities do have the option to prohibit the establishment of dispensaries, and some have.

How Much You Can Buy

Out-of-state visitors are allowed to purchase up to 15 grams of cannabis flower, 2.5 grams of cannabis concentrate (such as oils, dab or kief) and 250 milligrams of THC within cannabis-infused products (including edibles and tinctures) — as long as you present a valid ID.

But you might not be able to buy even that much — at least within the first few weeks, and possibly months, of legalization.

On its website, Numed says that flower and concentrate products, particularly, are expected to be in short supply. (Edibles and vapes are a better bet). Thrive, which owns dispensaries in Harrisburg and Anna, Illinois, said on its Facebook page Jan. 2 that it’s out of stock for recreational users. Sunnyside dispensary is allowing only recreational customers to purchase one product per category.

Check dispensary Facebook pages or call for more updates on their supply.

How Much It Costs

At the Sunnyside and NuMed dispensaries in Champaign and Urbana, prices range from around $18 for 1 gram of flower to $81 for a 500-milligram vape cart.

Illinois expects to generate $57 million in revenue for the state in the coming budget year by taxing marijuana and collecting licensing fees.

Where You Can Use It

So, you’ve managed to score some of that precious, limited ganja and now want to light up? Well, you can’t do it in the dispensary parking lot — or any public place in the state of Illinois, actually.

That was a rule included in the bill that passed the Illinois legislature, which defines a public place as anywhere you “can reasonably be expected to be observed by others.”

Illinois municipalities do have the authority to designate special places for marijuana use, such as smoking lounges or in dispensaries, but neither Chicago nor the cities closest to Louisville have done so.

According to the Chicago Tribune, however, the city’s mayor and interim police superintendent announced in early December that adults would not get in trouble for consuming marijuana on their porches or in their backyards. The penalty for consuming marijuana elsewhere in the city is a $50 ticket for the first offense and $100 for the second.

But, unless you’re a Kentuckian who has the privilege of owning multiple properties in different states, you probably don’t have a stoop or deck to smoke on, and if you’re looking for a hotel to settle in with your spoils, you might be in trouble.

The Chicago Sun-Times reported that Hyatt Hotels, Hilton Hotels & Resorts and Marriott International have no-marijuana policies, at least for their Chicago locations. Bud and Breakfast, a website where you can search for “cannabis-friendly lodging,” lists only a few options available in the state.

In other places where marijuana has been legalized for longer, Airbnb descriptions often designate whether lodging is “420 friendly.”

With more widely-available forms of cannabis, though, it’s hard to tell when someone is getting high. Edibles, lotions and vapes — all legal in Illinois — don’t come with that inescapable, pungent odor associated with smoking pot.

Can You Take It Home?

The short answer is: no!

Marijuana is still not legal in Kentucky, and even if it were, the federal government considers pot a Schedule 1 substance, making it illegal to transport across state lines. Despite this, Illinois, Kentucky and Indiana State Police say they have no special plans to catch drivers carrying back pot.

“I guess my question for you is: How are we going to be able to identify those people?” said Sgt. John Yard, coordinator for Illinois State Police’s cannabis control office. “I would basically encourage people to use or enjoy their cannabis within the spirit of the law and not break the law.”

At least one driver has learned that.

First Sgt. Ron Galaviz, assistant chief public information officer for Indiana State Police, said that while it’s business as usual for officers, one driver crossing from Illinois into Indiana was caught with weed in their car after being pulled over for speeding.

And remember: Even in Illinois, driving under the influence of marijuana is illegal. Visitors may keep legally bought marijuana in their cars, but they are not allowed to use it, even when the car is not in use. Their marijuana must be stashed somewhere inaccessible and in a child-resistant, odor-proof container, traceable to where it came from, said Yard.

How To Make Sure Your Stuff is From Illinois

If you come across cannabis in Kentucky that supposedly came from Illinois, there is a way to check whether it’s legit.

Illinois requires that legally produced pot have a label with: a unique serial number that matches the product to its batch, the date of final testing and packaging and the ID of an independent testing lab, the date of manufacture and use-by date, the quantity of cannabis contained, a pass/fail rating based on a lab’s microbiological, mycotoxins and pesticide and solvent resident analyses and a content list. •