Andy, Andy, Andy, you are on your way to becoming a one-term governor.

Sure, you have been in office for less than a month, so it might seem too early to make such a dark statement, but your State of the Commonwealth speech flopped. It offered just more of the same kumbaya pablum that you peddled on the campaign trail to distinguish yourself from Gov.-reject Matt “Nasty” Bevin.

You are a nice guy, and you want to work with the Republican-controlled legislature. But don’t be the Ned Flanders of governors.

Yet, there you were — standing in front of a group of people over whom you have zero leverage, who have political reasons to see you fail and who owe you nothing (except they also hated Griswold). The state House and Senate, with supermajorities, have shown their veto override muscle.

What should you have said?

You should have offered your solutions for raising revenue — not just plead for collegiality and comity and list Kentucky’s myriad of needs. We know about those needs already. We are first on the lists we want to be last on, and last on lists we want to top.

You told us we are: “The third poorest state by per capita income, where 22% of our children live in poverty, where we are in the top eight of states in terms of hunger, where we have some of the highest child abuse and neglect rates in the country … ”

Show us the money! Show us the ideas for raising revenue. What’s the State of the Commonwealth? We are poor!

Out of your 4,200 words of speechifying, only 100 were about how you would pay for your generosity and grandiose, albeit not indefensible, plans.

Maybe when you deliver your spending plan in the coming weeks, it will be rich with revenue proposals, but you missed the best opportunity to sell it to us, the state.

As House Speaker Dave Osborne, R-Prospect, told reporters after your speech: “The only thing he didn’t propose was puppies. And you might as well just go ahead and throw those in, because it’s great to throw out wonderful proposals and ideas, but at some point in time we have to face the realities of how we’re going to manage those and how we’re actually going to fund them.”

Of course, he is right, and not just Republican kind of right.

How are you going to pay for the $2,000-a-teacher raise you had promised help close the deal with Kentucky’s teachers?

How will you pay for what you call “WHERE,” “a simple acronym that encompasses our Team Kentucky agenda”? Wages, Healthcare, Education and Retirement (public pensions). And the “E”? For Expensive?

No, he said, “The last E is for Example. I am committed to changing the tone in Frankfort because we have so much more in common than what divides us.”

And, then, you told us you want to speed up the Mountain Parkway project in Eastern Kentucky and build the I-69 bridge “to open up Western Kentucky.” You want high-speed internet in rural areas. You want to end cuts to our universities and community colleges.

To pay for all of this, though, the best you could do is talk tepidly about how gaming revenue goes to Indiana, Ohio and Illinois. You told us you support the sports betting bill, “but that shouldn’t be the end of the conversation. Because now, all of our neighboring states — most all of them Republican led — have embraced expanded gaming, while we are being left behind.”

Yes! For a brief, glorious moment we thought you were going to explain to the Republicans — your kumbaya buddies — why they must vote for expanded gaming and why they must vote for legalizing medical marijuana… and then stun them with brilliant plans for raising more money so we don’t suffer more cuts in a state that… is at the bottom of every list and the top of every list.

But, no, alas. You listed more needs… and then ended the speech with this soggy nugget: “I look forward to working with all of you and the rest of Team Kentucky.”

As governor, Bevin had so many flaws, but (my fingers resist as I type this) he was a realist: He identified the state pension as the single problem most threatening Kentucky. He was right, but his arrogance, hubris and narcissism prevented him from working with lawmakers and public employees to find a fix.

Your problem, Andy, is you need to get real about Kentucky’s most dire problem — its lack of money — and then focus on that. • 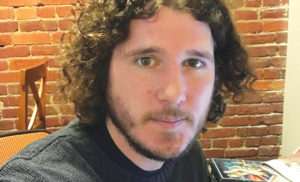