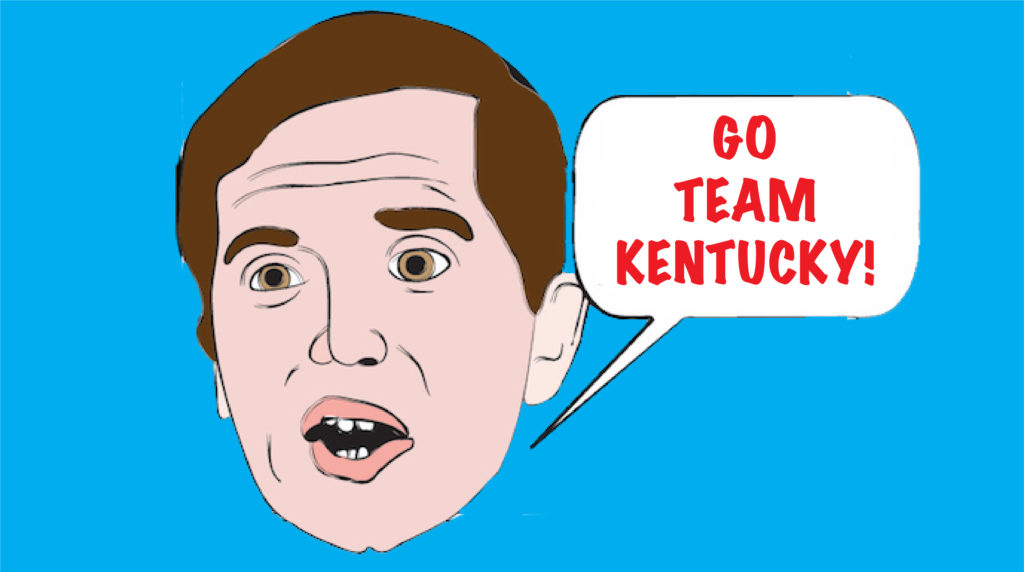 If you missed the broadcast on KET, the Kentucky capitol was bedlam after the conclusion of Beshear the Younger’s State of the Commonwealth. It was nothing short of an act of the Almighty that the building didn’t catch on fire and explode while he was delivering his address, as the smell of methane still haunts the building from the previous administration. Every canary on loan from the Pike County coal miners sitting on the railroad tracks fainted, noticeably between Beshear’s calls for unity amongst the state legislature in Frankfort.

Just imagine der Failüre’s rage, shortly before putting his TV remote through the television, over Beshear the Younger’s audacity after having stolen the governor’s office from him. Imagine his face, as he listened to Beshear state there’s racially fueled injustice in Kentucky’s justice system, as he had offered prayer as his solution. Imagine the horror in his Koch’ed out soul at the idea that healthcare is a basic human right and that his own campaign to kick everyone in need off the Medicaid rolls was a complete waste of his precious time and Kentucky’s tax dollars. Imagine the blowback after hearing that women ought to be paid the same wage as men, between his frantic shouts to keep scrubbing Santa’s gift out of the carpet and that he can still see the stain.

While it was touching that both the Gospels of Peter & Luke plus the Good Word of Stan Lee made it to the shindig, Beshear is owed the John Oliver Award for Not Connecting the Last Dot of the Puzzle. Beshear the Younger can talk about the radical concepts of universal healthcare, he can talk about equal pay for equal work, he can talk about the foster care system that is bursting at the seams, he can talk about the opioid crisis until the Oxycontin turns his lips blue, but it’s all talk and no substance until poverty is the one critical dot connected to the rest.

Beshear is signaling to the Powers That Be, whether he knows it or not, that they need not fear. Actual change will not take place in Kentucky, and it’s back to business as usual for the group that has an iron grip on the Commonwealth.

Please note that Beshear’s primary concern wasn’t that the members of our Commonwealth ought to be healthy for health’s sake. His concern was related to productivity, as the Powers That Be want good little cogs to show up to work because new yachts don’t pay for themselves — their employees without a union do.

Can we also recognize that the member of the chamber that Beshear referred to rationing insulin growing up is Louisville’s own, Charles Booker? If those were one of many struggles that his family faced, can we recognize that Booker actually represents this Team Kentucky and really ought to be our senator in Washington?

Beshear the Younger also traveled down the same endless road of higher education as a means to move up in America. The problem is that higher education isn’t for everyone, no matter what Devos’ ilk would like Americans to believe. Educated to employability ought to be the goal for Kentucky as a throwback to Gatewood Galbraith’s radical, common-sense approach that is apparently in fashion. Instead of pushing more people to sell themselves into educational debt and wage slavery or find themselves as cannon fodder for whatever new conflict Cheato-in-Chief wants to distract Americans from his impeachment, why not also raise wages in Kentucky so that everyone can have a better life instead of only the people who can afford the paywall to the middle class?

In response to House Speaker David Osborne’s fearmongering question as to how Beshear planned to fund all of these puppy proposals of sunshine and rainbows, we could also take Gatewood’s radical, common-sense approach and legalize marijuana. That way, we could keep the revenue in Kentucky instead of losing that high, err green, err revenue to Superman in Metropolis, Illinois because if you’ve ever set foot in any parking lot in the city, it might as well be legal already.

Or, if Kentucky wanted to make a real impact, AG Cameron could take whatever settlement from the pharmaceutical companies so the legislature could use that money to improve the lives of Kentuckians as well. Cameron’s smile at the Inaugural Ball told the citizens of Kentucky he was the happiest man alive at that particular moment, so he ought to take that radiant smile of accomplishment and put it to good use by helping the rest of the Commonwealth who are suffering, please.

Meanwhile in Louisville, the assertion that there’s racial injustice in the judicial system caused Officer McDouche to fly into a rage that would get anyone else arrested. His major concern was if the Brass of the Commonwealth were to start addressing racial injustice in the judicial system, how would he continue his reign of terror on the streets of Louisville?

“How am I supposed to protect and serve the interests of the city if I can’t rough up a suspect before planting drugs on them?” was his response when contacted by the Political Affairs Desk for a statement, spit flying from his mouth as if yelling louder would change the concept of accountability. “How am I supposed to get my bonus if we can’t fill private prison contracts in Kentucky when we can’t just lock all of Those People up?”

In response to stagnant wages and healthcare as a necessity, Karen told her coworkers, “If they wanted healthcare and a good job, they should’ve married up and worked hard like we did,” while looking at the Gucci shoes Officer McDouche bought her for Xmas.

She, however, did not mention how much her deductible had increased since last calendar year because it rolled over in January. The subject was a sore one for Karen, as Officer McDouche made her pay for the doctor visit out of her own pocket after taking a sick day on Wednesday.

Finally, to whatever senator stated that the State of the Commonwealth was scant on details, have you considered that if Beshear were to have gone any further in-depth on any subject he touched, that the point would’ve been moot?

The state house has been denied the common language of compassion and decency for their fellow man over the last four years, meaning the concept is going to escape his party completely and Beshear the Younger would’ve just been wasting his time and energy for the effort. •

Huntress Thompson is a poet & philosopher living in Louisville. She would like to thank Santa Claus for the Polaroid film, the Obi-Wan Lego figure and unexpected gift of a 1900 edition of “Leaves of Grass” — really, that was just too much, thank you. Additionally, special thanks to everyone at D. Nalley’s for their continued support of and engaging conversation with the Political Affairs Desk.