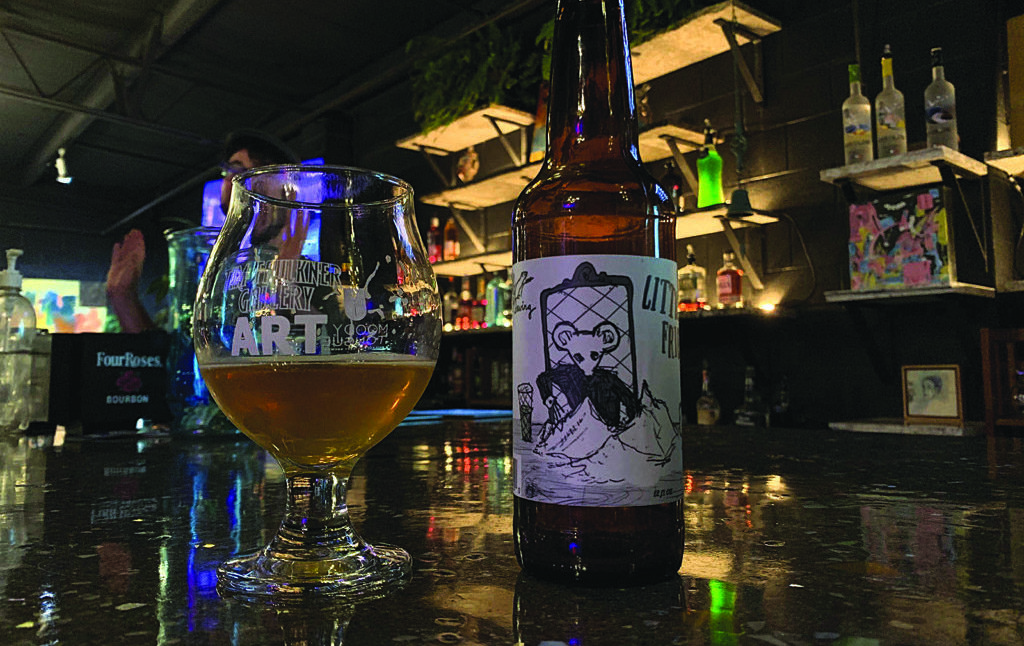 We have to admit, when we drink, think or talk beer, we have a bias toward breweries. However, we also have a weakness for trying as many different beers as possible, and that means occasionally removing the blinders and visiting (non-brewing) craft beer bars. Next to Baby Yoda, there are few things that delight us more than walking into a bar and seeing something on draft that we haven’t had before (which happens less than we care to admit). And, when thinking of establishments likely to proffer the rare, there is a good concentration of them in Germantown.

Apparently, we’re not the only ones who know Germantown is a hot spot to swig. At approximately 1 p.m. on Jan. 4, over 100 beer lovers, ranging in age from 21 to 75, strolled into Zanzabar. And, then, Four Pegs. And, then, Monnik Beer Co., Kaiju, Stopline Bar, Logan Street Market, Nachbar, Barret Bar and maybe a few others. It was the (seventh annual) Germantown Yuletide Biergang Walk, a first-Saturday-in-January tradition started by locals Frank Ford and Mike Kuntz as a way to connect with fellow beer lovers and support awesome local establishments. They have strayed from Germantown in the past (in fact, on the inaugural year, they strayed so far they walked seven miles in total). But they appreciate the renaissance of Germantown and the close proximity of at least a dozen establishments that take craft beer seriously.

Ford, a software architect and Paristown resident, and Kuntz, a “mostly retired” longtime Audubon Park resident, plan the stops on the walk based on hospitality and capacity, at least in part. “Most places would be happy to see us coming, thanks to the additional revenue and tips,” said Ford.

However, 100 thirsty patrons descending upon the relatively small False Idol Independent Brewers or Eiderdown during the dinner rush could obviously cause issues.

Thanks, again, to our aforementioned brewery bias, we are ashamed to admit how infrequently we have been to a few of these places that some would consider craft beer institutions in Louisville. Depending on what routes you routinely travel, you may consider these off the beaten path, perhaps even a little intimidating.

Nachbar: Dating from the 1930s, Nachbar is one of the OH, or Original Hipster, bars in Louisville. However, contrary to popular belief, neither a full beard nor strict adherence to the “no smiling” mandate you’ll find posted above the beer fridge are (firm) requirements for admission. Our main forays here have been for live jazz or improv on the spacious back patio. While featuring only 16 beers on draft, Nachbar also carries 50 North American and over 60 German, Belgian and “elsewhere” beers in bottles and cans. We found Pollyanna Brewing Co.’s (Lemont, Illinois) unfiltered lager and the frequently sought-after Lagunitas Brewing Co.’s (Petaluma, California) Willettized Stout (which is an imperial stout aged in Willett bourbon barrels) on our visit.

Kaiju: If you felt intimidated walking into Nachbar, you’ll be glad you had a beer or two there before walking into Kaiju. “Kaiju” means “a giant monster of a type featured in Japanese fantasy and science fiction movies,” and that pretty much sums up this eccentric establishment. Just try to play it cool as you study the anime action figures interspersed among the liquor bottles on the bar or the people in full costume playing “Dungeons and Dra…” you know what? Just do yourself a favor and watch the profile video on its Facebook page. Our first experience here was to see the “Star Wars Holiday Special,” which they were showing in the back room. And, if there are people in the city who can understand the 20 minutes of no-subtitle Wookiee dialog in that movie, they likely hang at Kaiju. You East Enders can think of it as a rawer version of RecBar, as there are plenty of gaming ops from pinball to PlayStation and, most importantly, good beer to accompany it! Kaiju has 12 beers on draft, usually with a few harder-to-find options. On this trip, that included Garage Beer Co.’s (Barcelona, Spain) Dark Times & Difficult Places, a pear-berry Berliner Weisse. There might have been more cool finds, but they were down about four taps thanks to the previous weekend’s beer walk. Thanks a lot, Biergangers!

Stopline Bar: This is one of those places that makes Louisville even cooler than you realized it was. Located inside Tim Faulkner Gallery near the Logan Street Market, Stopline is where you go for seriously good beer while you peruse art or attend an event such as the Below the Line bimonthly short film series that attracted a standing room-only crowd on a Monday night. Stopline has about seven beers on tap. On our visit, this included 3 Floyds Brewing Co.’s (Munster, Indiana) Robert the Bruce Scottish Ale, Moody Tongue Brewing Co.’s (Chicago, Illinois) Scotch Ale and Evil Twin Brewing’s (Brooklyn, New York) Bible Belt Imperial Stout. It also had offerings in cans/bottles including beers from Jester King Brewery (Austin, Texas), Funkwerks (Fort Collins, Colorado) and North Coast Brewing Co. (Fort Bragg, California).

Embrace your inner hip/geeky/artsy self and get some good brews while you’re at it. Prost! •