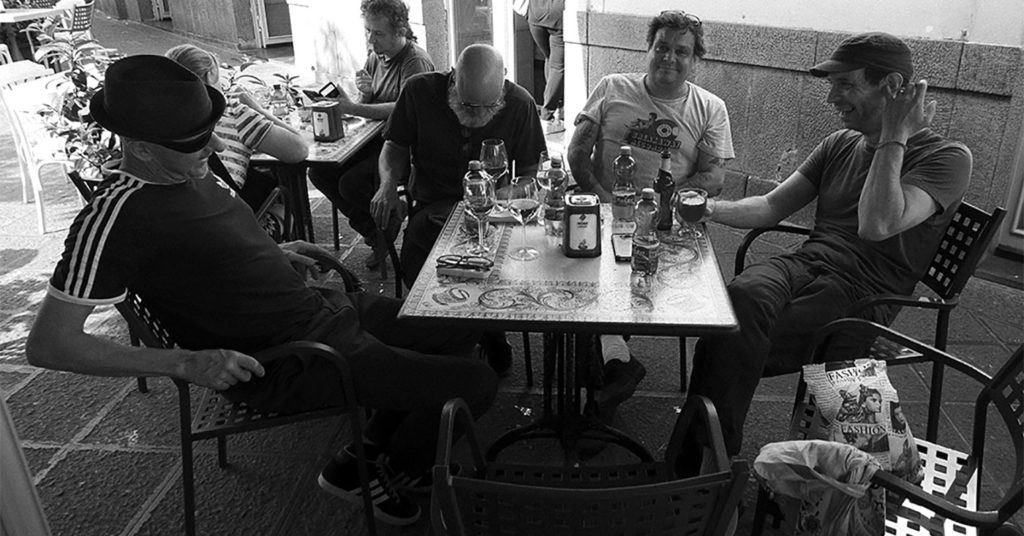 It is often difficult to express the complex feelings and ideas of existence. The band June of 44 named themselves after the time period of erotic correspondence between American writer Henry Miller and muse Anaïs Nin. And what Miller once wrote of Nin — “Sweet, treacherous acquiescence” — seems like a perfect parallel to those tricky existential questions. Founded by former members of Rodan, Rex, Lungfish and others, June of 44 were active from 1994 to1999 — and now they are back, and you can catch them at Headliners Music Hall this week. June of 44 guitarist and vocalist Jeff Mueller — who was also in Rodan and Shipping News — spoke with LEO about reconnecting with music made two decades ago, as well as the ’90s scene in Louisville.

LEO: For over 25 years, your music has been labeled in genres from experimental jazz to post-punk to math rock. Do you favor any one of these to describe the music you make?
Jeff Mueller: Not so much. With respect to all the genres that we’ve been identified with, if I had to apply a label to our music, I’d recognize us as underground. I’d like to think our sound is much easier assimilated and aligned to the tones of counter-culture and community, as the aesthetics and colors of our songs are widely diverse… not at all neatly folded in to a specific drawer. To me, at least.

From your debut 1995 album Engine Takes To The Water to 1998’s Four Great Points, you went through quite a sound difference in three years from edgy and somewhat minimalistic to a complex, electronic-influenced sound. What contributed to the transformation?
Our first record was basically an experiment largely influenced out of necessity by [guitarist/vocalist] Sean [Meadows] and my songwriting. We’d booked studio time, and ultimately, to have confidence that we’d be ready to record, it was essential to me that there be skeleton song versions to help direct us as a whole. We went from never playing a note together to having a full, finished record in about three weeks — that’s brisk! Each subsequent record was increasingly more collaborative, where our collective characteristics made for more mixed-up instrumentation and better songwriting.

With drummer Doug Scharin and guitarist/singer Sean Meadows having side projects, did this contribute to the eventual band split?
Not so much. We were all working in other projects in 1999.

The band reunited two years ago for a brief tour in Italy with Sicilian band Uzeda. How did this come about and what made you want to reunite?
We’d been asked to regroup a few other times throughout our 19 years apart. It either wasn’t the right time or the right situation. I don’t like reunions. For me, the strength and momentum of music has as much to do with the time and community it was cultivated in as it does with the sound itself. Regardless of how dear and significant, the concept of band resurrections has always hit me a little sideways. When Agostino [Tilotta, guitarist for Uzeda] called to ask if we would play at the Uzeda 30th party, we just felt like it had to happen. After all, you just can’t say no to family!

With over a 20-year hiatus, was it difficult to regroup?
For me, the most abstract and difficult part of reorganization hasn’t been eating crow on anti-proclamations about reunions, or, reacquainting ourselves with each other, or relearning the songs or mapping out the time to follow through with plans — all of those things fortunately have come relatively easily. The trickiest part is mining for the headspace I was in when we wrote this music, in order to bring anyone anything of worth — the crucial exploration lies in cerebrally visiting long-gone kitchens in old Louisville houses, in resurrecting relationships with psychotic friends that no longer breath Earthly air, in climbing back into a 23-year-old, hypothetical campfire heart. This work is tiring. I’d never want to blankly, academically go through the motions of performing our not-so-simple music — there’s much, much more to it than just the physical exercise of, sort of, proficiently performing a song.

It’s been rumored that you’re recording new music. What can we expect and when will it release?
Mum’s the word for the moment!

With music roots stemming from Louisville, is there a memory or place here that advanced your musical experience?
Do you know the book ‘White Glove Test’ that Drag City published a few years back? Steve Driesler wrote an introduction for it. He talks about Louisville nostalgia in a way that fully resonates with me. In describing the corner of Eastern Parkway and Bardstown Road, where there’s now been a Jiffy Lube for 20-plus years, there used to be a White Castle. Locals will, to this day, say things like, ‘You know where the White Castle was…’ when giving directions. Every Louisville corner holds some resonance and relevance to me. Manual High School, Jason [Noble] and Klye and Kristin’s house on Woodbine, the Vogue Theater, the old Unique Thrift Store on 18th-ish Street, the Rocket House, Café Dog, Tewligans, the Mercury Paw, Sparks, Uncle Pleasant’s, Charlie’s Pizzeria, an old, now demolished brick factory on River Road, the Fossil Beds, Kings Wings, Sweet Surrender, an abandoned house at Second and Hill, Beargrass Creek, Baptist East Hospital, a veterinary office in J-town, Crain, Kinghorse, Freakwater, the Guitar Emporium, a field in Cherokee Park, a backyard party in Anchorage… all these things, they continue to fold in. My experiences — I can see, feel and hear all of it like it happened or occurred just yesterday.

Louisville music has only continued to grow since the glory days of Slint and Rodan. How does it feel to be such an important part of the independent music scene in this city?
All I can say is that it’s an honor and always a surprise to be considered as part of the extraordinary musical community that Louisville has, and continues to cultivate. Only gratitude. •