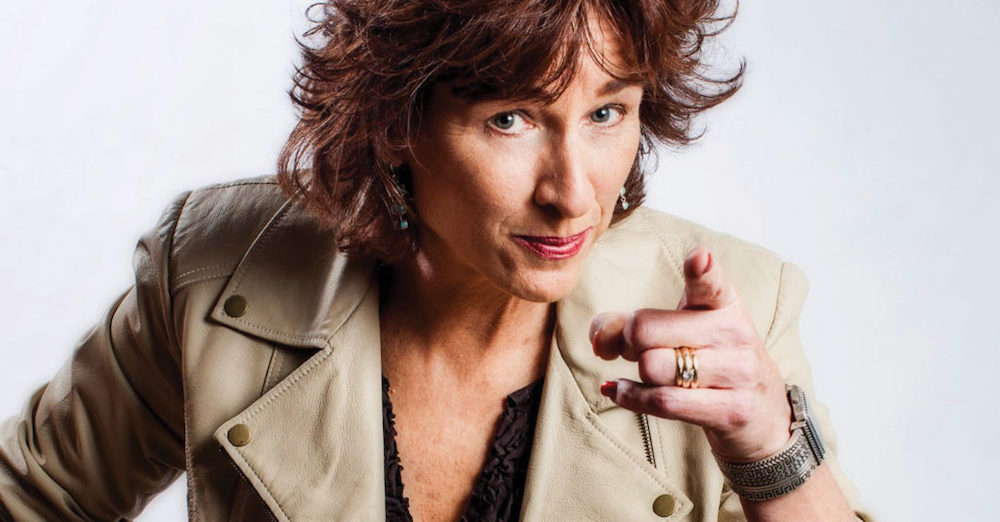 Here’s the punch line: “So, I got a ticket and a crotch full of iced tea.” Read our interview with Comedian Julie Scoggins for the rest of the joke. And go see Scoggins this week at The Caravan.

LEO: How was growing up in Charlotte?
Julie Scoggins: Oh, I shouldn’t even be a comedian. You’re supposed to have dysfunction growing up to be a comic. You’re supposed to be full of angst, and I just wasn’t. I don’t know why comedy has worked for me, but it just has. But maybe that’s why my message onstage is one of positivity. A lot of comics like to vent or bitch on stage. I want to be positive — people come to comedy clubs to get away from stress and politics. I don’t want to disappoint them.

With things are the way they are, is it difficult to find that positivity?
Not when that’s the way you are. That’s the way I am. I’m not going to watch TV to the point that I get emotionally involved in things I can’t control. Turn off the TV and go do something good. It’s like a train wreck — you can’t help but watch. But how does that help anyone? Just go do something else.

Last time we spoke, it was your first time headlining here. What did you learn about Louisville crowds from that experience?
I think that was my first time there, period. Do you remember [comedian] Tim Wilson? Oh, my God — I just worshiped Tim Wilson. I still think he was one of the most brilliant people to stand on a comedy stage. … It’s such a shame he passed away. But, to stand on that stage next to what I consider comedy greatness, was an honor. …

You didn’t start comedy until you were 37. Did you follow standup before doing it?
I obviously had George Carlin, Cheech & Chong and Richard Pryor albums. Being a white kid in suburbia, we would listen to Richard Pryor, then mom would come in, and we would yank the needle off the record so she didn’t hear what he was talking about. She was a pastor’s secretary. He did that bit about the ‘Exorcist’ where he talked about, ‘Get that cross out of your pussy.’ She walked in on that and confiscated the record. I don’t know what she did with it, but it was gone.

Pryor was pretty shocking for his era.
Look, if you start doing comedy now, you aren’t shocking anybody. You can go on stage and say anything you want. So, you better write good material and stuff people can relate to. Pryor got by because he was a brilliant writer [and] also on the shock value. That just doesn’t exist anymore. He was speaking from the heart — growing up in a brothel, crack addiction — he was an open book. Here I am, the daughter of a pastor’s secretary. Who the hell am I shocking?

You were once a trucker. Any good highwaywoman stories?
There was one time I was out in Utah, where the Bonneville Salt Flats are. There’s nothing out there. Nothing. … I’m going along the highway there. I had the accelerator on the floor going as fast as the truck will go, which is not that fast in something that size. Maybe 80. Next thing I know, I see blue lights behind me. I’m like, ‘There wasn’t even a bush for this dude to be hiding behind. Where did he come from?’ Turns out, they clocked me from a plane. So, I had a big cup of iced tea and dumped it in my lap. When he walked up, I was like, ‘I spilled my drink. I am so sorry. I didn’t mean to do anything. I was just cleaning up this mess.’ The whole bit. He didn’t buy it. So, I got a ticket and a crotch full of iced tea. •