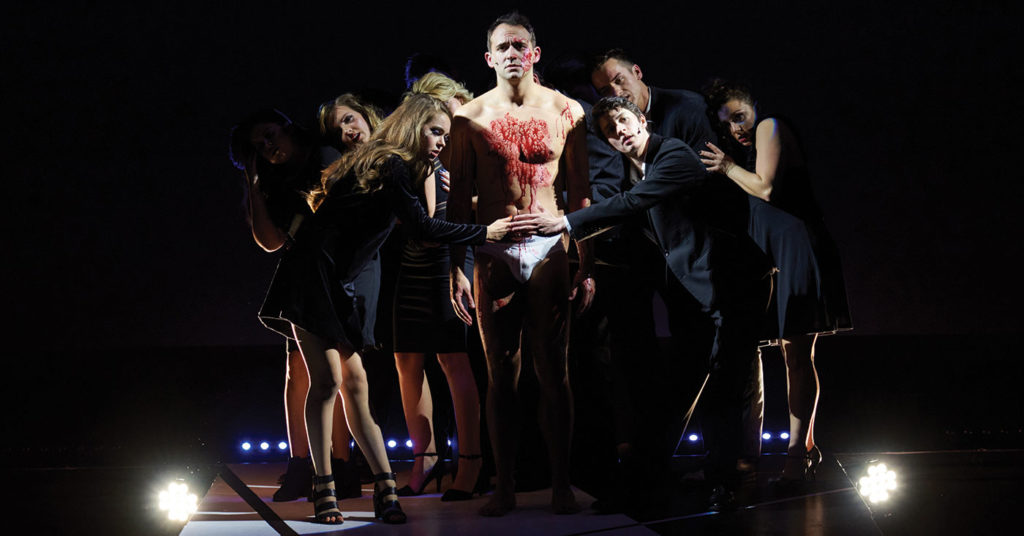 'American Psycho' from Acting Against Cancer. | Photo By Danny Alexander.

Acting Against Cancer has been known to take on unconventional or even dark musicals in recent years: a little known musical adaptation of Stephen King’s “Carrie,” a rock musical adaptation of “Heathers” and its upcoming “Murder Ballad,” to name a few. Their most recent production of “American Psycho” certainly follows in that theme. The book turned movie turned musical is set to electronic music composed by Duncan Sheik and the well-known story is brutal and chilling.

This has as much to do with the costume design by Jaclyn Lyons and staging choices as it does with the acting performances and the story itself. For instance, the choice to have Patrick (Remy Sisk) dressed in his bloody underwear for the majority of the second act made it impossible to distract myself from his murders, even for a second. In the end scene, Evelyn’s (Hannah Lechleiter) wedding dress is also stained with blood, and the ensemble is dressed in black and drops roses onto the stage, comparing the wedding day to a funeral.

There were a few issues with balancing sound throughout the show and, occasionally, it was hard to make out the lyrics, but most of the performers had enough power in their performances to be heard, particularly Sisk as well as Natalie Minton in the role of Jean. Jean’s moments in song are few compared to Patrick or his girlfriend, Evelyn, and in fact most of the songs are company numbers, but Minton shone in the moment of her solo “A Girl Before.”

Sisk plays Patrick with a feral, frightening energy whether he’s killing or taking a call at work. His Patrick may try to be the cool investment banker who has it all, but he always just misses the mark, which sends him further into an obsessive spiral. Spencer Korcz as his rival, Paul Owen, is cool and sneering, everything Patrick wants to be while at the same time almost interchangeable with Patrick.

It’s true that “American Psycho” can be a dark mirror into the greed and consumerism of our society. But it’s impossible to talk about how “American Psycho” reflects society without taking into account the elements of class. There’s no way to deny that if  Patrick Bateman were a poor man of color — or a woman or a trans person — living in a run-down neighborhood, this would be a wildly different story. It’s not for nothing that his first victim in the show is a homeless man (and soon after that two sex workers whom he abuses and, in the second act, murders). So like many stories that have been deemed universal, I do feel an instinct to push back, “This isn’t about humanity, this is about rich straight white men.”

Still, there are elements that feel uncomfortably true to our culture at large. Patrick’s obsession with serial killers, his shouting about the issues in the world and how we should “do something about it” (but never doing so) in many ways just feel like a day on Twitter. Even Patrick himself seems aware of the toxic consumerism, suffering panics at times in which he rants that, despite everything he has, he doesn’t feel like he fits in and still hates everything in his life. If his things can’t make him happy, what else is there?

Horrifyingly, the answer for Patrick is drenched in blood. •