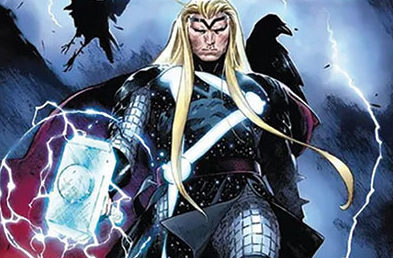 ‘Thor’ No. 1
Writer Donny Cates and artist Nic Klein
Review by Ashley Cornell, The Great Escape Louisville
From the dust of the War of the Realms arises a new king… and a retired god. To reign as the King of Asgard has been Thor’s wish since childhood, but now that the title is finally his, he begins to wonder: “What is a king to a god?” Thus, he is nervous to ascend to his father’s throne, and unfortunately it seems that something is going to rain on his coronation day. With Asgard under a constant pummel of “mourning rain” and Yggdrasil, the tree of life, showing signs of disease, the King of Asgard must turn to an unlikely companion to prevent the death of the universe. Not to mention that Loki makes an observation that might just mean Thor needs all the help he can get.

Donny Cates is picking up where Jason Aaron left off, and as one era ends, another begins. This is a Thor like never before, and it’ll be interesting to see where Cates takes this new version of a classic character. Seeing Mjolnir soar through the Ten Realms in the first few pages, narration reflecting the peace that followed the War, is a fine introduction to this new age of Thor. This opening sequence is also where we get the first look at Nic Klein’s art and Matthew Wilson’s lush colors, a harmonious relationship that truly comes together later on in the issue when more cosmic events are touched upon. • 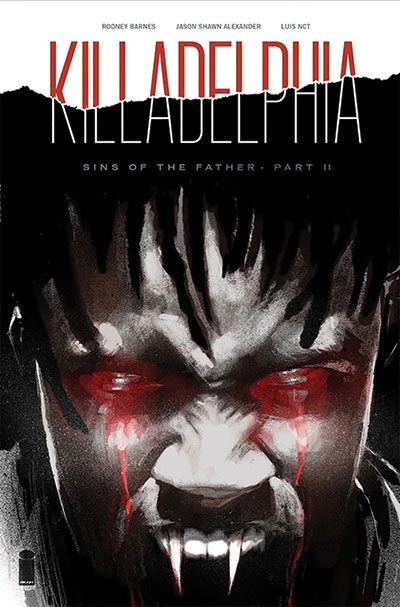 ‘Killadelphia’ No. 2
Writer Rodney Barnes and artist Jason Shawn Alexander
Review by Krystal Moore, The Great Escape Louisville
I picked up “Killadelphia” No. 1 simply out of habit. If it’s the first issue of a horror comic by Image, I will always pick it up. I almost always, at least, enjoy them, but once in a while something is surprisingly exceptional. “Killadelphia” has been one of those.

The art by Jason Shawn Alexander is perfect for the story, with dark, moody colors by Luis NCT but with a splash (literally and figuratively) when needed.

The story, by Rodney Barnes, opens in Philadelphia with a son mourning the loss of his father. Both are detectives in the city, but we quickly learn that Dad’s shoes are hard to fill. The son is bitter, and he feels he has to find out how and why his father was killed. He knows even though they weren’t on the best of terms, it’s what his father would have done for him.

The search turns up bizarre answers and issue No. 1 ends with a jaw-dropping, cliff-hanging ending that made waiting for the second issue almost unbearable.

Things get even more fascinating in issue No. 2 as pieces of this supernatural puzzle fall into place. And there’s a killer reason that “Killadelphia” takes place in the birthplace of our nation! 😉 •