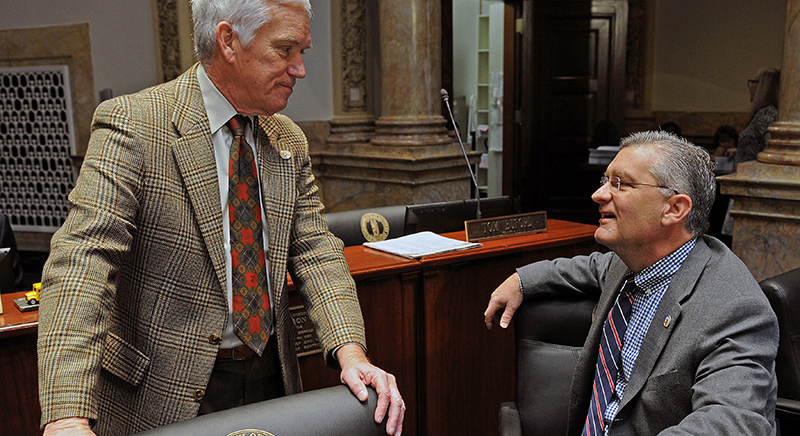 In a particularly bizarre mini-drama at the beginning of the 2020 Kentucky legislative session, state Sen. Stephen Meredith proposed and quickly withdrew a bill that would have allowed law enforcement to detain you for up to two hours if you refused to identify yourself and explain what you were doing.

The proposition drew biting social media backlash, which led the Leitchfield Republican to issue on the 10th day of the session what some took as a threat to two of his prominent detractors: Kentucky Sports Radio host Matt Jones and Courier Journal editorial cartoonist Marc Murphy.

“So again, my first reaction is to call these guys out and say, ‘If you’re man enough to step out from behind your microphone and your keyboard, we’ll meet personally about this, and I’ll convey to you how much I love this country. And it will be a lesson you will not forget,” said Meredith in an address on the Senate floor. He then added the contingency that he prays to God every day to make him a better person.

Jones tweeted in response, “In other news, I think a Kentucky state Senator may have threatened to beat me up on the Senate Floor today.”

Meredith’s bill would have applied to Kentuckians whom law enforcement “reasonably” suspected of committing a crime or plotting to commit one.

Murphy and other Kentuckians decried the bill as a violation of constitutional rights.

“Hey look who doesn’t understand the Constitution, or freedom, or America,” Murphy tweeted along with a link to an article about Meredith’s bill. “Or does, and hates them. Or you. @slmeredithky1”

Jones also tweeted about the bill, calling it “another terrible idea.”

Meredith said that he withdrew the bill with “a great deal of reservation” and lamented a lack of civility in society that could lead to anarchy.

…And we still have 44 days left in the legislative session!

Here’s an update on the other high jinks that the General Assembly has gotten into so far, including the status of the sports betting, voter ID bills and more. Also, as LEO went to press, Gov. Andy Beshear was scheduled to unveil his plans for the state budget, the biggest issue of this legislative session in a year when state revenue will fall short and ideas to raise it are few, but  Beshear’s wish list is long… and expensive.

A bill that would require most Kentucky residents to present a photo ID to vote passed in the state Senate 29-9 on Jan. 23 and is now before the House of Representatives.

Al Cross, UK’s director of the Institute for Rural Journalism and Community Issues told LEO that the bill is seen by some Republican officials as a way to improve their election prospects because Democratic voters are less likely to have the proper IDs.

But, Senate Majority Floor Leader Damon Thayer, R-Georgetown, who is co-sponsoring the bill, said that argument is a “red herring,” referencing a National Bureau of Economic Research study, conducted from 2008 to 2016, that showed voter ID laws had no negative effect on voter turnout for any specific group.

Thayer’s co-sponsor Sen. Robby Mills, R-Henderson, said, “When the law requires a photo ID be shown … confidence is raised in the election process.”

The bill’s voter ID requirements have been relaxed since the legislation was introduced. Kentuckians could vote with non-picture IDs such as Social Security cards and credit cards, which are already allowed by state law, as long as they affirm under the penalty of perjury that they are who they say are.

If a voter has no ID, they would be allowed to cast a provisional ballot, which wouldn’t be counted unless they showed up at the county clerk’s office by the Friday after Election Day to fill out an affidavit explaining the reason they did not have an ID.

Under the bill, voters could also get a free, non-driver’s license photo ID at their county clerk’s office. Currently, the same ID costs $30.

This bill would require physicians and other medical professionals to administer “appropriate and reasonable medical care” to live births after abortions and other forms of delivery or extraction.

“Born alive” is defined by the bill as breathing, a heartbeat, umbilical cord pulsation or definite movement of voluntary muscles. “Appropriate and reasonable medical care” is broadly referred to as “life-sustaining or life-saving measures.”

Abortion is already banned in Kentucky after 20 weeks. That’s when it is first possible for a fetus to live outside of the uterus, the World Health Organization says.

The law would apply to fetuses and infants that are delivered or extracted in all stages of gestational development, but parents could waive care if it would do no more than temporarily prolong death or if the potential risk to life and health outweighs the potential benefit of the treatment.

If medical professionals fail to comply with this law, they could be charged with a felony or have their license revoked for at least one year.

On Jan. 27, the Senate passed the ‘born alive’ bill 32-0. Spectrum News 1 reported that some Louisville Democrats did not vote on the legislation. It now goes to the House.

“We want to make sure that life is protected not only in the womb but certainly after the baby’s out of the womb,” said Sen. Whitney Westerfield, R-Crofton, a cosponsor of the bill.

Some changes were proposed for the bill that would require public employees to use their best efforts to support federal immigration law and would ban sanctuary policies in local and state governments and at public institutions that restrict employees from enforcing immigration law.

This is the Kentucky Senate’s No. 1 priority legislation. Under the changes, Senate Bill 1 would not apply to employees at domestic violence centers, child advocacy centers, health departments and rape crisis centers and public defenders. K-12 public school employees already were exempted.

Sen. Reginald Thomas, D-Lexington, has filed an amendment to the bill that would exclude public universities from having to work with federal immigration officials, but no action has been taken on his proposal.

The ACLU of Kentucky continues to oppose SB 1, which it refers to as a family separation bill, saying it could lead to unconstitutional detention of foreign-born Kentuckians, racial and ethnic profiling and weakened trust between local law enforcement and their communities.

Three weeks ago, the bill was sent to the Senate Judiciary Committee where it remains for now.

A bill that would legalize sports betting in Kentucky passed unanimously out if its committee. That was two weeks ago, but at the time, The Courier Journal reported that it had “good odds” to clear the House.

If passed, House Bill 137 could draw in at least $22.5 million in new tax revenue for Kentucky, according to calculations by Jon Farris with Commonwealth Economics. Currently, approximately $1.6 to $2 billion annually is illegally wagered on sports in Kentucky.