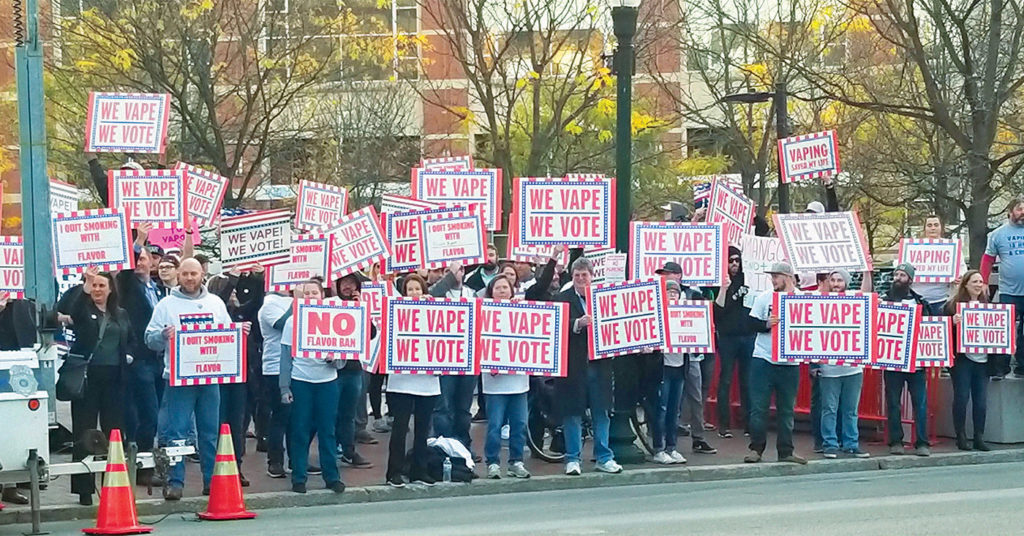 Supporters of vaping hoped to get President Trump’s attention during his rally in Lexington last month. | Photo provided by the American Vaping Association.

Brian Strietelmeier has voted Democratic in every presidential election since 2008. In 2020, the 34-year-old Prospect man might vote for a Libertarian or even Donald Trump.

Strietelmeier’s top political issue heading into 2020 is not healthcare, or border security or any of the other top issues that seem to have split the electorate.

The candidate who will win his vote will need to be pro-vaping, or at least open to the idea of studying it before making policy changes such as a flavor ban.

“I’m not asking them to come out, hold up a vape, you know, and take a huge rip and be like, ‘I’m with you.’ I mean, I would love it. But, I’m a realist,” said Strietelmeier, a print services specialist.

Strietelmeier is not the only vape bloc voter.

In a Morning Consult and Politico poll of 1,988 voters last month, one in 10 former Trump voters said they’d be less likely to vote for a presidential candidate in favor of banning flavors, and 8% said they’d be “much less likely.”

Other vapers interviewed by LEO said they may vote for a third-party candidate, while others said they might vote for Trump, but all were skeptical of Democratic candidates, most of whom have stayed silent on vaping.

They said they aren’t against all regulations, such as raising the age for vaping to 21 and requiring vape supplies to be sold in only specialty shops. Mostly, they don’t want a ban on flavors, and some just want a candidate who won’t demonize vaping.

On Sept. 11, Trump threatened to ban vape flavors, but in November, he backed off, and now vapers like Strietelmeier are still waiting to see if he disavows the idea completely. Libertarians, by definition, aren’t big fans of government regulation, and that would include vaping regulations.

Not all vapers are single-issue voters.

Danielle Lavigne, who lives in Allen County, Kentucky, said she will consider other issues such as education, job growth and lower taxes. But, the 44-year-old supermarket employee understands why others would let vaping decide their vote. Many issues that candidates bring up don’t touch people’s everyday lives, she said. That’s not the case with vaping.

“That’s something that affects my life greatly,” said Lavigne, who vapes in lieu of smoking, which she did for 26 years.

Still, some people doubt that there are many single-issue voters on vaping — on either side of the debate. Skeptics include Ben Chandler, a former Kentucky congressman who is now president and CEO of the Foundation for a Healthy Kentucky, which lobbies for more vaping regulations in the state.

He said he hopes lawmakers won’t hold off on passing vaping regulations because of what he called “electoral blackmail” from vaping lobbyists.

“They don’t have any evidence on their side that this is a healthy activity,” said Chandler.

Why Vapers Are So Ardent

LEO interviewed four voters, two of them Kentuckians, who said they plan to base their votes in the presidential election solely on vaping. Some have opinions on issues such as immigration, healthcare and abortion, but — after quitting smoking with the help of vaping — now they believe it’s imperative to public health to vote with their vapes.

E-cigarettes have fewer toxins than do combustible cigarettes, but a health expert who studied vaping, Aruni Bhatnagar from UofL, has told LEO that just because vaping carries X number of fewer toxins doesn’t mean e-cigarettes are X times healthier than smoking. Vaping still produces harmful substances, he said, and the long-term effects of the practice are not known. The recent vaping illnesses that have hospitalized 2,291 people led the CDC to urge people to stop using black market THC vapes and adding their own ingredients to nicotine e-cigarettes and other vaping products. This, after the additive vitamin E acetate was linked to the illness. But, the CDC said, there might be more than one cause and, as such, is advising abstinence from nicotine and THC vapes. Still, vaping has replaced smoking for millions of Americans, according to a report published last year in the Annals of Internal Medicine. Smoking tobacco kills 480,000 people in the United States every year.

Lainey Tipton, a 38-year-old graphic designer from Tennessee, said she smoked cigarettes for 12 years before switching to vaping. Both her parents died from smoking-related lung illnesses.

When asked why vaping has become her main political issue, Tipton said, “Because it saves lives.”

“Honestly, the day my mom died was probably the hardest day of my life, and I still just randomly burst out in tears,” said Tipton. “And it’s because of smoking.”

For the vapers who spoke with LEO, flavored vapes were integral for transitioning away from smoking cigarettes, although they have continued vaping. Vanilla custard is the one Tipton attributes to helping her quit.

Bring Out Your Votes

Most vapers interviewed by LEO said that they were consistent voters and registered with particular political groups, but most were free-flowing with their affiliation.

Carl Hughes, a 42-year-old vaper who lives in Pikeville, Kentucky, described himself as “not very political.”

“Which is why it’s easy for me to be a single-issue voter,” said Hughes.

Hughes recently switched from being an independent to Libertarian as Trump toyed with a flavor ban. “More needs to be done. He has to come to a decision,” said Hughes. “I’m cautiously optimistic that he’s going to do — Trump will do the right thing, and if he does, I’ll happily campaign for him.”

Cherry Lai, a vaper from California whom Hughes knows, said that she’s always based her votes on single issues. Last election, it was healthcare.

Lai, a retiree, described herself as a left-leaning moderate, but this election, she plans to vote for Trump.

Strietelmeier is currently leaning toward voting Libertarian, but he said that he would vote for Trump if he took a more pro-vaping stance.

Tipton said she voted for Libertarian Gary Johnson in the last presidential election, but she’s also considering Trump in 2020. “Nobody else has really spoken out on the issue, and I’m going to vote for someone who has a stance on it,” said Tipton, “and at least he’s gone, ‘We need to really consider what’s going to happen to the economy and to these people’s lives.’”

Can They Swing An Election?

Vaping diehards such as Gregory Conley, president of the American Vaping Association, a vaping advocacy organization, think vapers could impact the election.

“A lot of vaper voters are people that are largely disaffected,” Conley said. “And they may not be regular voters, but if you give them a reason to vote, they will turn out.”

He pointed to a poll conducted by a Republican firm, McLaughlin & Associations, created for the Vaping Technology Association, that showed 74% of 4,669 vapers surveyed in 17 “battleground” states would be less likely to vote for Trump if he banned flavored e-cigarettes. Eighty-three percent said they would be likely to vote for or against a candidate based solely on their position on vaping products, the survey found.

Conley said that vapers have already decided elections, specifically, the race that re-elected U.S. Sen. Ron Johnson of Wisconsin. Johnson thanked vapers in his acceptance speech, saying they made the results possible. Kaiser Health News reported that an owner of an online vape store at the time and former campaign manager for Herman Cain, Mark Block, rallied vapers around Johnson, raising $3,000 with a Vape PAC and sending out around 400,000 mailers. KHN also interviewed Tom Russell, the campaign manager who worked for Johnson’s rival, who said it was the Tea Party, not vapers, that had made a difference in the election.

Vapers have organized mostly online, with a We Vape We Vote social media campaign paired with calls to contact representatives, although there have been rallies, including one in Washington, D.C. that attracted around 3,000 people, according to Conley, and another that occurred in Lexington, Kentucky, the day that Trump came to town for a pre-election rally for former Gov. Matt Bevin. Somewhere between 75 and 100 people showed up to that one, hoping to capture the president’s attention.

Vapers seem to have Trump worried.

The New York Times and The Washington Post reported on Nov. 17 that Trump stepped back from a flavor ban partially to keep support from vapers. Perhaps coincidentally, he changed his mind about a ban while on the way to his Kentucky rally, according to an unnamed Trump adviser interviewed by the Post.

The few candidates on the left who have taken a stance on vaping have called for more regulations. For vapers, former New York City Mayor Michael Bloomberg became enemy No. 1 after allocating $160 million to push for flavor bans in at least 20 cities and states. Andrew Yang told The Washington Examiner that the country was “headed in the right direction” after Trump proposed a flavor ban. And, U.S. Sen. Elizabeth Warren has been dinged by vape enthusiasts for urging “regulators and companies to increase oversight [and] address health impacts of e-cigarette products.”