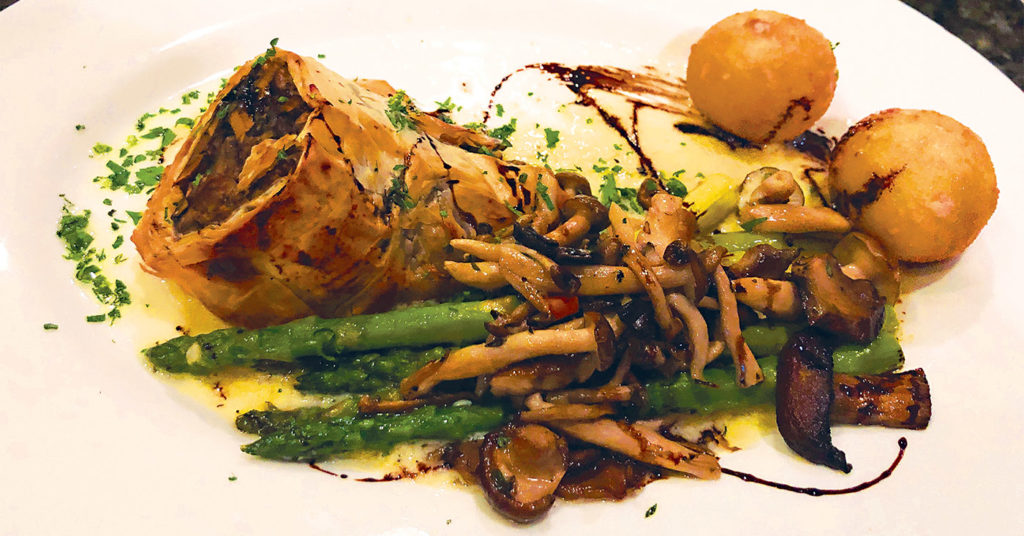 Mushroom strudel at Mesh is a thoughtful, impressive vegetarian entree

As smoothly as a runner receiving the baton in a fast relay, new hands have taken charge of the kitchen at Mesh restaurant without missing a step. If you’re looking for casual, modern elegance for holiday season dining, Mesh should definitely be on your list.

We dropped in for dinner recently with our friends Linda and John and found new Executive Chef Jason Cantara’s kitchen turning out first-rate dishes, with smooth, friendly service maintaining the high level that this Brownsboro Road destination has made its own since it opened in 2015.

Mesh, you’ll recall, is the striking modern building that rose over the ruins of the historic, white house that housed Bauer’s for more than a century, followed briefly by La Paloma and then Azalea. Times change, things move on and that’s all right. The new venue’s brick, stone, wood and glass create a warm environment that’s modern yet feels timeless.

Mesh is part of the Indianapolis-based Cunningham Restaurant Group, which also operates about 20 restaurants under 15 separate concepts in Indiana, Ohio and Kentucky, including the original Mesh in Indianapolis, with a menu quite similar to the Louisville shop’s. It’s no chain, though, and it’s clear that Cantara & Co. are free to work their magic in the local kitchen, including the studied use of locally-produced meats and produce.

About 18 dinner entrées are subdivided into sea (seafood and fish), land (meat and poultry) and garden (vegetarian). They range from $19 (for veggie pad Thai or grilled squash linguine) to $35 (for grilled venison). Eighteen shareable starters, salads and soups are from $6 (for Blue Dog bread or white bean chicken chili) to $16 (for tuna poke or a cheese-and-meat board). Three dinner sandwiches are $13 (for a Nashville hot chicken sandwich) to $15 (for a Hot Brown). Mesh’s bar features extensive wine and liquor lists and a good beer selection. I enjoyed a simple, tall Campari and soda over ice.

Blue Dog bread and butter are listed on the menu as a $6 item, but a complementary basket magically appeared on our table, and we didn’t ask any questions. Long, thick slices of seeded artisanal bread were grilled hot and crisp, buttered and sprinkled with chopped parsley and served with balsamic-laced olive oil and herbed whipped butter dotted with crunchy black Hawaiian sea salt.

Roasted chunks of yellow and red beets made a beet salad ($7) colorful and delicious. They were striped with a sweet balsamic reduction (an affectation that I’d be just as happy without), garnished with a fresh, crisp arugula salad and chopped pistachios and accompanied by a couple of crunchy, addictive goat cheese fritters.

A seasonal salad ($10) was well made and appealing, too. Not a mere bunch of supermarket mesclun, it started with perfectly-prepared field greens mixed with diced golden beets and topped with a toothsome mix of chopped walnuts, quinoa, bits of dried strawberry and mild goat cheese crumbles. The creamy tarragon vinaigrette was served on the side at our request.

A boneless, Indiana Amish chicken breast ($24) was spread over a few asparagus spears atop a mound of sweet, rather dry Yukon gold mashed potatoes with strips of prosciutto and brown mushrooms beneath. The chicken was covered with a creamy, pale-gold sauce touched with faint, haunting scents of sherry and blue cheese and topped with a bouquet of pea shoots.

From the “garden” menu, mushroom strudel ($22) was a thoughtful, impressive vegetarian entrée. A dark, rich-flavored mix of black, wild mushrooms and onions was rolled into a crisp cylinder of multilayered phyllo pastry, baked golden brown and plated with asparagus, sautéed white mushrooms and two more goat cheese fritters on a bed of tangy, lemon-chive oil and an earthy truffle soubise.

All six desserts were $8. We shared two with our friends and loved both. Thick, rich caramel pot de creme was served in a small, glass jar, topped with tangy, whipped buttermilk sprinkled with a few grains of black salt. It came with three, small, light and soft oatmeal tuiles that made a pleasant contrast with the rich pot de creme. A double chocolate stout terrine was impressive too: a long, thin slice stacked chocolate mousse, dark chocolate sauce, salted peanuts and crystallized ginger atop a thick double chocolate stout brownie crust.

Our friends grabbed the check before we could get it out of their grip. Thanks, John and Linda! Our share would have been about $80 plus tip. •

Noise level: Dining at Mesh on a crowded evening is not a quiet experience, but sitting enclosed in a high-back booth does help. The average sound at our table was 80 decibels (the sound level of a garbage disposal) with peaks to 87 decibels (approximating a food blender).

Accessibility: The modern building is mostly accessible to wheelchair users, although booth seating is up a step.