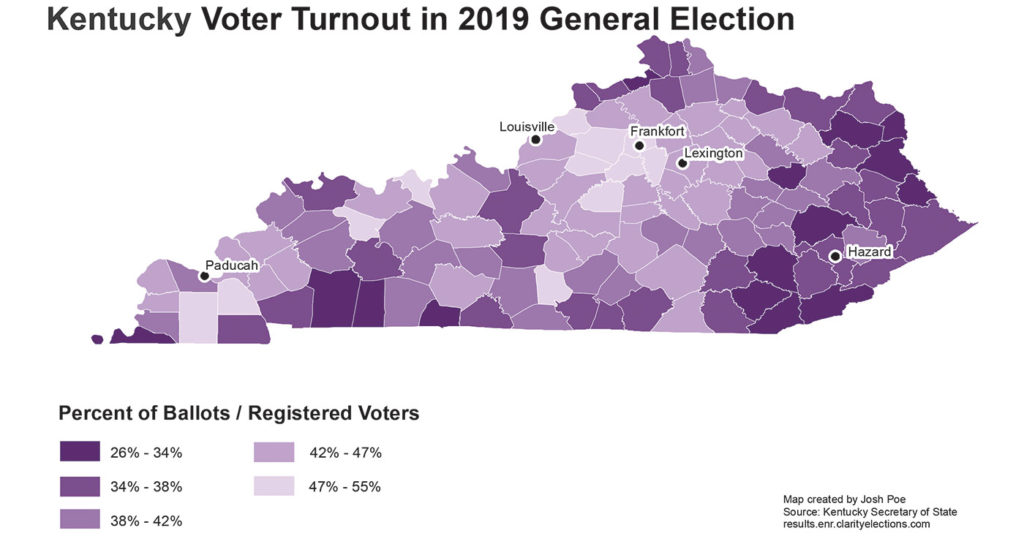 Kentucky had its most intense gubernatorial election in recent years last month. Both the official state Democratic Party and the state’s teachers organized aggressively against Gov. Matt Bevin. Bevin had his own powerful boosters — the sitting president and vice president of the United States came to Kentucky a combined four times this year to help the governor win re-election. But despite all of that buzz about the election, most of Kentucky’s registered voters didn’t back Andy Beshear or Bevin — they didn’t vote at all. We think of Kentucky as a red state. But it’s worth considering if Kentucky is truly a red-ish state with a ton of voters who are either disengaged from electoral politics or disenchanted with both parties.

We don’t want to overstate our case here.

The turnout last month was the highest for a governor’s race in more than two decades in Kentucky. It dwarfed the turnout in 2015 (31%). And Kentucky governor’s races aren’t ever going to get the attention from voters of presidential or congressional elections, where way more candidates are on the ballot. About 47% of Kentuckians voted in the 2018 elections and about 59% voted in 2016, when Trump was on the ballot. Kentucky’s 2016 voting rate was fairly similar to the national average across all 50 states (about 60%), according to the United States Election Project. It’s not as if no one in Kentucky votes — or that the state is particularly behind others on this front.

That said, we think the high rates of nonvoting, particularly in more rural areas, are an opportunity for both parties — but in particular the Democrats. The percentage of Kentuckians who live in rural areas is among the highest of the 50 states. So the urban/rural divide that currently describes politics both in Kentucky and nationally (urbanites largely vote for Democrats, while those in rural areas back the GOP) means the Democrats will keep struggling in Kentucky unless they do better outside of Louisville and Lexington. (Even with Bevin losing at the top of the ticket, Republicans won the other five statewide races last month.)

How will Democrats (or Republicans) appeal to these nonvoters? We’re not totally sure. What we know is that lots of politicians aren’t particularly exciting to Kentuckians — including Trump. The president carried Kentucky by 30 percentage points in 2016, compared to 23 percentage points for Mitt Romney over Barack Obama in 2012. But that’s not because Kentuckians loved Trump that much (he got 1.2 million votes, compared to Romney’s 1.1 million) but rather that Hillary Clinton only won 629,000 votes, compared to Obama’s 679,000.) •

Perry Bacon Jr. is a national political writer based in Louisville. He can be reached at [email protected]

Josh Poe is a geographer and scholar-activist in Louisville. He is the author of the “Redlining Louisville Storymap.” He can be reached at [email protected]