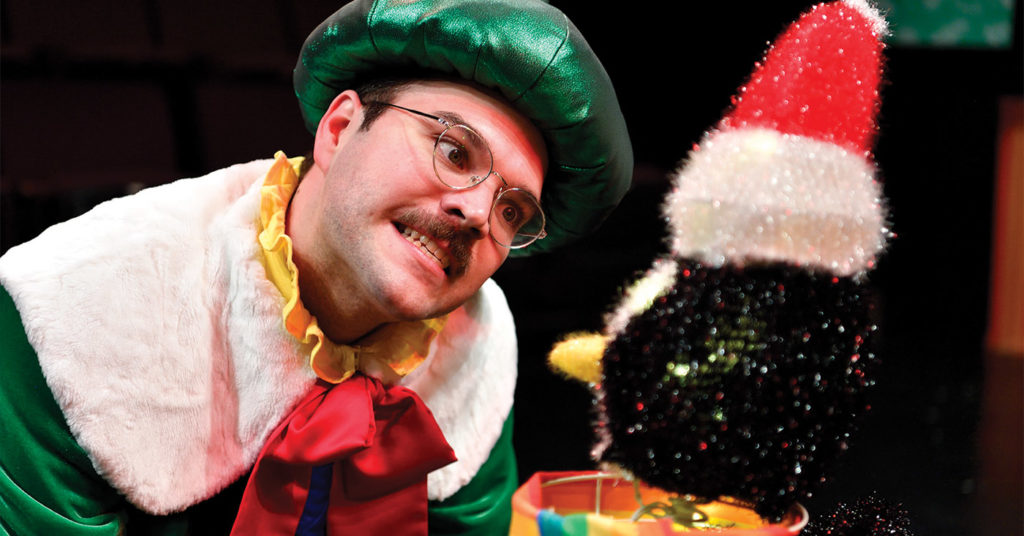 Warm-hearted Christmas plays about the magical, charitable nature of the season, or Christmas movies about falling in love as snow gently accents the scene, are all well and good, but sometimes we need something with a little more Christmas punch.

Those who work in retail understand better than most that Christmas can be at least as ridiculous and stressful as it can be charming and joyful. If that’s the Christmas you know, then “The Santaland Diaries” at Actors Theatre is the Christmas show for you.

The show is based on an essay by David Sedaris, one that began as diary entries about his time working as a Christmas elf at Macy’s Santaland in the late 1980s. It was adapted by Joe Mantello and directed by Meredith McDonough.

Rather than choosing a cheery elf name like Jingle or Snowball, he becomes Crumpet the Elf (played by Bear Brummel), which sets the tone for his attitude toward the whole experience. After all, he takes the job partly as a joke to begin with.

Sedaris’ characteristic wit lit up the entire one-act show with outlandish stories about coworkers and customers and offered just as many jabs about himself. Although it’s a one-man show, “Santaland Diaries” felt full of characters. As Crumpet told us about the different Santas he worked with, about the other elves he had lunch with, the demanding, sometimes bordering-on-cruel parents and his angry manager, he brought them to life as if they were on stage with him.

Brummel even incorporated the audience into his bits, lamenting to me about a workplace crush, passing his clothes off to a couple sitting stage left while he changed into his elf uniform. At one point, a few audience members were let inside the show after it had begun. Crumpet stopped to wave at them so that everyone turned their attention toward them. He then loudly whispered, “Let’s not be mad at them.” In the theme of irreverent humor that makes “Santaland Diaries” what it is, not even the audience is safe.

The show is largely unchanged from last year’s production. In fact, the only difference I spotted was a Pride flag scarf around the neck of one of the decorative penguins that Crumpet drags onto the stage in a sled. The little detail stood out from the other standard Christmas penguins and accented the jokes that tied back to Sedaris’ sexuality, like his fantasy of freaking out a rude customer by saying, “Sorry, I don’t date other guys,” followed by a gleeful whisper to the audience that actually, “I do.” But Brummel’s charisma and gift for delivering Sedaris’ humor makes the material feel fresh, and his ability to play off the audience makes it worth coming back year after year.

Brummel even managed to make unscripted fumbles into some of the funniest parts of the show. At one point, he opened one of the advent-calendar-esque doors on the backdrop of the set to reveal a chair and Crumpet’s lunch for his short break. As he sat down the chair and covered his uniform, he accidentally knocked over a juice box and the juice started running down the wall. Crumpet’s back was turned, and he continued his monologue despite chuckles and murmurs from the audience. Finally, he turned around to retrieve his lunch and called out, “Aw, come on! And nobody told me?” Whether Brummel noticed it when it happened or not, I couldn’t tell, but the delayed acknowledgment and the relatability — who hasn’t accidentally spilled their drink in the break room of a crappy job — fit perfectly with the atmosphere of the show.

“Santaland Diaries” may be a little cynical when it comes to the “Christmas spirit,” showing us the world behind the curtain of those magical Christmas displays at major retail stores. However, it’s far from joyless. Though the job Crumpet describes sounds objectively awful, he seems to enjoy it in a way, purely because it gives him something to make fun of. He’s a scoffer and, by his own admission, he’s “never been a good person,” but Crumpet never veers into that sort of pessimism that becomes condescending — perhaps because he pokes fun at himself as much as at anything else.

Instead, he’s shown as a struggling but aspiring artist in New York City, stuck in retail hell at the worst time of year for it, barely making ends meet and daydreaming about his favorite daytime soap opera, “One Life to Live.” When he meets coworkers who have actually played bit parts on the show, he excitedly fanboys, gushing about the actors his coworkers met, their impressions of them and how much he wishes that could be him someday. Crumpet is more relatable in his messiness than anything else, and the whole show seems like a perfect example of the kind of experience that might be miserable at the time but ultimately makes something to laugh about later.

He even shares a story of a mystery Santa he worked with on his last day who was so kind and genuinely jolly that even Crumpet was moved. In a warm and fuzzy moment that feels reminiscent of other Christmas classics, Crumpet starts to wax nostalgic about his time at Macy’s Santaland as it draws to a close and goes to say goodbye to his manager… only to find her locked in a screaming, cursing match with an angry customer as stark reminder of what Christmas truly means to retail workers. •