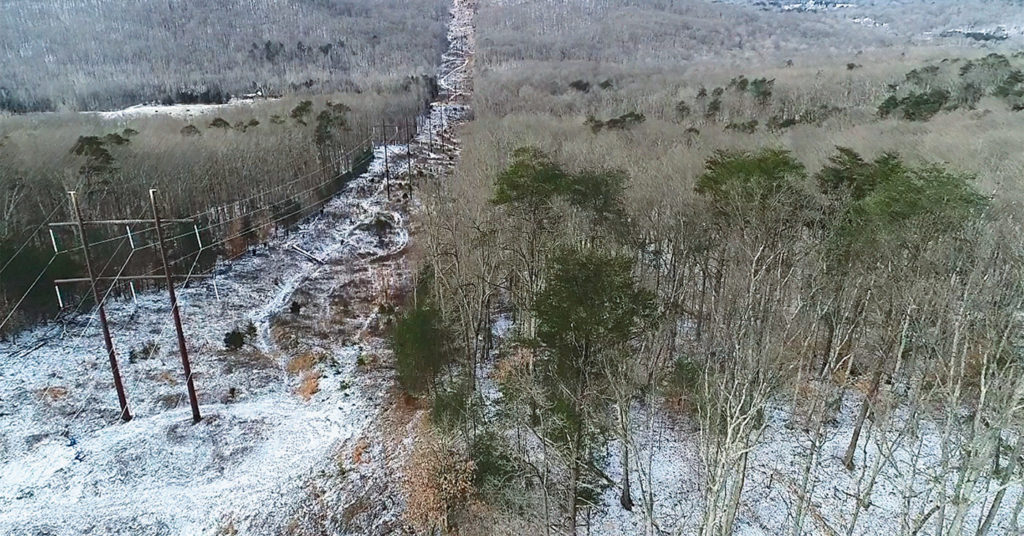 This photo from LG&E shows the existing easement that the proposed pipeline would shadow in Bernheim Arboretum and Research Forest.

First came a press release from Bernheim Arboretum and Research Forest about a rare snail found on its property in May. Bernheim claimed the snail would be hurt by a natural gas pipeline planned for the area by LG&E KU.

Soon after, the nonprofit launched a zealous publicity campaign against the project, with a web page, giveaways of bright-yellow “Save Bernheim” yard signs and at least 20 informational meetings in neighboring Kentucky cities, called Bernheim Under Threat Roadshows.

Now, LG&E is fighting back with its own information effort, including a web page that purports to debunk Bernheim’s arguments and a Google ad linking to the page. The utility has also made its case for the pipeline in customer newsletters and in a Courier Journal op-ed (as has Bernheim).

“I think what I would say I feel like is that Bernheim has been a little disingenuous with regard to discussing the facts that are associated with the project and with things overall,” Natasha Collins, LG&E’s director of media relations, told LEO. “And we would just ask that if we’re going to have a conversation about the project, if we’re going to have a conversation about what we’re doing, why were doing it and how it’s impacting certain areas, that everybody’s bringing all the real facts to the table and maybe not being misleading with some of those.”

Bernheim’s executive director, Mark Wourms, thinks the small details of the LG&E pipeline distract from the bigger issue: The the project would permanently damage an area of the Forest and set a precedent for desecrating conservation areas in the name of economic development in Kentucky.

“Knowing that places are wild and full of wildlife — and clean air, clean water, places of beauty — is important to everyone, whether you see them or not,” he said.

In This Corner: LG&E

Need is driving the pipeline project, LG&E says — a need to provide more natural gas to meet development growth. Seventy-one potential customers have been denied service so far in Bullitt County as the current line is at capacity, the utility says.

If the project fails, it could delay another pipeline along another route by five to seven years.

LG&E has acquired the majority of the land needed for the pipeline, it says. The utility has filed eminent domain lawsuits against Bernheim and other landowners who refuse to sell their land. Recently, the Kentucky Energy and Environment Cabinet filed a motion to dismiss the case against Bernheim. At issue is that the land is covered under a conservation easement. It claims the utility should have included the state on its offer to buy the land from the Forest because the Kentucky Heritage Land Conservation Fund provided Bernheim with a grant to buy the land on the condition that the Forest would not develop the area. LG&E said the state’s motion is “baseless,” and the utility plans to file a response.

LG&E says Bernheim has avoided telling people that the pipeline would run through a small area of Bernheim that’s not accessible to the public. It would cut through three quarters of a mile of Bernheim’s Cedar Grove Wildlife Corridor. A 100-foot electric utility easement already exists there, and LG&E’s pipeline would be built alongside it, adding what the company describes as a 50-foot easement.

The  pipeline construction area would be planted with grasslands, said Chris Whelan, LG&E’s vice president of communications and corporate responsibility. The trees couldn’t be replanted in the same area they were removed from, but LG&E plans to replace two for every one removed in another location.

Another misconception that LG&E says Bernheim has promoted is that the utility targeted the Forest with its chosen pipeline route. But, when LG&E started buying land for its pipeline, Bernheim had not yet bought its property where the pipeline would run. LG&E claims that Bernheim was aware of the project before it purchased the land, but this is one among many “facts” that Bernheim disputes.

LG&E’s pipeline would extend through less than a mile of Bernheim’s property, but it would still “destroy” eight acres of woodlands, according to the Forest’s website. And, Bernheim argues, that land the pipeline would harm is just as valuable as the parts of the Forest open to the public. Bernheim bought the 494 acres for the Wildlife Corridor to help wildlife living in other parts of its property. “Our goal is to make sure that the life that exists in Bernheim is not trapped on an island in an area of development,” Wourms said.

Bernheim calculates that about 4.4 acres of the Corridor would be set aside for the pipeline, and 1.07 acres more would be needed for an access road. An extra 2.6 acres would be needed during construction. In some places, the 50-foot easement LG&E says it has requested would be closer to 75 feet, according to Wourms.

Wourms said LG&E could revert four to six acres of the area into grassland, but that the existing woodlands is more beneficial to Bernheim’s wildlife.

LG&E’s eminent domain case could set a dangerous precedent for the state, according to Wourms, as it could be the first in  Kentucky to break a conservation easement set by the state.

Wourms says that it’s LG&E, not Bernheim, that has withheld information.

In 2017, the utility asked the Kentucky Public Service Commission for permission to not reveal the proposed pipeline route so that land costs wouldn’t go up and so landowners couldn’t resist the project, WDRB reported.

LG&E says that Bernheim was aware of the pipeline’s route before it bought the Corridor, but Bernheim says that the impending pipeline route was only a rumor. The Forest did not hear from LG&E directly until after it had purchased the property, said Wourms.

The route for the pipeline was finalized in 2019.

Another seldom discussed fact, reported by WDRB, is that a contractor for the pipeline project originally recommended an alternative path that was a mile longer than the one LG&E eventually chose. The recommended route would not have passed through the Corridor but instead ended at the Jim Beam Distillery. LG&E has told LEO it chose its current route based on reliability, cost and ability to serve future customers.

Since May, Bernheim has intensified its campaign to present its side of the pipeline story. Its web page contains several tabs and pages of updates on its opposition efforts and calls to action for concerned citizens.

In The Highlands, Save Bernheim signs dot lawn after lawn. A petition to “Protect the Cedar Grove Wildlife Corridor” has received 8,327 signatures and a rally in support of Bernheim attracted almost 400 people. Some $33,837 has been donated to the Forest in a span of three weeks, to be matched by a pledge from “longtime Bernheim supporters” Gill and Augusta Holland up to a max of $50,000.

As the Forest’s publicity efforts have increased, LG&E has begun its own information campaign.

The company’s web page about the project claims to tell “the fully story on Bernheim and the Bullitt County Pipeline.” The page started as a resource of information for stakeholder property owners, said Whelan and Collins, but they now believe it’s become a place for the public to learn more about LG&E’s side of the pipeline battle. The two spokespeople said that the shift has been organic, with more readers being drawn to the site as Bernheim’s publicity campaign picked up.

“I would say that this is something that we do all the time, so we have not been as aggressive,” said Whelan. “Our goal is just to educate our customers about what we are doing and why we have the need for it.”

The utility also has taken out an ad that directs some users to the web page if they Google “Bernheim.”

When asked about the ad, Collins said, “Our approach to educating our customers about energy saving tips, our programs and our infrastructure investments has always been to use a variety of communications channels to help best reach our varied customer base.”

The site’s landing page addresses primarily the pipeline’s impact on Bernheim, instead of on the other property owners in the project’s path. It features a map of the proposed pipeline route in relation to the Forest, as well as a section with details on how the company has supported Bernheim in the past.

Bernheim has created a blog post to respond to points made on the website, and, in a legal brief that the Forest filed with the Kentucky Public Service Commission, a lawyer for Bernheim called LG&E’s webpage “propaganda.”

As more people learn the details of the fight, whose side are they falling on?

LG&E claims that, inevitably, the public will sympathize with it, as long as people are fully informed.

Bernheim, unsurprisingly, thinks the opposite. “I think all of this helped Bernheim’s case,” said Wourms. “This [LG&E] is a private, for-profit industry trying to seize land from a private, not-for-profit conservation organization. And many people see it as exactly that, and they see it as archaic and unnecessary.”

The CJ published op-eds from Bernheim and LG&E the week of Nov. 11, along with over 40 letters solicited from the public. “Read them all,” said the paper in its online headline.

Altogether, online and in print, there were 43 letters in support of Bernheim and seven supporting LG&E, with at least one saying that more information was necessary before making a decision.

Douglas Armbruster with CORE5 Industrial Partners wrote that his company’s project — “the largest ever spec building” in the Louisville market, as well as two other projects — were in danger of not being constructed because of the pipeline battle.

“We fully support LG&E’s efforts to extend the main to this area,” he wrote. “These facilities come at great risk and expense to developers and offer the ability to attract good corporate users who pay taxes and employ local residents. There has to be a balance in all things, and this gas line extension offers great economic development potential to this part of the county while being constructed in the most efficient means possible.”

Among Bernheim supporters, a consistent theme was one of exhaustion with economic development taking precedent over environmental protection.

“A few acres of land are insignificant — hence the problem,” wrote Louisville resident Chad Money. “Shortsighted profit-oriented administrators ignore previous incursions, treating the thousandth assault on our precious resources as though it were the first. Like toddlers, they care only about what happens to them, now. I, for one, am tired of retreating. The opponents of conservation are relentless, unwilling to value intangible wealth over the cheaper kind, and — for now — easily defeated. I say draw the line here, rather than around the last tree.” •