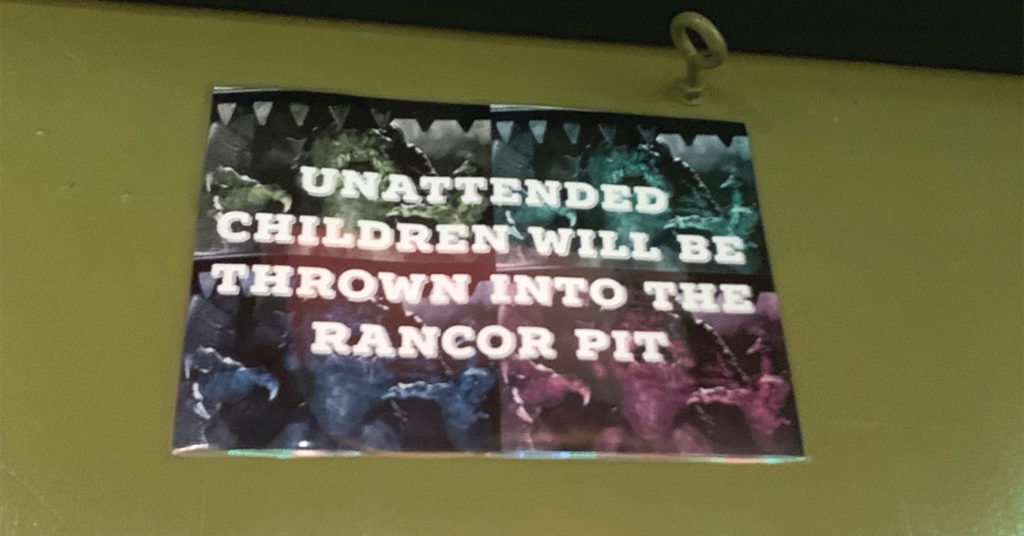 A sign for parents — and children — to heed in the Falls City Brewing Co.’s beer garden area.

Before having kids, we considered enthusiastically petitioning for adult-only days at the zoo and animated movies. Now, with two elementary school-age girls — and a nearly insatiable appetite for good beer and taproom vibes — it’s no surprise that our kids know their way around a brewery. But, having been on both sides of the kid divide, we certainly understand and appreciate why the babies-in-bars debate is a controversial one.

The first time we stumbled upon “baby night” over a baker’s dozen years ago at the Thirsty Monk in Asheville, North Carolina, we were so… very… amused. Such a hippie chick thing to do; sitting on a colorful mat on the bar floor in some modified yoga pose, drinking beer and breastfeeding. Only in Asheville! Or so we thought at the time. But the kids-in-bars phenomenon has become more common than not.

Whether a brewery or taproom can be classified as “family friendly” is not a dichotomy but rather a continuum. On the end next to “no one under 21 allowed” is the we’ll-pretend-to-tolerate-your-kids-but-will-repeatedly-ask-if-you’re-ready-for-the-check establishment. In the middle of the spectrum, you get beer coupled with a few board games in the corner, changing tables in the bathroom (hint: preferable to the pub table for hygiene purposes!) and an event or two a month that targets families (think Disney movies or pumpkin painting). Lastly, we have the beer-is-a-family-affair joints that consider families and kids an integral part of their business strategy. These feature amenities such as designated play areas, sandboxes, kids’ food and drink options, etc. In our extensive brewery travels, we have found this last set to be quite common pretty much everywhere we go.

In the spirit of point/counterpoint, let’s consider some of the prevailing philosophies that might drive a craft beer destination to adopt a pro- or anti- kid stance.

Forty-three percent of Louisville has kids under the age of 18 (areavibes.com). Many of those people like to leave the house every once in a while. Some of those times, they’d prefer not to have to find a babysitter. And all of those times they deserve a stiff drink (we feel comfortable saying that because we doubt the teetotalers are reading this column).

It is common knowledge that children drive buying decisions. When deciding whether we want to go to a more traditional restaurant (with good beer, of course) or a brewery/taproom that has a few games and space for the kids to practice flossing, the choice is a no-brainer. And, the fact that our kids have their favorite taprooms influences our choice of where to visit when thirst strikes.

2) That’s the way god intended it.

Of course, by “god” we mean the beer gods — those Reinheitsgebot commandment-making Germans. Traditional German beer halls were always full of families. Even in America, kids weren’t prohibited in bars until after Prohibition. Prior to that, pubs and beer gardens were popular places for people of all ages to gather for food, news and community-building.

Falling somewhere in the third quartile on the pro-kid side of the spectrum are Falls City Brewing Co. (Santa will be in the taproom Dec. 8 and 15 from 4 to 7 p.m.!) and Gravely Brewing Co. (“Parents+Pints” events happen monthly). Holsopple Brewing had a bouncy house at its Oktoberfest event (‘nough said). Logan Street Market has a play corner for kids, but be forewarned that it’s geared toward very little kids/toddlers. Do/Love/Live Brewing also expects to be a pro-family establishment. “Everyone in the founding group either has, or is adjacent to, piles of kids,” said Larry Horwitz, head brewer.

The Holy Grale and Louisville Beer Store now allow children, as long as you keep a leash on them. No, not really. Here is what Jessica Fey, the marketing director for both establishments, told LEO after this piece was published: “We allow infants now that policies have changed regarding our liquor license. We don’t necessarily say we are kid-friendly since both of our places are small and aren’t very entertaining for kiddos. If parents are attentive and kids are well-behaved, we’re cool with them being inside our establishments.”

We allow infants now that policies have changed regarding our liquor license. We don’t necessarily say we are kid-friendly since both of our places are small and aren’t very entertaining for kiddos. If parents are attentive and kids are well-behaved, we’re cool with them being inside our establishments.

Some adults go to alcohol establishments specifically to get away from what they view as “vertically challenged terrorists” (our favorite quote from the March 2018 Forbes article “Parents, Don’t Let Your Babies Grow Up in Breweries (Or Bars)”). I mean, how would your tykes feel if I climbed into your sandbox or bouncy house and ruined your fun?

Kid-proofing a craft beer hangout brings its own challenges in terms of staffing, safety and even legal concerns, said Brian Hampton, owner of Floyd County Brewing Co. Some states require physical barriers to keep the little crumb-snatchers away from alcohol service, and, of course, there are common-sense safety precautions that must be considered (get that kid out of the firepit!). Many parents fail to clean up after their kids as well (see below), which can force establishments to have to staff up to handle the extra mess and monitoring that kids bring.

This is really the crux of it, isn’t it? Responsible parents, drinking responsibly, engaged in a game of “Sorry!” with their Mini-Mes at the community table next to you at the pub aren’t really the problem. The problem is the ones who look at you with shock (or, worse, disdain or indifference) when you brandish your “Star Wars” action figure-infused lager that became so at the hands of their precious angel. (Note: any brewers looking to rip off this inspired idea, you read it here first. Royalties to be negotiated.)

Bartenders aren’t babysitters, and “family-friendly” isn’t secret code for “let your kids run amok.” Even we well-intentioned parents have occasionally erroneously assumed that our kids “knew better” than to run in front of the dartboard or build castles with the shuffleboard sand, only to realize (while skulking from the bar, shame-faced) that maybe we gave them a little too much credit.

Floyd County Brewing Co. allows kids in the medieval-themed restaurant, but not in its (quite cool) Grain Haus or Biergarten. Sorry kids, that giant “Connect Four” game is just for the grownups!

So, what is the answer?

Perhaps a little compromise and common sense. For example, kids go best with day drinking — leave the later evening hours for those unencumbered by knee-highs. And, don’t let your kids interfere with other patrons (or accept it when they give your kid a bunch of sugar and a generous taste of their bourbon barrel-aged stout in return). Just kidding — beer nerds don’t share bourbon barrel stouts. •