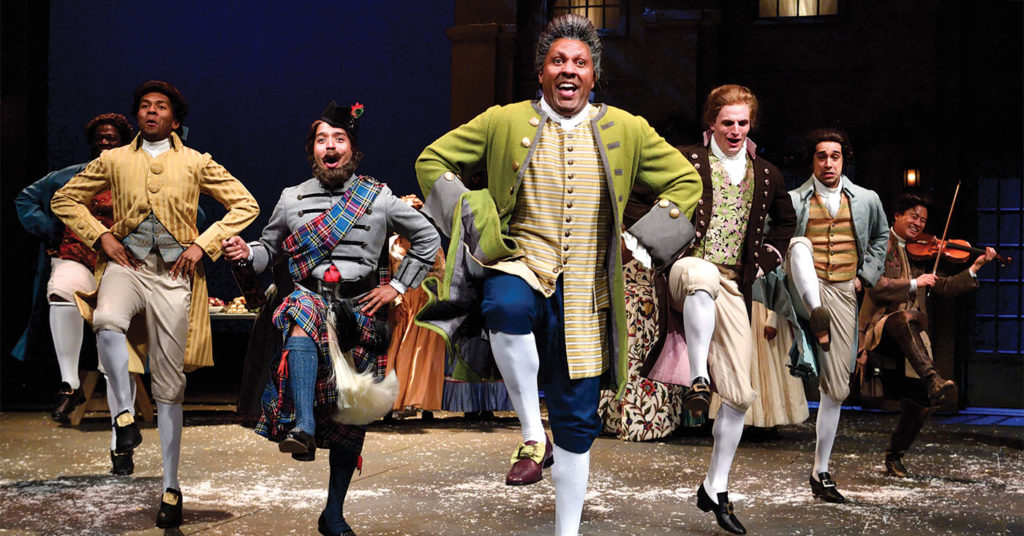 The cast of Fifth Third Bank's "A Christmas Carol," 2019. | Photo by Jonathan Roberts.

“A Christmas Carol” at Actors Theatre of Louisville and sponsored by Fifth Third Bank doesn’t change much from year to year. It’s a staple when it comes to Christmas in Louisville, far and away the best-known and best-loved holiday production in town. Certainly, changes have been made over the 40-plus years — adding cirque influences to the depiction of the Ghost of Christmas Past (Lindsey Noel Whiting), changing Scrooge’s childhood heroes and, of course, changing the role of Scrooge himself (now John G. Preston). But “Christmas Carol” traditionalists will find the same classic show at Actors Theatre, year after year.

When it comes to nuance, I looked at the little details of the show. For instance, a coin that Scrooge’s nephew Fred (Peter Hargrave) gives to Bob Cratchit (Johann George). Later, when Blakely and Miss Forrest (Whiting and Kaitlyn Boyer, respectfully) arrive to ask for donations for children in need, Bob — despite his own poverty — gives them the coin. It’s the kind of detail that can be easily overlooked, but it speaks to the heart of the show. The backstory of the paperweight that Scrooge chucks at Fred added depth to an otherwise grumpy moment. The silent interactions between Scrooge and the Ghosts as they watched the scenes around them spoke as loudly as the dialogue at times. In particular, Scrooge’s playful chemistry with the Ghost of Christmas Past shined.

Preston’s version of Scrooge is quickly becoming a favorite. Though he was as hard and cruel in the beginning as he should be, he handled Scrooge’s change of heart over the course of the show so naturally and so gradually that it felt seamless. George’s Cratchit was also a standout performance this year, eager and smiling, a bit awkward and bumbling but ever the same good heart. Ken Robinson seemed almost to hold back as Fezziwig, making him feel somewhat less gregarious than expected (perhaps to shift the focus to the equally charismatic Mrs. Fezziwig, played by Kara Mikula), but his Ghost of Christmas Present was glamorous and larger than life.

The colorful and vast ensemble is also one of the strengths of the show. It’s also in the ensemble where audiences can find something different each year, though there are a few standards to be relied upon. One favorite is the fiddler (Whit K. Lee), who seems almost some fey or otherworldly entity. He plays and skips through scene to scene, weaving through time, from parties in Scrooge’s past to street corners in his present day. He doesn’t speak throughout the show, but he commands attention, sometimes playing so furiously that his bow shreds.

But whether it’s the fiddler or the Cratchit children (including Stella Russell’s debut as Tiny Tim) the best scenes in “A Christmas Carol” are always those in which the stage is bustling with activity. This is a show about developing empathy for fellow man, after all and it works best when the stage is full. •

Had Truman Capote never written “In Cold Blood,” the true-crime book that catapulted him to a level of celebrity seldom achieved by American writers, his literary reputation would rest on a radically different body of work. Long before “In Cold Blood,” his supple storytelling, beautifully crafted prose and willingness to challenge moral and behavioral conventions in books such as “Other Voices, Other Rooms,” “The Grass Harp” and “Breakfast at Tiffany’s,” had earned him either the admiration or the envy of pretty much every serious literary figure in the country.

“In Cold Blood” changed Capote’s life and his artistic trajectory and not for the better, alas. But those earlier works are marvels.

And among them are a couple of holiday-themed stories, “The Thanksgiving Visitor” and “A Christmas Memory.”

Both stories have been beautifully and simply adapted for the stage and directed by Russell Vandenbroucke in a Bunbury Theatre production that runs through this weekend. This is storytelling of a high order. The stories overflow with a fine balance of irreverent wit and moral purpose. And this is a perfect example of Bunbury’s ability to tell such stories with understated conviction and a complete absence of sentimentality.

In each story, a grown-up Capote (Conrad Newman) narrates and comments on the action while his younger self, nicknamed Buddy, (Bailey Story) and his cousin and friend Miss Sook (Laurene Scalf) live out their various dramas and learn life lessons while evading the voices of authority. Wonderful performances in multiple roles are given by Zach Stone, Kristy Calman, Gracie Taylor and Clay Chapman. And onstage pianist Tom Morton creates a fine atmosphere.

Of the plot, I will say nothing. But the species of humor that pervades these stories — humor that teaches and enlightens without claiming victims — seems vanishingly rare these days. And this play in this season is a wonderful opportunity to rediscover a kind of comedy that heals rather than hurts. —Marty Rosen •

Sometime this week, The Bard’s Town Theatre’s perennial Christmas offering “The Kings of Christmas” will celebrate its 100th performance. That’s a remarkable milestone but not surprising. What the heck — it’s a mashup of Charles Dickens’ “A Christmas Carol” and Akira Kurosawa’s “Rashomon,” featuring the mystery of a dead cat named Marley, a dead magician whose ghost channels Elvis, a living magician with a urination problem and a glorious assortment of characters. This year’s cast includes folks who’ve played their roles before, plus new folks. Doug Schutte (who also wrote and directed the play) returns as Uncle Frank King (and his brother Stein… as in Frank and Stein). Corey Music returns as Carter, the bitter and estranged, long-suffering prodigal son fated to meet the ghosts of Christmas past, present and future. Tony Smith, whose rat-a-tat-tat comedic charisma is one of the delights of the Louisville theater scene, is back as Clinton. Meghan Logue’s gamine charm is perfect for the role of Wendy, Carter’s plucky, never-say-die suitor. And the two newcomers, Abby Braune (as the both mom and crazy aunt) and Ben Silliman (as the infamously incontinent Kennedy King) fit perfectly well into this strange family.