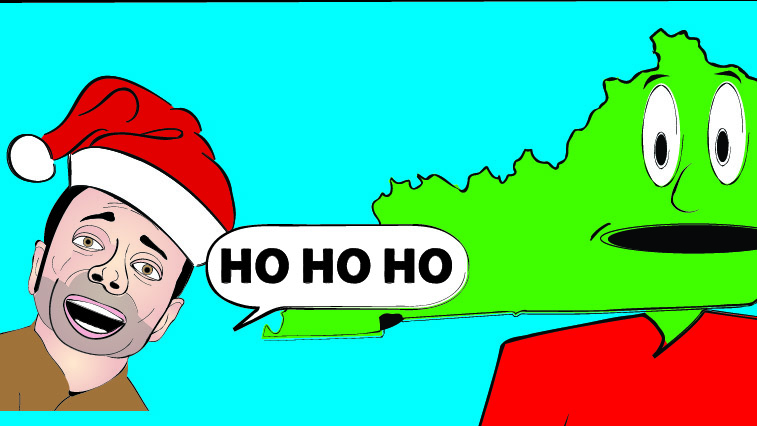 These are desperate times, Santa, and we need to talk.

To date, the best point of advice I have given you was during the Bush administration when I warned you to be careful while flying over the White House. I was afraid that Dick Cheney would confuse Rudolph’s red nose for a stray clay pigeon or constituent calling Cheney out on his bullshit and have your sleigh shot down. Apparently you heeded my warning back then because here we are, and I thank you.

This is not to say that the Cheato-in-Chief wouldn’t notice your flight over the White House, but whatever medications Walter Reed filled him full of in the last few weeks further reduced his coherency, as evident in his NATO appearance and attack on a little girl who is Person of the Year. If he did manage to coherently describe your flyover, Cheato would be more likely to call Fox News, rather than NORAD, so Fox could pencil him into their Santa Tracker segment on the 24th. Fox would subsequently win a Peabody Award because it would be the least amount of lies Cheato had ever told to the media since he declared he was running for office.

In lieu of cookies and milk that will be left in abundance for your arrival in other homes, I am going to leave a pint of Kentucky Tavern, a two-liter of Ski, a pound of Four Pegs barbecue and a jumbo bag of prunes out for you on the evening of Dec. 23. The KT, Ski and barbecue are for your enjoyment after delivering presents since all bourbon is good bourbon if you drink enough of it, and all barbecue is just barbecue unless Kahlil is in charge of it.

The prunes, however, are for you to consume on the morning of Xmas Eve so you’ll have a gift to leave down Matt Bevin’s chimney later that evening for being such a sore loser who pardoned the Scum of Kentucky as a pay-for-play scam [Ed. note: He denies this].

If you have anything left after stopping by Bevin’s house, I would ask that you stop by Officer and Karen McDouche’s house in hopes their Roomba would catch your gift to them and drag it around the carpet out of spite.

I would like to make the following requests of you for the greater good of Louisville, the Commonwealth and the rest of the Earth:

Bring Peace to Louisville and anywhere in this world where people find themselves oppressed and their lives filled with violence and hopelessness.

Any additional peace you can provide all of the families that Bevin smote on his way out is requested as well, including the friends and family of Jeremy Pryor. According to The Courier Journal, Bevin said that Pryor’s memory was not best served by keeping his murderer in jail, but that statement smells like sulfur and bullshit, really. Pryor’s murderer was wearing a Joker smile in his mug shot two years after the murder, and the only memory that Der Failüre will keep of him will be of his greasy palms filled with dollar bills.

A better description of the impact of Bevin’s actions is from Josh Hines, Pryor’s best friend. He told me: “When I heard about the pardon, it was one of the few times in my life I’ve ever been so angry that I cried. … The guy killed my best friend and barely served over three years. It’s absolute insanity and reeks of corruption.”

Thanks are in order for two presents that have already arrived, btw: Gov. Beshear the Younger kept his promise to reinstate voting rights for nonviolent felons and dismissed the members of Bevin’s state Board of Education. Thank you.

For the rest of you, I wish for increased charity for the homeless, because shelter costs money in this land of Haves and Have Nots. Your charity can buy a drink for someone to nurse in a restaurant so they may warm up; or, Almighty forbid, throw them a five to buy the dignity of a warm meal this holiday season. If you participate, make your act selfless, and do not blast that shit on social media, as true charity is faceless and not self-serving.

A Revelation of Truth to every Mediocre Bob to realize that Hannah L. Drake is not and cannot be racist by the very definition of the word, let alone in reality. There are some seriously unwoke folks out there in LEO’s comments section, so let me say this to anyone who would be more likely to listen to me than to her because my melanin content is closer to theirs than hers — step aside on the sidewalk, shut your mouths and take a deep drink of that lemonade she’s serving because some of y’all don’t deserve the honor to read her righteous Truths in print.

If you have time, please inform Charles Booker’s campaign that The Political Affairs Desk is firmly behind his candidacy for Senate. The Desk is aware that (to date) he has not filed in any official capacity, but The Desk will treat him as if he has filed until informed otherwise.

Also, dear Santa, I was hoping you could bring me a chunk of coal the size of a grocery sack when you swing by to pick up the KT since I have one very specific person on my gift list to re-gift it to. I am also sad that I have to ask you for a chunk of coal because there aren’t any coal miners left in Kentucky to ask, no matter what lies the Cheato-in-Chief states as truth.

Finally, if anyone feels it necessary to participate in the consumerist portion of the holiday season on my behalf (and all of these items are on my actual Xmas list, out of character, so that no one can use the excuse “I didn’t know what to get you!” on Xmas morning), I would enjoy gift cards for the Lego store for the sum of one large cup of Pick A Brick, including tax; a few packs of Polaroid 600 film from Target, color or black and white; a bottle of Kentucky Tavern and a two-liter of Ski for my own consumption since I will have given you mine; a new 32K RAM memory upgrade for my Mattel Aquarius computer (they’re on eBay); and a Superb Owl win for the Buffalo Bills OR a secondhand Kaepernick jersey, men’s size large, whichever is easier for you to make happen.

Please travel safely and thank you in advance. — Huntress •

Huntress Thompson is a poet and philosopher living in Louisville. She would like to make a related shout out to the great sage and philosopher Doug Manuel (plus the Spalding University Skool of Writing), as Manuel stated that he’s “proud of Kentucky for starting to acting right” in the wake of the Bevin the Dick Tater’s loss.