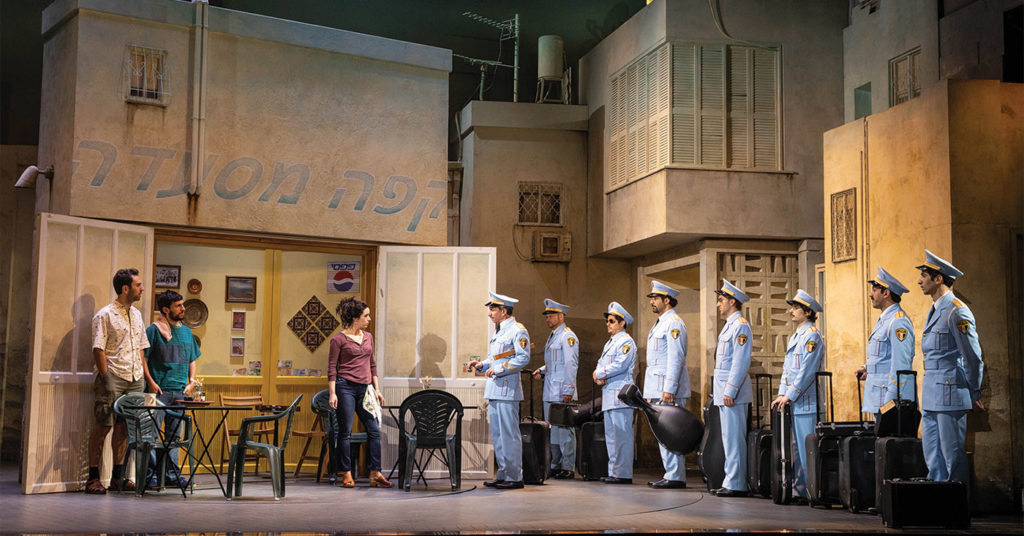 From the beginning of the show and again at the end, we’re told of a band of musicians that visited Israel from Egypt but that: “You probably didn’t hear about it. It wasn’t very important.” It’s an odd way to preface a 90-minute musical, but, from the get-go, “The Band’s Visit” shows that “not very important” is different from “not interesting.”

“The Band’s Visit,” which completed its run Dec. 8, is about as slice of life as it gets. The Alexandria Ceremonial Police Orchestra arrives at the small town of Bet Hatikva, a mishap due to language barriers at the bus station; the band’s intended destination was the city of Petah Tikvah. And, through the eyes of the band, we meet the locals and see their hangouts. We eat dinner with them, see the cracks in their dysfunctional family lives. We learn about their anxieties on dates and see them overcome them. This isn’t a story about special people who changed the world, and that’s the beauty of it.

Instead, there’s cafe owner Dina (Chilina Kennedy), kind and charming and a little bit messy. She wanted to be a dancer and move to the city once, but life and a horrible marriage tied her to Bet Hatikva. There’s Itzik (Pomme Koch), an unemployed father; his wife, Iris (Kendal Hartse), overworked and resentful; and Papi (Adam Gabay), clumsy and awkward… especially when it comes to his crushes. But these characters expand far beyond these brief descriptions. In the slow, intimate pace of the musical, we have the chance to really get to know them: their dreams and longings, their fears, their joys and their grief. By the end of one night, they feel like people we’ve known for years.

The band, too, serves as more than simply a lens through which the audience sees the people of Bet Hatikva. There’s Tewfiq (played by Sasson Gabay, the same actor who originated the role in the 2007 movie), who probably is the hero of the piece: a harsh and socially awkward man, feeling the pressure from the embassy for the band to do well and haunted by his past. He’s offset by Haled (Joe Joseph), a young, carefree musician who often sparks Tewfiq’s ire with his careless ways. As we learn more about Tewfiq, we see the parallels between Haled and Tewfiq’s late son, and we see Tewfiq soften toward him for that reason. We also got to know Simon (played by original Broadway cast member James Rana), the concerto he’s working on and his dreams of one day conducting.

The traditional Middle Eastern music enriches the setting and the story, making it feel that much more real. There’s even a post-curtain call number in which the band performs the concert they had been trying to reach in the first place. True to the style of music, the lyrics, too, are evocative and poetic. Lyrics like “my ears are thirsty for your voice” in the powerful penultimate “Answer Me” or “honey in your ears, spice in your mouth” in Dina’s popular solo, “Omar Sharif” awake the senses with something unexpected. “Something Different,” as another song goes. At other times, the songs carry a sharp wit as in “Welcome to Nowhere,” where Dina, Itzik and Papi inform the band of their mistake — they’re not in Petah Tikva, but in the much sleepier Bet Hativka.

“See, apartments!” Dina declares in the voice of a travel guide, gesturing widely. “Gaze upon my cafe! While you’re here, make sure to walk back and forth between the cafe and my apartments.” This kind of natural humor is laced throughout the show, weaving in between deep moments and confessions.

Although it’s set in a far off land compared to a theater in Louisville, it felt universal and relatable.

The final touch was Scott Pask’s scenic design. Like the simplistic, intimate vibe of the show, the tan and blue sets were not elaborate, aside from a turning centerpiece that allowed us to see different spaces — a skating rink, a small apartment, a cafe and a down-to-earth restaurant. The rest of the set remained the same, and as the centerpiece turned between scenes, it felt like a montage of what was going on in the town. I found myself trying to guess where it would settle, which made me enjoy the slower nature of the scene transitions.

For a fairly short story, there was a spectrum of characters and emotions to be found here, a rich taste to be found in this show that serves as a masterpiece for making something compelling out of something “not very important.”

“The Band’s Visit” is a musical that bridges the gap for those who enjoy plays but struggle with musicals. Like a play, it’s subtle, character-heavy and allows the most profound moments to sink in without embellishments. The musical numbers feel like a natural extension — after all, the story is about a band. It’s contained in one act, taking place over the course of one night, yet the effect of the story lingers for days. •