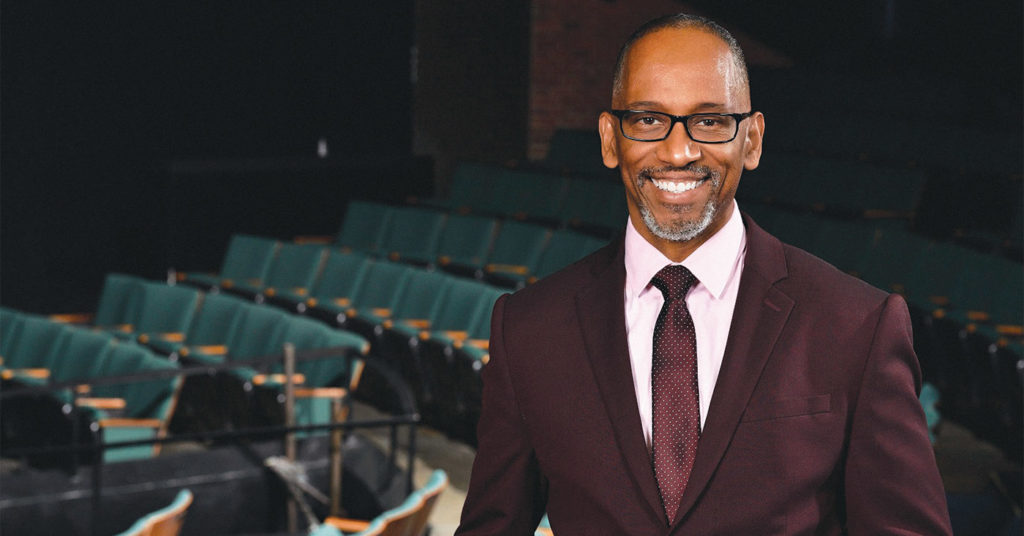 Robert Barry Fleming came home to Kentucky six months ago to become the artistic director of Actors Theatre of Louisville, replacing Les Waters, who did the job from 2012 to 2018.

Homecomings in the world of professional theater seem to be rare, at least here in the heartland. Fleming, 55, who grew up in Frankfort and got his first taste of theater at age 6 in a production of “A Raisin In the Sun” at Kentucky State University, had been away for decades. His career has included stints in national touring productions of Broadway musicals, appearances in indie films (and major projects such as “L.A. Confidential”) and then a career that didn’t so much follow a trajectory as defy the notion that trajectories even matter.

Theater is a risky business in which professionals hedge by specializing early and creating a personal brand that makes it easy for agents and casting directors to understand where they fit in the grand scheme of things.

At one time or another, he’s been pretty much everything one can be in the theater: actor, dancer, director, writer, choreographer and producer. Across his career, the only consistent factor is a refusal to be bound by the traditional divides of style, medium and genre, between, say, the unsettling zones of the avant-garde and the comfortable pleasures of musical comedy. For Fleming, it seems, theater feeds on theater and what he calls “false binaries” just interfere with his artistic path.

Agents, he said, have warned him that he’s a complicated package, difficult to explain. But for Fleming, those “complications” are his reality. “I am a text-based, movement-based, music-based, intellectual artist,” he said in a recent interview. “And these juxtapositions live in my work.” For another artist, an early stint acting, singing and dancing in the national tour of Andrew Lloyd Webber’s musical “Cats” would have been a natural stepping stone to a secure career in musicals.

“What I was interested in was learning about authentic cat and animal movement. That fascinated me,” he said. And he followed up on that fascination by going deep into dramaturgical studies, delving into movement in its many dimensions (including classical theater) and investigating ways to use movement in other contexts. So, yes, he has credits as a choreographer, but this is an artist who won’t be defined by any of his credits.

“I’ve become kind of a polyglot,” said Fleming. “And my investigation and inquiry process is multidimensional, so how I approach a work depends on the nature of the work and what will release the work — whether it’s a physical or cognitive, realistic or spiritual, musical or visual.”

If Fleming’s approach to the means of theatrical communication seems unusually varied, the same might not be said of his sense of mission. He conveys a clear and urgent sense of what theater is for, why it’s important and why he feels a strong drive to make theater in Kentucky and the distinctive role of Actors Theatre in the context of the American life.

It’s a risky business to make predictions based on small amounts of information, but it’s clear that the lineup for next year’s 44th Humana Festival of New American Plays has an unusual regional weight, with a notable focus on the southeastern quadrant of the U.S. – a contrast from the cosmopolitan tendency of recent Festivals.

When I asked about that, Fleming said, “As someone who is from this state and has spent meaningful time in Los Angeles, San Diego and New York, I think the narrative is that those are the centers of human experience, the most nuanced and sophisticated ecosystems in which to start a narrative.”

But, said Fleming, the history and legacy of the Humana Festival of New American Plays suggest otherwise.

Speaking of the Festival, Fleming noted that early in the Festival’s history, founder Jon Jory produced works such as Beth Henley’s “Crimes of the Heart,” which is set in Mississippi and premiered plays like “Getting Out,” by Louisville-based journalist Marsha Norman. “Jon had an iterative process,” said Fleming. “And not everything worked … But what he did most wisely was say, ‘My value is not defined by what New York thinks about what I do and how I want to tell stories.”

Fleming continued, “I don’t want to diminish the importance of any part of the country, but I think if America is finding out anything about itself, it is that the middle of the country has a lot to say about where we’re going and where we’ve been. Subordinating that narrative is done at our own peril. We cannot afford to ignore voices that one might think of as marginalized or not at the center of a conversation.

“We’re at a moment when the center of the country needs to be listened to, and we want our work to be reflective of the country, which is not exclusively either coast.”

For Fleming, plays such as D. L. Coburn’s “The Gin Game,” which premiered during the first Festival and “Crimes of the Heart,” are stories about marginalization that offer important reflections on the human experience and are rooted in regionality.

“What we have to offer here,” said Fleming, “is not in any way subordinate to any other part of the country and has much to offer to the national conversation.”

And looking ahead, he said, “The other part, is that we really want this mission to be part of both Humana and our regular season.” He spoke of programming works that express an “extravagant welcome” that initiates conversations and discussions that reflect the complexities of the world we’re living in.

For Fleming, the regular season and Humana Festival are each driven by a common sense of mission. “Programming,” he said, is based in mission. And working the mission is what ensures Actors remains vital, serving not only local stakeholders but also national and international stakeholders. “There will be new work during our main season, too,” he said. “We’re not going to be able to use that binary where all the new work happens during Humana.”

That does raise an obvious question: What’s the difference between the Humana Festival and the regular season? “I think that will become more legible as we go along,” said Fleming.

For instance, he said, there might be “commercially enhanced projects” that wouldn’t fit into the Humana Festival but could be presented as world premieres that can be shepherded into the national conversation.

Regardless, he said, the goals are clear: “Our mission is about unlocking human potential, building community and engaging a theater that actually examines the human condition and the complexity of that, and this builds directly in line with the idea of building a more inclusive season. Our goal is to create a narrative that everyone can see themselves in.” •