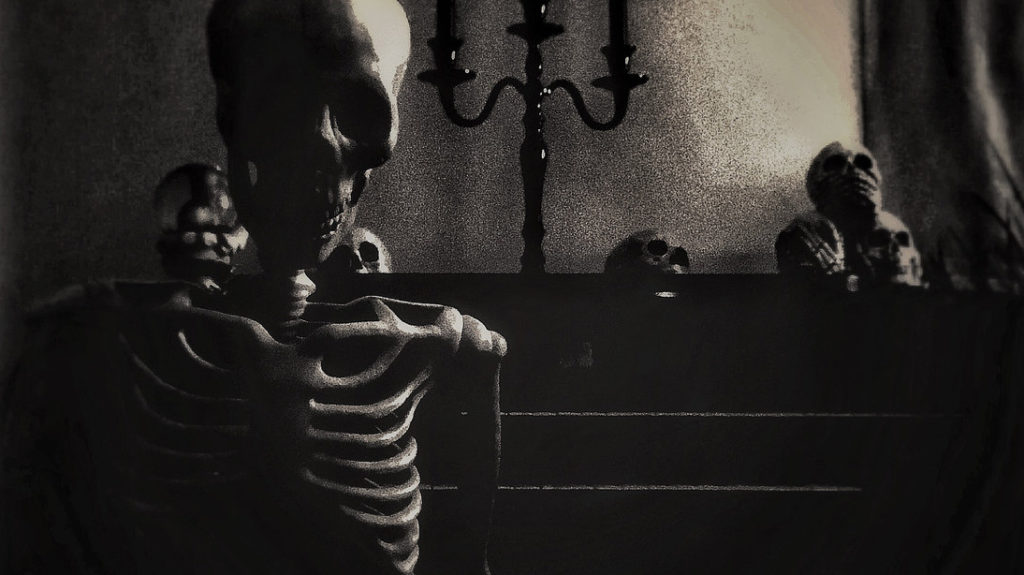 A detail of the album art from Scary Black's 'Are You Afraid Of The Dark?'

The Jesse Lees — ‘Saturday’
Any opportunity to hear the dulcet voice of Otis Junior is a welcome one. The music of The Jesse Lees is sultry and sweet, a glorious R&B and neo-soul ensemble with an enviable amount of talent. Every instrument here, from Otis’ voice to the tonal density of the bass, is a treasure to your ears. The guitars are as sweeping as the rest of the arrangement, serving as a lead instrument, but never diminishing the keys or the string arrangements. Through discussions of changes and growth, Otis ends with the plea, “I feel I earned the right to play, like Saturday,” reclaiming his peace of mind and metaphorically biding his audience to do the same. Take a moment of rest on whatever your Saturday is, because you’ve earned it.

Glob — ‘Crushed’
It’s virtually impossible to not hear a little “War Pigs” nod at the top of “Crushed,” the newest by Glob. That sets the stage for a fuzzed-out, guitar barn burner. The animalistic rage reflects the general je ne sais quoi of the track, which features an apparently unrequited love, or love lost. It’s that anger you feel when you want to love and be loved but feel in some way inadequate or let down, confused by your emotional response. When the singer screams, “and i’m getting pretty tired of waking up, fetishizing loneliness, an exercise in uselessness, I feel so fucking dumb… I’m crushed,” it’s not easy to feel that in your soul. Glob captures that confusion, doubt and loneliness in this blistering track.

Mike Seymour — ‘()’
There is unrelenting darkness in “(),” the second untitled track on 1.5, the newest EP from ambient composer Mike Seymour. The sonic bed here is deep and foreboding, the sound of bowed metal resonating in the deepest black. The wind rushes against the stone walls of an endless void. A bleakness reflects a winter with gray, gloomy clouds and short days. As such, this is a heavy track, visceral and seething, a coiled restraint that feels only loosely contained. You imagine some kind of Lovecraftian horror hiding from the light, just waiting to unfurl its leathery wings and take an eldritch flight.

Auxfinesse — ’12’
Auxfinesse crafts a compelling strain of electronica, polyrhythmic compositions that feature an array of mixed sounds and notations that play off of one another. This is the kind of robotic stomp that you imagine a team of industrious robots embrace, dancing a sinister groove. There is a grid-like layout to the track, where the beats are locked into a rigid system, complex and intermodal. It’s that complexity that compels the dynamism of the track, which features a warbling synth drone in the background, serving as the backdrop to a trap-heavy beat and harmony-rich bass progression. The sound of metal-on-metal percussion only enhances the inhuman qualities of the music, which commands the motion that it creates.

Scary Black — ‘There Is Nothing Here For You’
The heavy plod of industrial drum machines and synth bass informs the gothic growl of Scary Black, which recalls the best of Bauhaus or Sisters of Mercy. This is stylized, pitch-black, an intentional look into the darkness around you. Backed by the baroque drawl of singer/guitarist Albie Mason, “There is Nothing Here For You” is a push and pull between desire and reality, between following your heart but wanting what’s best for everyone involved. The guitar work here is lush and reverb soaked, an homage to dark wave and shoegaze all the same. The imagery is foreboding and coldly distant, emotionally isolated and alone. Scary Black embraces the melancholy and confusion, and it wants the same from you.

Tiny. — ‘Womp’
A few years back, producer TinyForest fell off the map. His bandcamp disappeared, and his music was largely gone. Returning with “Womp,” he picks up where he left up, with lo-fi, trap-influenced beats that feels indebted to J Dilla. As it features an Alice In Chains sample from the track “Would,” you might expect more than a little grunge spirit here, but that feel is rendered sublime by dreamy guitar and synth work, which flesh out a loose and choppy beat. In a lot of ways, this is the idea of punk and alternative recontextualized for a new generation, pulling the best of each into something freshly whole and somehow free of the nostalgic fuzz that might otherwise inform tracks with prominent sample sources.