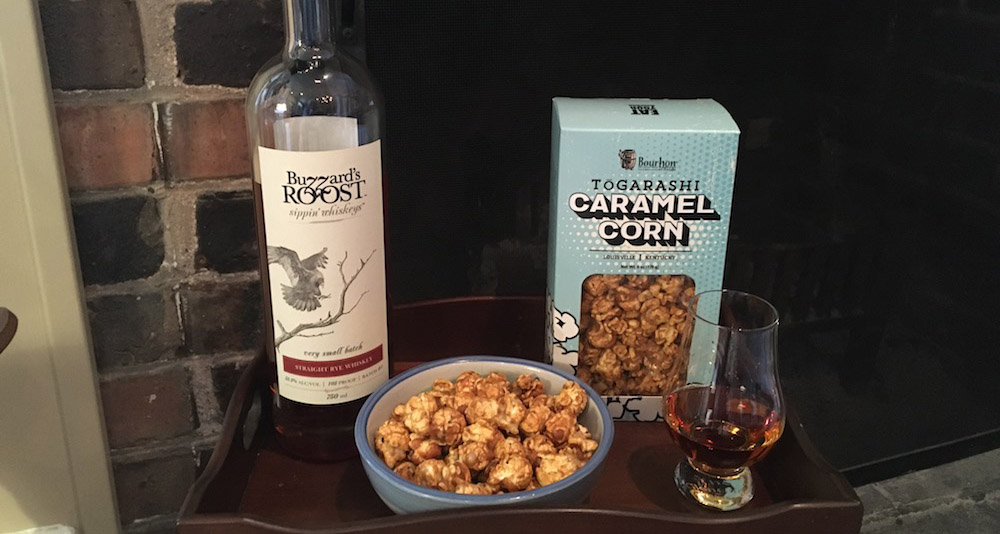 Staple of movie theaters, fairgrounds, baseball games and probably your TV room, popcorn is the all-American snack staple. There’s an excellent historic reason for that.

While various grades of Zea mays are grown as edible sweet corn or as field corn that becomes animal feed and can be distilled into ethanol or bourbon. The oldest cultivated corn, which was grown by indigenous pre-Columbian Americans beginning more than 7,000 years ago, is Zea everta — popcorn.

Of course, the characteristic, hard outer shell of popcorn kernels makes it practically impossible to eat. But, heat them so that the moisture inside changes to steam, and it pops open, everting (hence the scientific name) the insides of the kernel into tender, edible popcorn.

As long as I can remember, popcorn has been my favorite snack. When I was in college (and even occasionally today), popcorn is a perfectly acceptable lunch. It was a big treat when I was little. That was way before microwave ovens and microwaveable popcorn sold in bags.

My mother would pour just enough cooking oil (or, even better, bacon drippings) to cover the bottom of a heavy saucepan. Once the oil started to simmer, she added a kernel, and as soon as it popped, she added a layer of popcorn and clamped the lid on the pan. In less than five minutes, with some occasional shaking, the fluffy, popped corn filled the saucepan and was emptied into a big bowl into which butter and salt were added. No butter needed if the bacon drippings had been used, with the added bonus of a faint, bacony flavor. The perfect beverage pairing was a 6-ounce bottle of Coca-Cola poured over ice into a glass.

Popcorn was the first thing I learned to “cook.” By the time I was in middle school, I would make it for Saturday night movies on TV. I might sprinkle seasoning on it. A little dried dill is surprisingly good.

Since just plain popcorn is rather bland, it lends itself to many flavor additions. There are myriad companies specializing in party-sized tins of pre-popped and pre-seasoned popcorn, coated in a variety of ingredients, most commonly cheese and caramel. But I recently discovered a flavored popcorn that leaves all the others far behind in the flavor race. Think of Secretariat’s stunning, 31-length victory in the 1973 Belmont Stakes, and that’s what Bourbon Barrel Foods’ Togarashi Caramel Corn is to the rest of the popped corn pack.

In case you are familiar with it, togarashi (also known as shichimi togarashi) is a blend of seven ground spices — red pepper flakes, black and white sesame seeds, nori (dried seaweed), ginger, dried orange peel and black pepper. It is used in Japanese cuisine most often to flavor meats and seafood and is savory, punctuated by spikes of heat from pepper and ginger. The Bourbon Barrels Foods version tweaks the ingredients a bit by smoking some over its trademark bourbon barrel staves. (Founder Matt Jamie has a knack for supercharging Asian flavors. He started Bourbon Barrel Foods in 2006 with microbrewed soy sauce aged in used bourbon barrels. Try it, and you’ll never go back to the salt-laden, big commercial brands.)

From the inside out, this is superior popcorn, which it should be at $1.33 per ounce. Orville Redenbacher Buttery Microwave Popcorn, in contrast, is about 14 cents an ounce. (But hey, Kentucky spoonfish caviar is $25 to $30 per ounce, so this is an affordable luxury.) Each piece of popcorn is large, round, tender and coated in a just-right layer of caramel in which the spice blend has been added. Every piece offers a kaleidoscope of sweet, hot, slightly bitter, a little smoky, not-too-much-of-anything happiness. The texture is perfect. There’s a little give while biting down on a piece, before your teeth sink into the softness.

Good old buttered and salted popcorn and Coke are a classic pairing. But, what would go with this grown-up togarashi and caramel treat? Obviously, an adult beverage of some kind. (Though, honestly, good old Louisville tap is a perfectly good choice, too.)

Given the name of the food company, bourbon certainly springs to mind. Not bad. But perhaps just a shade too sweet, tipping the balance of the popcorn’s seasoning into the caramel zone. I tried a seasonal Christmas ale from Great Lakes Brewing Co. in Cleveland, since it was brewed with some of the same spices, including ginger. Better. But not quite right.

The third pairing turned out to be It. Rye whiskey and togarashi caramel popcorn.

Bourbon Barrel Foods’ flagship store is on Frankfort Avenue, and the rye to sip with it has a Frankfort Avenue connection, too. Bourbons Bistro co-owner Jason Brauner also has a stake in a new whiskey company. Buzzard’s Roost Very Small Batch Straight Rye was just released this year. Brauner selected barrels sourced from MGP in Indiana whose flavor profiles he liked. The whiskey was then put in secondary barrels with custom-carved, wavy staves for increased surface area. These were then aged in Kentucky for several additional months until Brauner judged them to be ready.

Rye tends to be spicier than bourbon, but when it has some corn in the mashbill, as this one does, there’s still some fruity sweetness. Buzzard’s Roost has all that, plus a little milk chocolate, cinnamon, vanilla and figs. It’s as complex as the snack.

So, you could leave a dish of the popcorn and a glass of the rye next to the fireplace on Christmas Eve for (Bad) Santa. Or, better yet, sit in front of the fire with the pairing and your favorite winter reading. Do know that Buzzard’s Roost is a hefty 105 proof.

So, add a little water and don’t get too close to the burning logs. •pair