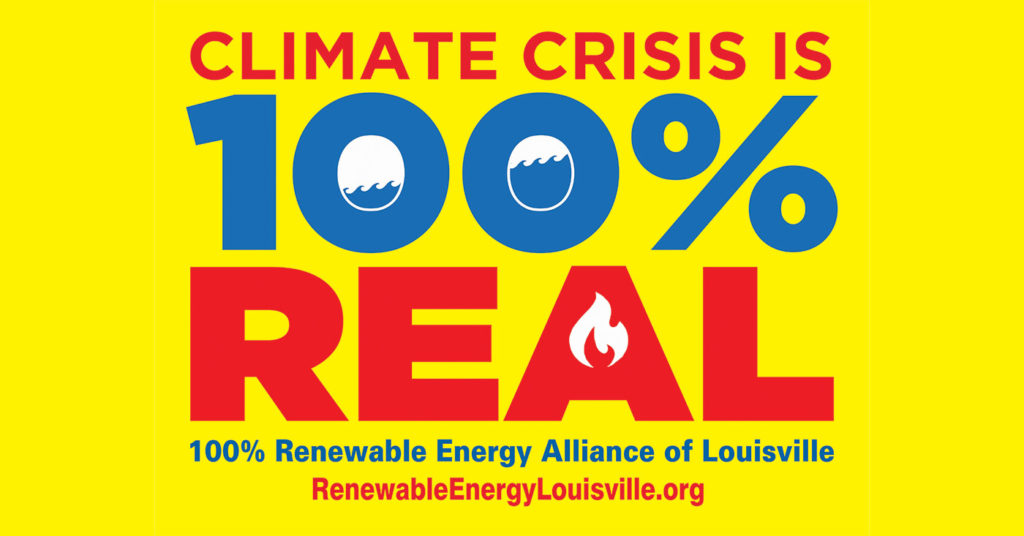 A mockup of a yard sign that 1005 REAL is using to boost support for its resolution before the Metro Council.

The first yard signs have already gone up along Bardstown Road: “Climate crisis is 100% REAL,” they say. REAL stands for the Renewable Energy Alliance of Louisville. The signs will be sold to whoever wants them. 100% REAL has printed 100 so far. Also, three billboards are planned — two on Jefferson and Breckenridge streets, and another at the intersection of Armory Place and Chestnut Street.

It’s all part of the group’s publicity campaign to raise awareness for a nonbinding Metro Council resolution that would transition Louisville to 100% renewable energy over 20 years, starting with Metro government operations by 2035. The community, including LG&E, would have until 2040 to transition to clean energy, such as wind or solar power. In addition, the resolution calls for new building codes that would enforce new rules for energy efficiency.

The resolution lacks a plan for how this would happen, including how much it would cost and who would pay for it, but does highlight possibilities, including installing solar panels on rooftops and importing wind power to Louisville from renewable energy companies.

“We have to eliminate carbon emissions entirely by 30 years, by 2050, and that’s not opinion, that’s not a political party, that’s not what I’m saying. That’s what 91 scientist from 40 countries are saying,” said Sam Avery, a member of 100% REAL who works as a solar installer. “And so that means that the weather is going to get worse over the years, and people are going to notice that, and they’re going to wonder what we were thinking back in 2019.”

The resolution faces challenges including a potentially skeptical council, a mayoral administration with its own environmental goals and private companies that might bridle at being forced to comply.

Avery said he doesn’t think most people are aware of his group, which counts 30 to 35 members, and its cause, which 100% REAL has been pushing since 2018. But, he thinks support will grow as people learn more about the goal.

Gill Holland, a local entrepreneur with a history of supporting environmental causes, donated the money to fund the billboards. He learned about the resolution only last month, and now he’s going to 100% REAL meetings and helping out financially.

“I think that’s a great first step,” Holland said about the resolution. “And I feel like there’s been lots of people doing feel good resolutions. But, I was interested in helping this group be the first group that actually starts laying out tactical and achievable measures to actually achieving the goal as opposed to there’s a lot of talk but not a lot of action.”

Councilman Brandon Coan, D-8, a co-sponsor of the resolution with Councilwoman Nicole George, D-21, said a council committee is not expected to take up the resolution until next month. Coan doesn’t expect the resolution to make it to the full council before February.

And once there, he’s not sure how it will fare.

“Climate is still, and the environment is still, like a political football in the year 2019 in Louisville, Kentucky,” Coan said, adding that when environmental issues come to a vote, they’re not necessarily treated as seriously as they should be.

In 2018, Mayor Greg Fischer announced his own environmental goal for the city: an 80% reduction in greenhouse gas emissions by 2050. In November, his Office of Advanced Planning and Sustainability released a draft of an emissions reduction plan, along with a promise to go further than the original goal, although it did not set a new target. Coan and George’s resolution asks the administration to tailor the final action plan to the 100% renewable energy goal.

For the resolution to work, it would need support from the business community, but David Sinclair, LG&E’s vice president of energy supply and analysis testified against the resolution in committee, WDRB reported.

One of 100% REAL’s plans is to find a way to power the entire city with renewable sources.

But, as Coan pointed out, LG&E has a monopoly on generating electricity in Louisville, so metro government would probably have to lobby the state to change this.

For now, 100% REAL is concentrating on growing public awareness and passing its resolution.

When Avery went to put out his yard sign recently, a person in a car stopped to buy one from him. And then, when he decided to take another sign to a visible spot about a block away from his home, someone else asked to purchase one.

“So the first two people I saw were not only very interested in the issue, but were willing on the spot to make a contribution to display their own commitment to it,” he said.  •

To purchase a sign of your own (available by donation), go to renewablenergylousiville.org