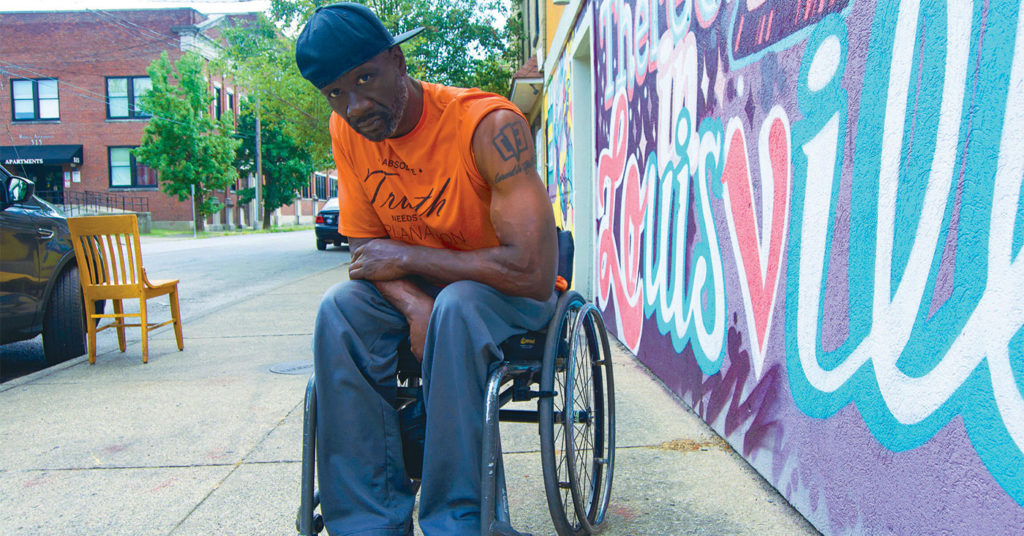 Herb, owner of Kentucky Sol and Competitors Edge in Russell.

“We’re in a good place, man. Personally, I got hit when I was 18 years old, in 1992, a gunshot. I used to play football for Louisville. My journey has always been about well-being, you know, trying to heal the injuries and mental scars. I was just trying to find my way to function in life. My whole thing has been with this physical challenge that I’ve been faced with. That’s with trying to remove myself from it, whether that be getting out of the wheelchair or making it as comfortable for me to maneuver as possible. With that being said, it starts with what I put in my body. I went on a spiritual journey because I wasn’t spiritually grounded.

We grew up on the block, in the neighborhood, like everyone else. We were barbecuing every day, and everyone would come over to the house. We would grill big ribs and chicken all the time. My pops died sick. My moms died sick. My oldest brother died sick, and I got another brother that’s about 500 to 600 pounds. I’ve been conscious, and I watch it. I also look out for my family and friends.

I wanna make it as simple as possible for my people in my community. If possible, I would like a greenhouse attached to a restaurant. We just need the tools to have our own greenhouse and restaurant and give the people other options than just chicken and pills. We got CBD for them — a natural way for the body to heal itself. We’re not healing ourselves with 40 ounces, fried chicken and Xannies. We will never see our superpowers. All of our babies are going to be sick and fat, and whose fault is it? It’s ours because they’re following us. The kids are just doing what they’re seeing us do. So, if I can’t teach and show them how to be better, in my environment, then I’m just the biggest hypocrite as anybody else. You know, that’s just talking about praying about something that I have no intention of changing. The hypocrisy.

They demonize marijuana so badly that it’s frowned upon. Anything associated with the hemp plant is perceived as bad. The misconception is that it’s bad. People aren’t even doing the research on the medicinal health benefits that a cannabinoid system that puts in balance. These things are natural, from nature. The truth is that it’s not very affordable because most people can’t afford it. Insurance companies won’t cover it. … They should make it where the insurance would pay for it. If they did, it would be nice, but I’d like to see everybody get on it because the insurance is pushing dope and pills. That ain’t curing nothing — you won’t feel anything. Ain’t nothing going away.

I’m here. I’m going to do it by example. One day, we’ll be able to make a franchise amongst all the hoods. I wanna have a health and wellness center with a gym and information connected to it. I want us to be a part of it and learn and take care of ourselves. These grocery stores ain’t doing it. Look at the stores they offer us. Kroger’s not doing it. The Kroger down here has the worst produce in the city. We have to go out someplace to get quality produce. We got Family Dollars that give us chips and shit on every corner. What are our babies supposed to eat?

If anybody is coming to look for any kind of well-being, we’re gonna have more information than just the CBD. It’s important for someone to be health-conscious and willing to give back. When we partner with Chef Space, we want a mobile smoothie bar — hemp smoothies. If I can drink my nutrition, it’ll all be better. Plus, smoothies will make you smile, too. I love ‘em.

I grew up on Southwestern Parkway, which is directly across the street from Shawnee Park. I would walk across the street every day. Growing up in The West End, we didn’t have any family from here. My mother uprooted from St. Louis and came here. It was cool. I was the youngest of five boys. With four older brothers, I didn’t have too much trouble in the neighborhood. Everybody knew them and knew me, and they could hold their own. It was just basketball, sports and running the streets. I had both parents in the house, so there was never really any foolishness. I wasn’t into drugs, nor was I selling drugs. I kept my C in school because I didn’t like school, and I knew it was a means to an end. I played ball. I hooped, played football and ran track. I had a good time. I wish I would have played basketball till my senior year. They said that we could’ve won the championship if I would’ve played. I stopped to focus on football because I had a scholarship to go to UofL, and my coach told me to get off the court and hit up the weight room.

Man, I ran through Shawnee Park, Park Hill and Southwick. It was just cool, and we was all tight. I had a ball in my hand, and we went from court to court. By the time you come home, you’re tired. You’d chase a girl or two, clean up and go back to school and do it all over again. That was just my life until I was 18.

When I was 18, it was football. I came back and started as a freshman — I started like five or six games at UofL, as a running back. I came back, and in the 1992 season, I got shot. My running days were over. I had to readjust.

If I didn’t have that foundation — like my parents and brothers, I could’ve gone insane. I’m still holding it together. With the readjustment, the hardest part was my coach seeing me. My offensive coordinator from UofL came to see me while I was in rehab. I was trying to learn how to not only live again but sit up. I couldn’t even sit up on the edge of the bed without falling. I had to learn how to do everything sitting down until I’m running again. I’m not sitting in here, on purpose, like I’m not trying to get out of this motherfucker. You’ll see me moving and dancing around. I’m sick of it, and I deal with it. That’s what it is.

I would be so frustrated if I waited on somebody. I’m married, and she’s not domestic. She’s a CPA, an accountant, so she goes to work and gets her money. We’re growing as people. The frustrations are real because I have frustrations with myself and not being able to do things as fast. I project it on other people and tell them that they should but that expectation shouldn’t come out of my mouth because everything is a blessing. So, if I want something done, I just have to take my time and do it, whether it’d be mopping the floor or doing dishes. I just take my time. Nobody owes me anything. It’s just one thing at a time. I had to readjust my thinking.

The fact that I ain’t got nothing to do keeps me motivated. There’s nothing else to do but get better. If you’re not trying to improve yourself every day, what are you doing? If you ain’t trying to make someone else better, what are you doing? I ain’t gotta wait on nobody to go running or exercising. I’m gonna take off! If somebody wanna get with it, they can get with it but waiting is for the birds, man.

Take care of yourself and don’t expect anybody to love you like you love you. Get with people that love themselves. You know when people are in self-inflicted nonsense, that’s what you call S.I.N. You know when people are stabbing themselves. You just gotta stay out the way and pick healthier friends. Be mindful of who you fool with and be conscious of your choices. Don’t just be bored and wanna be entertained. That’s the problem. We’re programmed and not trained. We’re programmed to TV, and we don’t have a creative thought in our brain. Shut that shit off. Be the creative gods that we are. That’s what it is.” •