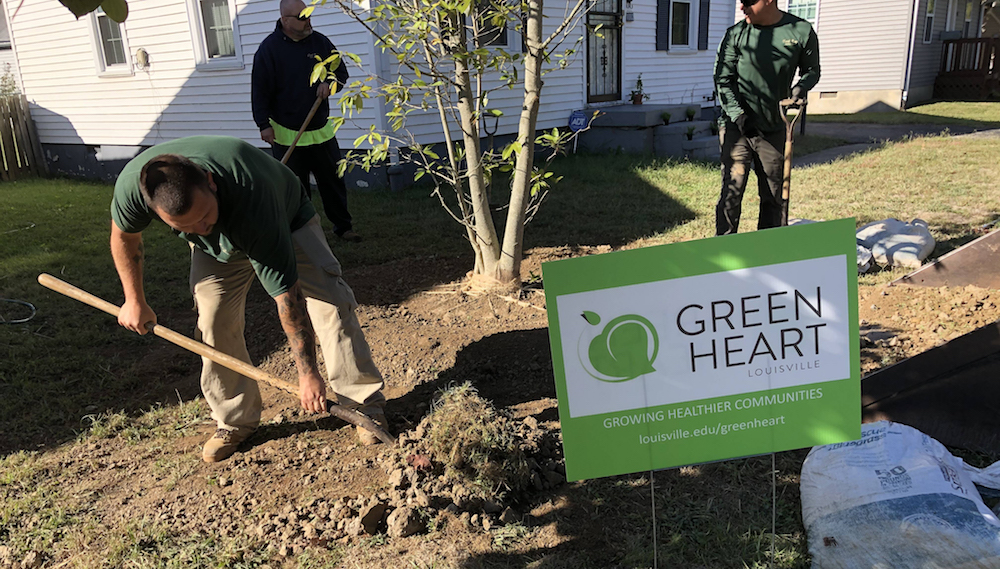 Tree planting during a kickoff event for the Green Heart Louisville project.

If you live in Louisville long enough, one popular jab you might hear is that the air quality is poor. It has gotten better, actually, but it could improve.

Green Heart Louisville, a five-year project through UofL, wants to be a part of the solution, planting about 8,000 trees in South Louisville neighborhoods and studying their effect on residents’ health. Planting began Oct. 5 with the help of nonprofit Louisville Grows, which is canvassing and coordinating the planting of trees and shrubs on private, residential property.

“This is sort of a very unique way of looking at nature and how we relate to nature within our urban environments,” said Dr. Aruni Bhatnagar, director of UofL’s Christina Lee Brown Envirome Institute, which is heading the project. “And by understanding this link, we might be able to provide a way forward, not only for places in Louisville but cities around the world.”

Consider this: According to the State of the Air 2019 report from the American Lung Association, Jefferson County received an “F” for high ozone days from 2015 to 2017. For high particle pollution days, it got a “B.” “Both ozone and particle pollution are dangerous to public health and increase the risk of premature death and other serious health effects like lung cancer, asthma attacks, cardiovascular damage and so forth,” Shannon Baker, advocacy director for the American Lung Association in Kentucky, said.

Trees can remove significant amounts of air pollution, so losing them can harm your health — physical and mental. Between 2004 and 2012, Louisville lost about 54,000 trees per year, according to the city’s 2015 Urban Tree Canopy Assessment. In Louisville, the declining tree canopy also contributed to the formation of an urban heat island, a phenomenon where a city’s core has a hotter temperature than its edges.

Green Heart covers six communities in South Louisville, including Oakdale, Wilder Park, Taylor-Berry, Beechmont, Jacobs and Hazelwood. According to Bhatnagar, these neighborhoods were selected because they are middle income and racially diverse, and also because they are near the Watterson Expressway, which would give Green Heart the opportunity to measure how the residents are impacted by exposure to the freeway.

Through a study that Green Heart is calling Health, Environment and Action in Louisville, or HEAL, it is monitoring the blood pressure, cholesterol, liver function and heavy metal levels — among other vital numbers — of about 730 residents and will collect further data in 2021, after greening the area.

Researchers are also measuring other ways that the addition of trees could affect health, including stress, physical activity, depression, wellbeing and even biodiversity — for which they collected data on butterflies, insects and bats in the area. “There’s a lot of different reasons why greening may affect someone, and we have to understand all those on a certain level to be able to figure out what role air pollution plays or what role physical activity plays,” said Dr. Rachel Keith, leader of the HEAL study.

The Green Heart project grew from a smaller project called Green For Good that occurred from 2015 to 2017, during which time the Envirome Institute investigated how planting trees at St. Margaret Mary Catholic School would impact the health of 60 students and 24 adults. St. Margaret was chosen because it is near a freeway, a source of air pollution at the school. Keith said Green For Good showed improvement in immune cells and other cells that represent vascular and heart health. The final study of Green For Good also found that the particulate pollution was 60% lower behind the biofilter created by the trees.

“That gave us, I think, a good jumping off bar to say, ‘We can create good, validated, vegetative buffers that could change these dynamics of air pollution and we’re seeing health differences,’” Keith said. “So why don’t we look at a larger population and explore that a little bit more in a bigger setting?”

The Green Heart project receives funding from The Nature Conservancy and National Institutes of Health and is also partnered with Hyphae Design Lab and The Institute for Healthy Air, Water and Soil, among many other groups. Despite its many collaborators, Green Heart wants the neighborhood itself to be certain of its important role in the project. “I think the neighborhood in general is also looking for a way to be recognized and do something good for the community,” Keith said.

At a kickoff event Oct. 14, Metro Councilwoman Keisha Dorsey said the project is exciting. “We have innovative minds in this community that are pushing the envelope, that are going beyond the logical and the theoretical,” Dorsey said. “I think we know that if we plant more trees, that there’s a positive impact. But what we see in this community are people pushing the envelope to make that a data-based, political, policy-based decision.”

The event was held on the lawn of residents Kimberly Werner and Tommy Hensley, concluding with the planting of a tree in their front yard. The couple said they’re excited about the project and think the trees are “just gorgeous.”

“I just couldn’t imagine the world without trees,” Hensley said. “It would just be nothing.”

David Phemister, state director for The Nature Conservancy in Kentucky, said looking ahead, he hopes to see strong evidence from the study proving nature-based solutions to be effective and healthy for the community.

“We really hope for a Louisville in the future in the same as what we hope for Kentucky, or the U.S. or the planet — a future where people and nature thrive together,” Phemister said.