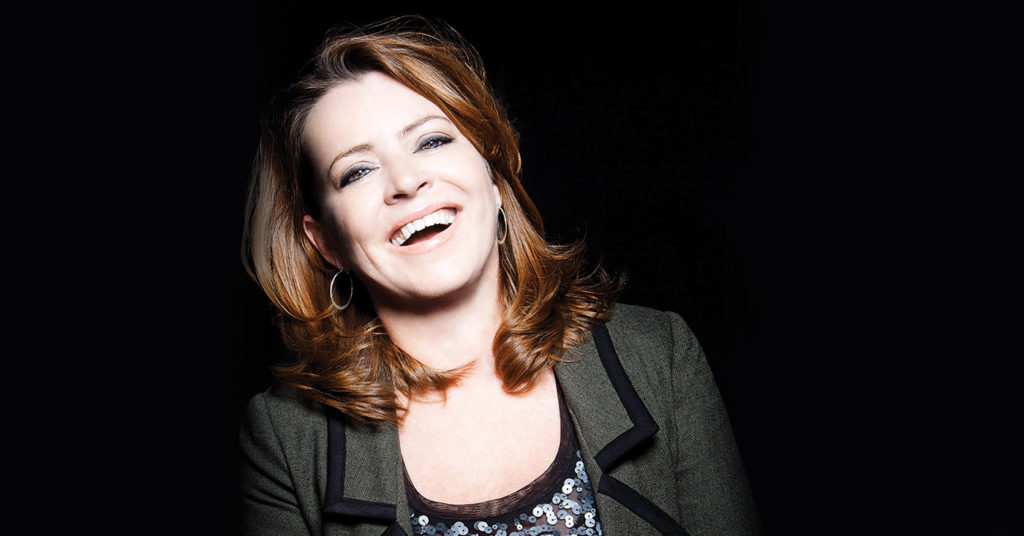 Given the state of the nation, comedian Kathleen Madigan has a suggestion for how to improve things: raise the maximum age for elected officials to 75. “They still hold grudges from the Civil War,” she told LEO. “They’re like, ‘I remember what Mitch McConnell did in the Mexican-American War.’ This week, she’s in town for one night at The Brown Theatre.

LEO: Thanks for making time for us today.
Kathleen Madigan: Yeah, no problem. I’m always happy coming to Louisville. Anywhere in Kentucky, really — minus your roads. Someone needs to go to Mitch McConnell’s house and tell him you need the money back to fix your roads. Beautiful state, not the roads.

We feel that way about Indiana.
Well, that’s true, too. Yeah, Indiana and their freaky signs that say, ‘No stopping, standing or walking on this highway.’ I don’t even get what they’re saying. Who would go on a highway and just stand there? They’re not saying, ‘hitchhiking.’ It’s very strange, I don’t know what they mean.

Tell me about the new special you’re working on. Is it for Netflix?
Yeah, everyone’s is. I think they gave my mother one, I’ll have to check. All of us are trying to put out a special every two years, just to keep things moving in the right direction. It’s the weird history of all of this, where you went from only two channels that showed stand-up [Comedy Central and HBO], and now there are like 7,000 outlets to choose from.

So, what has been on your mind as you write material for the new special?
I always talk about family and traveling and stuff like that. The bigger thing that I’m focused on and upset about is that everyone running the country is in their late 70s or 80s. I’m not even kidding — the three people who ran the Brett Kavanaugh hearing were at least 85 years old each — Dianne Feinstein [86], Chuck Grassley [86] and Orrin Hatch [85]. Then, I do jokes about my grandpa when he was 85, and why I wouldn’t have trusted him to make decisions for the country, either. We really need the old guard to step aside. They still hold grudges from the Civil War. They’re like, ‘I remember what Mitch McConnell did in the Mexican-American War.’ I remember when Reagan was 70, and the whole country freaked out. Everyone was like, ‘Is he going to shit his pants?’ No one could believe a 70-year-old was going to be in charge of things. If 35 is the minimum, 75 has to be maximum. Left, right or center, it has to stop. We don’t need Orrin Hatch at 85 saying he’s going to run again. Did we learn nothing from Strom Thrumond? It seems like, they know they’re not going to live long enough to deal with repercussions of a lot of these decisions, so they don’t care. But we’ll be the ones stuck with fixing the collateral damage. Right? We’re putting Mark Zuckerberg in front of Congress with people who are too fuckin’ old to know what they’re talking about. I’m like, ‘Do you have any grandkids that could come in here and ask him some questions? I feel like they would know more about privacy settings than you do.’ Too many old people in charge of things they know nothing about.

Does the current political climate make your job easier or more difficult?
With Trump, no one can write that fast. He does so much within a day, within a week, within a Tweet, within an hour. Even if you’re a nightly TV host like Fallon or Kimmel, your whole staff can’t keep up. It’s exhausting. I think it’s his motive, he’ll wear you out — and he will.

Have you ever considered writing a memoir about your life on the road?
Oh, my gosh, no! No way. Someone would have to dig through all the bar napkins in my purse to piece it together.

That would be a good title, ‘Bar Napkins In My Purse.’
Yeah, ‘Bar Napkins In My Purse,’ would be a good one. Or ‘Shit I Wish Someone Had Told Me.’ Which is stuff like, I didn’t know until I was 40 years old that there is a little picture on your gas gauge that tells you which side of the car the gas tank is on. It would be very practical things for life like that. Liquor laws for different states, so you’re aware, so you can get ahead of things. Like if you want a bloody mary in this state, you better get it on Saturday because they won’t serve you on Sunday. Honestly, there’s a lot of shit I wish someone had told me. •