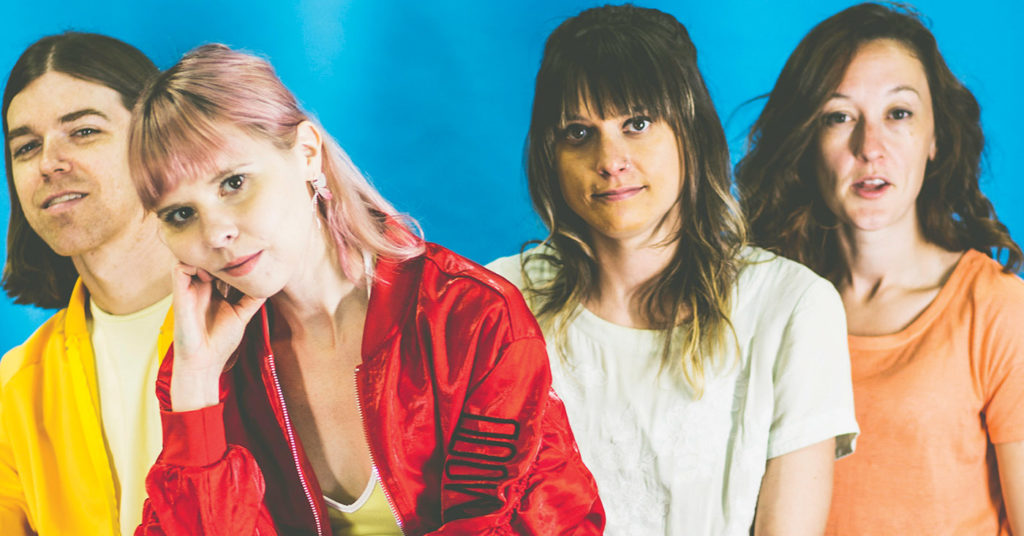 Frederick The Younger debuted four years ago as an indie group reminiscent of the pop-rock sound of the ‘80s, with Aaron Craker’s Dire Straits-like guitar and Jenni Cochran belting lyrics in the tone of Chrissie Hynde. Their debut full-length, 2017’s Human Child, was a heck of a crowd pleaser, an album with bounce and shake. Now, they’re living the dream as full-time musicians, playing with a few new band members and releasing a new EP in January on sonaBLAST! Records. Their new single “Back to the Wall” is out now, and it’s a dance party just waiting to happen.

LEO: Your debut album was released two years ago. Since then, you two are the only original members remaining. Was there a reason for reorganizing?
Jenni Cochran: Aaron and I were actually a two-piece before we became a five-piece. We performed under the name Dr. Vitamin, which was Aaron’s solo project when I first met him. We changed the name to Frederick the Younger in 2015 and a few months later Matt Kohorst [bass], John Barrera [guitar] and Dave Givan [drums] started playing with us. We recorded our first EP and the Human Child record with them. Once we started booking longer tours, it was harder to keep the same lineup because of everyone’s work schedules. In early 2018, I met Shelley Anderson who was mastering some songs for us. That summer she started playing bass in Frederick the Younger, and then a few months later Meg Samples [drums] joined. Juliana Rodriguez [vocals, keys] joined this past summer. It feels effortless. We really connect and work well together.

At the time of the release of Human Child, you voiced how difficult it was to hold down full-time jobs while playing gigs on the off hours. Have you transitioned to full-time musicians?
Yes, thank god. It was very hard to work full time and tour. We got a five-week, West Coast tour in the fall of 2017 and had to quit our jobs. Definitely don’t regret it at all. Honestly, I wish I’d done it sooner, but I was too scared to take the plunge. I also think though that everything happens at the right time.

Last year, you re-recorded the ‘Human Child’ track as ‘Human Child II.’ The song sounds dramatically different with the inclusion of psychedelic elements. Was this the beginning of FTY’s new sound?
The original version of ‘Human Child’ was recorded in our bedroom, just the two of us. When we went on tour, we started playing the song with the full band and it was going over really well live. We had a show in Charleston, South Carolina and stayed at Rialto Row, a recording studio. The engineer, Wolfgang Zimmerman, ended up having the night free, and we recorded ‘Human Child II’ on a whim. We loved the way it sounded — psychedelic and dreamy. We carried some of those elements to the upcoming EP.

Your recent single ‘Back to the Wall’ sounds like a brand-new Frederick the Younger with a fresh and confident direction. Will we hear more of this energetic pop sound on your new EP releasing in January?
Thanks! We’re really excited. We feel a deep connection with all six songs. It’s a mix of energetic songs and slower, moodier songs. It’s a more evolved sound for us. We recorded the EP with Kevin Ratterman at La La Land. We’ve actually worked with Kevin on all three of our past EP/album releases. We work really well together. The most important thing is to have a producer who understands what you’re trying to do. And we feel very grateful to work with sonaBLAST! on this release. They’re amazing. It feels good to have a team. •