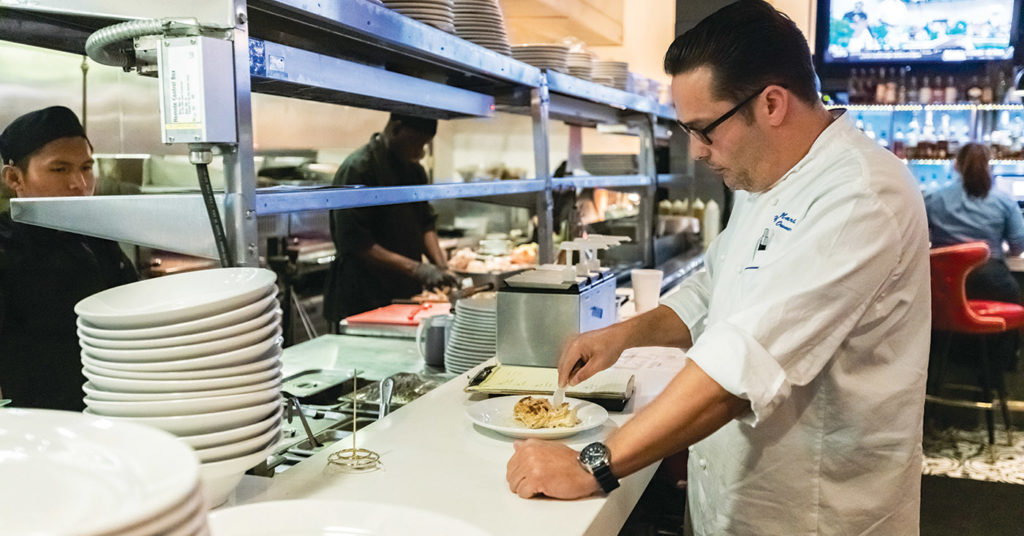 Olé’s owners, Rick Moir and cousins Yaniel and Fernando Martinez, as well as Fernado’s wife, Cristina, have managed to create their own restaurant empire in just seven years, and they hope to harness some of the lasting influence that other Louisville dining giants have fostered over the years.

And part of that includes cultivating kitchen employees who learn there and move on to work for other restaurants or to start their own concepts. Like the flow of chefs and restaurateurs from the Grisanti family restaurants that started with Casa Grisanti in 1959 and included Mamma Grisanti, which were known for rearing great, Louisville chefs.

“We don’t have the same name as Grisanti, because it’s kind of like a historic symbol of the culinary world in Louisville,” Yaniel said. “We probably want, in the future to be that other name that people call besides Grisanti. Instead of, ‘well, remember Grisanti?’ ‘well, remember Olé Group?’ You want to build that legacy, that history.”

Moir, the company’s chief operations manager, said they fully support their chefs and workers to pursue their ambitions. “We want our guys to open their own places. We want them to be a part of what we’re doing. We want partners, we want chefs that are invested in what we do as well. Everybody’s growing. It’s good for the company, good for the community.”

Moir is part of the Grisanti family tree himself, having come to Olé from Equus Restaurant & Jack’s Lounge by Dean Corbett, who cooked at Michael Grisanti’s Sixth Avenue.

When the Martinezes opened their first Olé restaurant “they did everything,” said Moir.

“The three of them were the backbone,” he said. “They’ve done everything that you can imagine: paint, clean toilets, cook food, run the front of the house.”

But as Olé has grown, help in the kitchen has become a necessary component of the Group’s operations. Each outpost has its own head chef who, in turn, has their own staff to command.

Sometimes, they stay on for years, as Olé’s corporate chef, Zack Wolf, has done, and other times, they “absorb and keep going,” said Yaniel, similar to what he did when he was starting out.

There’s Reed Johnson, the chef for Wiltshire Pantry’s gourmet cafe at the Speed Art Museum. He used to make “some of the best barbecue we’ve every tasted anywhere” at the Red Barn Kitchen, said Moir, a concept from Olé that is now Joe’s Older Than Dirt.

And Allan Rosenberg, who was just tapped to head the Galt House’s new restaurant after closing a popular concept of his own, Butchertown Pizza Hall. Previously, he worked for Cena, an Italian restaurant from Olé that occupied a space downstairs of their Jeffersontown Mussel & Burger Bar location.

Other Olé alumni are Jon Pauly and Mark Ford, who used to work for Artesano, which has been replaced by Olé’s Steak & Bourbon. Pauly is now the executive chef at The Village Anchor, and Ford is the chef de cuisine at Anoosh Bistro.

“We don’t have any secret recipes or anything like that,” Yaniel said. “We just open our books to anybody that works for us.”

And even though he and Fernando are busier than ever (remember those two new concepts — an experiential, Cuban restaurant named La Bodeguita de Mima and a fast casual Venezuelan eatery called Señora Arepa), they still find themselves in the back of the house regularly, checking in on operations and instructing employees.

“I’ve never been out of the kitchen,” said Yaniel.

But, just as every dish is different dependent upon who is consulting the recipe (an observation courtesy of Yaniel), Olé is not a clone of Grisanti even though its formula may seem familiar. It is its own, distinct dining dynasty.

Many of Olé’s restaurants are based on Latin American countries: Mexico, Venezuela — where Cristina is from — and Cuba, where Yaniel and Fernando grew up.

They’ve made their own, distinct marks on Louisville’s restaurant scene, too.

“Like pickling stuff when, before, nobody was pickling,” said Yaniel — as well as more tropical influences.

But, Yaniel still feels a kinship to the Italian restaurateurs he never got to cook alongside.

“I think it’s kind of like a stamp in history everybody wants to make somehow,” he said. “Some people do it through maybe acting in a movie. We would like to leave a legacy about this Group, like Grisanti.” •