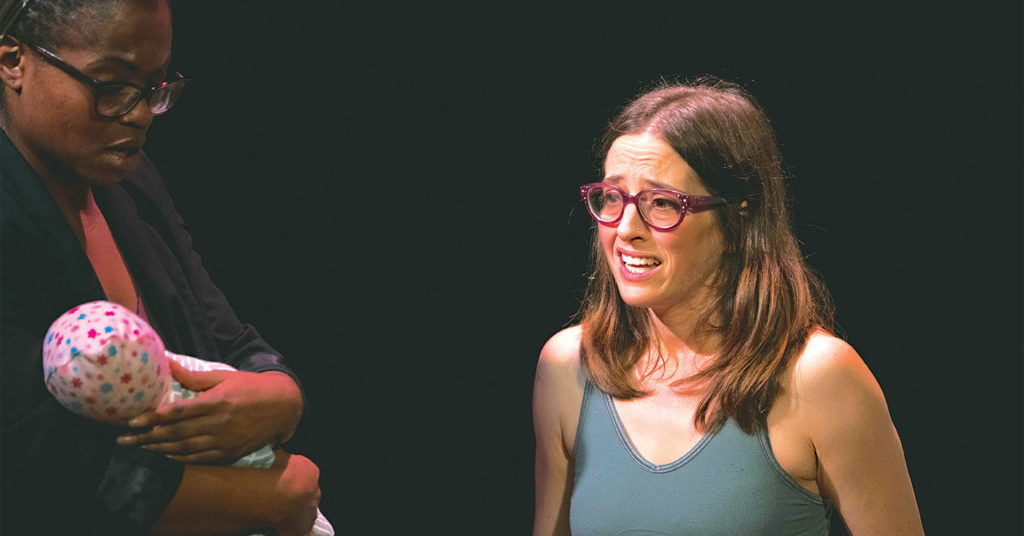 Ebony Jordan and Tamara Dearing in ‘Mine.’ | Photo by Jonathan Cherry.

Since its founding in 2011, Theatre [502] has consistently championed a mix of recent works by adventurous playwrights of quality, some with national renown, some still emerging from the regional scene.

This season marks an organizational turning point for the company: Founders Amy Attaway and Gil Reyes have stepped away from active artistic roles to become “emeritus” artistic directors (the founding member, Mike Brooks, left a few years ago).

But the show goes on. And the first production under the new artistic team, Diana Grisanti and Steve Moulds (yes, the same who became a “Jeopardy” champion last week) is a fine example of Theatre [502] at its best.

The play is by Kentucky native, Juilliard School graduate and now New York-based Laura Marks. Marks’ work may be familiar to Louisville audiences who saw “Bethany” a few years ago at The Bard’s Town. It’s a taut, naturalistic, contemporary drama about desperate strivers in an exurban post-apocalyptic landscape of abandoned homes in the wake of a financial meltdown (think 2008).

Marks’ new play, “Mine,” is likewise as naturalistic as it can be. Here the action focuses on two, newly minted parents. Mari (Tamara Dearing ) and Peter (Neil Mulac) have opted for a home birth, complete with a birthing tank in the living room. So, the baby’s arrival is a noisy, splashy, joyous affair.

The parents welcome the child with a mix of bliss and anxiety — but mostly bliss. Mari is noticeably smitten with the aroma of the birthing blanket, which for her expresses the essence of the newborn. All is well.

Until the next morning when Mari lifts her infant and announces her disturbing conviction that overnight her own baby has been replaced by a substitute infant.

In the nonfiction world outside the play, there is, of course, a clinical psychiatric diagnosis associated with Mari’s announcement. But there is nothing “clinical” about this script or about the action that follows.

Mari is surrounded by caring people. Her husband is ambitious and hard-working, but revels in the pleasures of being a new father. Her mother, Rina (Carol Tyree Williams), is wise, perceptive and supportive. Her midwife, Joan (Ebony Jordan), is expert and committed.

They reason with her in a compassionate, nonjudgmental way.

But on a trip to a nearby park, Mari meets another woman, the mysterious Amy (V. Reibel). Of her, I will say nothing more.

Marks has a knack for wringing heart-clenching suspense from what seem to be quite normal scenarios. And under the nuanced direction of Moulds, watching the cast of “Mine” is like looking through a pair of binoculars while someone else twists the focusing wheel. No sooner do we think we understand the pattern than a sudden shift reveals an alternative truth.

Around the world, some “fringe” festivals have become so well established that it’s hard to tell whether there’s any “fringe” left at all.

Not so with the Louisville Fringe Festival — which by a mix of design, happenstance and sheer necessity is still very much an adventure in progress. Heck, I sort of wonder whether the name “Lounatic Fringe Festival” might not work. Would you have it any other way?

Just remember to take deep breaths and recite Marshall McLuhan’s mantra: “The medium is the message.”

This year’s Fringe will take place in four venues and — as nearly as I can tell — involves circa 50 different performances that include scripted and unscripted works; collective and solo improv; human bodies in motion and in stillness; tributes to icons and meditations on the art of the striptease; multiple takes on Shakespeare; art inspired by concerns about climate change and widowhood at all too young an age. There is an overall schedule (albeit somewhat cryptic) on the website below, and there are many event pages on Facebook, if you don’t mind using social media).

If you’re new to the Fringe, Keel said he recommends “The Stoner Morning Show (AT NIGHT!)” This is a mix of stand-up comedy, long-form improv, dance and puppetry. All this takes place in the context of a framing device: Your hosts are two, deeply stoned news anchors for a morning news show.

For adventurous Fringe folk: In partnership with Pandora Productions, the Fringe is using the Henry Clay Theater on multiple nights as a venue for experimental theater, storytelling and a first-look staged reading of Ben Geirhart’s new play, “Exhumed” on Sunday, Nov. 10.

There are multiple performances scheduled of Baby Horse Theatre’s space alien death ritual piece, “Sepultre,” which Keel tags as “on the riskier end of the spectrum” (at Louisville Public Media at 619 S. Fourth St.).

Nerd-Esque Burlesque is what it sounds like, said Keel — a nerdy approach to the classic art of striptease. Two performances of the show, “Where Multiverses Collide” will be at Acting Against Cancer at ArtSpace at 323 W. Broadway (Nov. 8 and 10).

One last recommendation (from among a two-week feast of offerings): two nights of Shakespeare-related programming at the ArtSpace venue. Better Strangers Shakespeare presents “The Rotten Orange Shakespeare Festival” (which starts with a roll of the dice and proceeds from there); “Fat Juliet,” which has to do with eating disorders, the Christian Right and AC/DC; and Keel’s own “I’ll Turn To Sparks Of Flame,” a one-person show performed by Mollie Murk. •