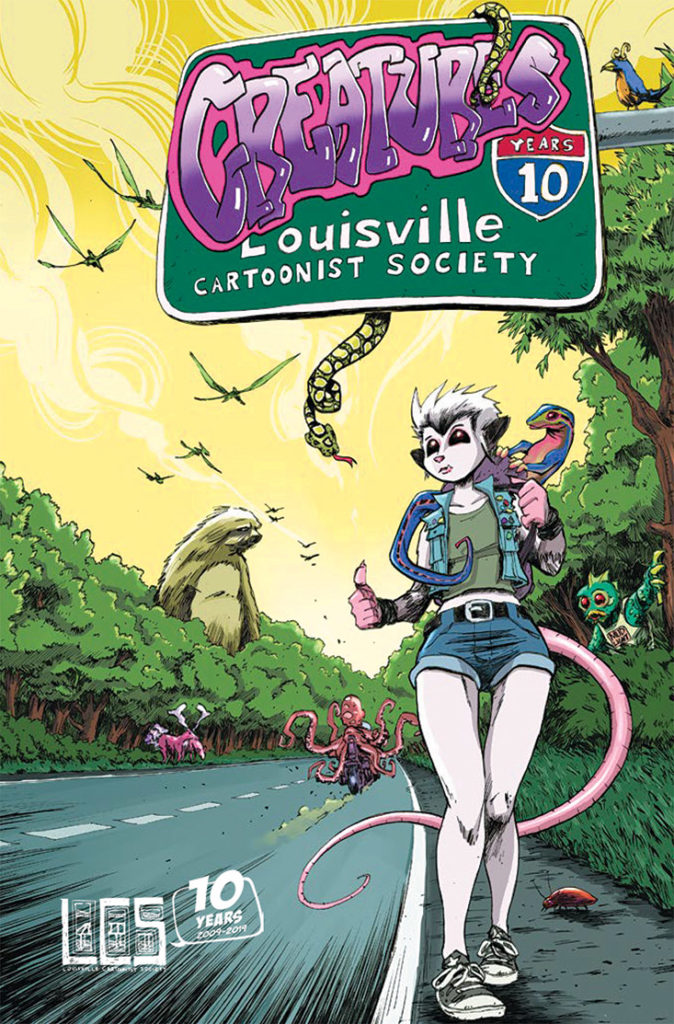 The Louisville Cartoonist Society will celebrate its 10th anniversary this weekend with the release of “Creatures,” the group’s annual anthology.

It’ll be celebrating artwork and storytelling, to be sure, but it’ll also be celebrating each other. A core group of 20 or 25 artists extends into a Facebook community that numbers in the high hundreds, and a group of them meet each Wednesday for what the organization calls a “drink and draw” session.

“It’s been a really nice social thing to have in my life,” said Zach Allen-Kelly, the Louisville Cartoonist Society’s spokesperson. “Every Wednesday, I get to hang out with a group of artists. It’s where I met my wife, actually.”

That would be Lori, an artist who, along with her husband, is a contributing artist to this year’s anthology, which features 10 illustrated stories by members of the group. Each year, a different theme is chosen, and this year’s theme was chosen through internal vote. Each of the artists brought their unique view, which is encouraged.

Allen-Kelly said it is suggested up front to not take the theme too literally or to bow to any stereotypes. This is evident in the current anthology, and previous themes have ranged from Louisville-centric stories to futuristic stories to an outer space theme. Each one is a catch-all in its own way, however.

“We like people to show variations,” he said. “I’m always proud when we have a diverse set of art styles to show all the different ways comics can be.”

In the 2019 anthology, readers will meet Stephen Johnson’s character Dingo McQuigley and his pal Doggo, who take a pseudo-educational tour of the human body, encountering cartoon versions of toe jam, warts and ear wax, which we learn from McQuigley is usually found in the ear “or on the tip of your dad’s car keys.”

Other chapters take us to a fast-food joint called Monster Burger that ultimately is inhabited by monsters; a house in the woods where a fearful little girl lives with her vicious dog; the heart of a city that is being terrorized by a giant trash snake; and a short comic strip that lays bare the shortness that is life.

Steven Beezer brings readers face to face with a monstrous minstrel to kick off the book’s second half. We then meet an Amazon monster slayer who, when faced with a horrific fiend, quips, “They never mention the smell.” Readers will follow an Indiana Jones-type character with a talking monkey into the jungle, go to a distant planet filled with dinosaur-like creatures and wind up the journey on a futuristic resort planet where artificial intelligence can get pregnant.

And the graphics are a treat, ranging from classic superhero-style artwork to simple line drawings to art that borders on the surreal.

For his part, Beezer said he was looking to capture the grit of the environment in his entry, titled “Some Creatures,” which is set in a Western environment in which an elderly rancher discovers a strange “demon” chained up in the desert.

The artist said the minstrel character in the story actually has appeared in a previous LCS anthology, and the characters in the story come from his “Trash City” series of stories.

“I like to big build worlds and try to have some kind of connecting thread, even through stand-alone stories like for the anthologies,” Beezer said.

In honor of the 10th year of the annual anthology, former LCS president Phil Back offers up a one-page retrospective of the organization to cap off the book, recalling that a call for submissions published in the Preston Arts Center’s newsletter in 2009 was ground zero for the Cartoonist Society.

After the group came together, a story in LEO Weekly about the society “was like sending out the Bat Signal over Gotham,” Back appropriately writes.

Allen-Kelly said roughly 100 to 150 copies of this year’s book will be printed, likely in multiple, small print runs. The initial release of “Creatures” will take place at GalaxyCon Louisville this weekend, Nov. 22-24, at The Great Escape’s booth.

After the event, the book will be available at local comic book shops, and a release party will be held at The Destination comic and gaming shop at 5031 Shelbyville Road. While the exact date of that event hasn’t yet been set, it will be open to the public.

In fact, every session, be it a LCS official meeting or a drink and draw session, is open to anyone interested in comic books, particularly someone who is looking to create their own comic.

Beezer discovered the group in 2010 through an ad in a local publication. He went to a meeting and has been involved ever since.

“I was so excited to find a group of comic creators in Louisville,” he said. “Although I’ve lived in the area all my life and had been making comics since I was a kid, I had never connected with any other people with the same interests in Louisville.”

“We try to be inclusive,” Allen-Kelly said. “It’s a tight-knit group, but it’s also a constantly changing group, too. People move or go in and out of the group, and new people come along. It’s been nice over the years to meet new people and see the group change and grow.” •