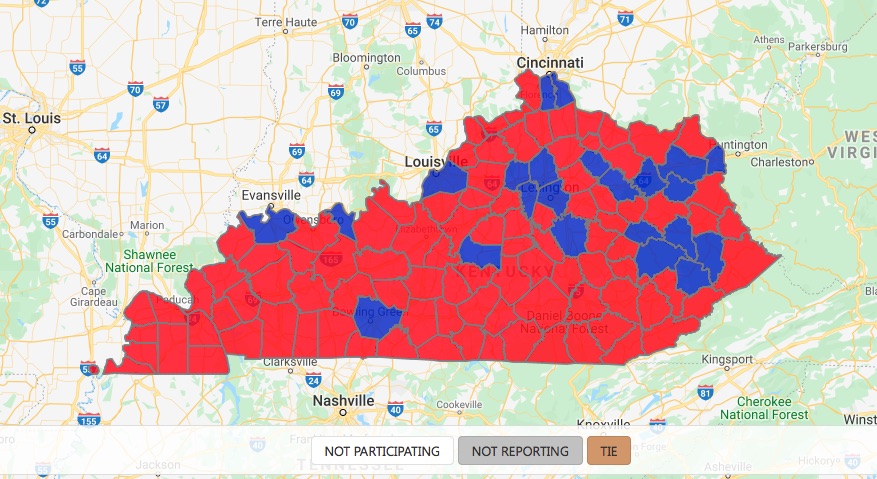 A map of the 2019 election results for governor by the Kentucky State Board of Elections.

The governor’s office is powerful, so it was a huge coup for Democrats to defeat Matt Bevin this week. But electorally, Tuesday, in my view, further illustrated the fundamental weakness of the state’s Democrats and the strength of its Republicans.

It’s worth comparing 2015 to 2019. The broader political dynamics of the country were fairly pro-Republican in 2015 (remember the GOP won control of the U.S. Senate a year earlier and would win the House, Senate and presidency a year later.) So at the time, anti-Obama, anti-Democratic sentiment seemed a big reason why Kentucky Republicans did so well in 2015. The GOP won the governor’s race here, defeated incumbent auditor Adam Edelen and nearly toppled Andy Beshear and Alison Lundergan Grimes.

Here are the margins for the 2015 races, based on how much Republicans won them by:

At least based on the 2018 elections, the country is in a fairly anti-Trump, anti-Republican mood. But not in Kentucky. Here’s what happened this week, by the GOP margin:

So essentially, the Democrats did significantly better in the governor’s race, but significantly worse in the contests for attorney general and auditor and were blown out again in the treasurer and agriculture commissioner races. On Election Day in 2015, Kentucky Democrats had control of five of the state’s six statewide offices. Next year, Republicans will control five of those six offices.

You can debate the differences between the various candidates in these races. But I think the clearest story from Tuesday is that it took the son of the fairly popular former two-term governor to narrowly defeat a very unpopular, highly-controversial incumbent governor — and Kentucky Republicans won every other race fairly comfortably in a bad national environment for the GOP.

Steve Beshear doesn’t have any other children who are likely to run for statewide office in Kentucky, and there aren’t a ton of Republicans as unpopular as Bevin. In fact, Treasurer Allison Ball, Agriculture Commissioner Ryan Quarles and Attorney General-elect Daniel Cameron have to be looking at Tuesday’s results and think they can be governor in 2023, since Bevin almost won despite all of his foibles.

Looking forward, Democrats both nationally and in Kentucky are now talking about knocking off Sen. Mitch McConnell, whom they hate as much or even more than they do Bevin. But I wonder if Bevin and 2019 was a unique dynamic. The incumbent governor had specifically annoyed the state’s teachers in a way that broke across traditional party divides, since educators are in every part of the state, even its more conservative areas. It was an off-year election, so conservatives who like Trump but weren’t that into Bevin likely just stayed home in a way they won’t with the president on the ballot. And the Beshear brand in Kentucky is stronger than that Mike Broihier, Amy McGrath or Matt Jones, none of whom have ever served in elective office in Kentucky. (Broihier and McGrath are officially running for the Senate seat, and Jones might enter the race as well.)

I’m not saying McConnell can’t be beaten — I just don’t think Bevin’s loss is necessarily a harbinger of that. Knocking off McConnell probably involves a different coalition with a different strategy.

In fact, Tuesday showed a growing urban-rural split that should worry Democrats in upcoming races. Beshear’s path to victory included huge margins in Jefferson and Fayette counties, which combined he won by about 36 percentage points (68-32). But the attorney general lost the rest of the 118 counties to Gov. Matt Bevin by a combined 12 percentage points (44-56.) The percentage of people who live in rural areas is higher here than in all but seven states. Beshear won largely because people in Louisville and Lexington are really turned off by Bevin. (Cameron lost Louisville by 19 percentage points, a much smaller gap than Bevin’s.) The margins that Republicans are winning in the rural areas usually can’t be made up by Democrats in the cities.

The results from Tuesday (Beshear barely defeating the highly unpopular Bevin), in my view, do not rule out the idea that the Democrat might want to try 1. A non-white candidate (Charles Booker, Scott), 2. a candidate from the state’s rural areas (Rocky Adkins, Broihier) and/or 3. A more economically-populist candidate (any of those four.)

“We have a lot to unpack, including Democrats still acting like a Black person cannot win statewide office. We need to reconcile losing every constitutional office. And we need to hold the governor-elect accountable. All of this is possible. It must be,” Scott wrote in a Twitter message on Tuesday night.