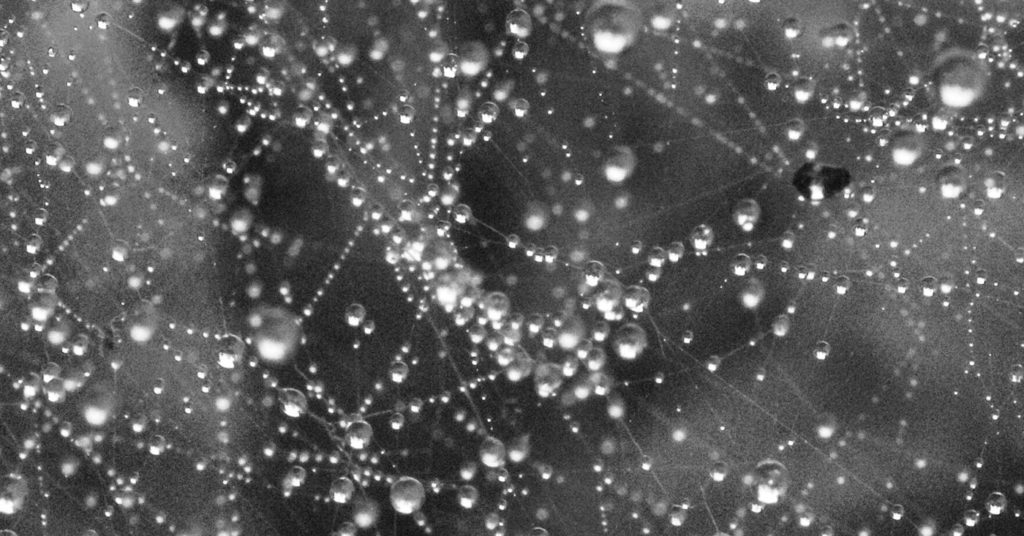 Sublimation refers to the process of matter transforming from a solid directly into a gaseous state, bypassing the liquid stage. In dye sublimation, dye ink is turned into a gas that bonds with the polymer molecule of a specially primed surface via transfer paper and a heat press, creating images that are brilliant and permanent. In a similar process, a digital printer applies drops of ceramic ink onto a glass surface. The ink then fuses with the glass when fired, creating images that are vibrant and enduring. Louisville native artists Matt Gatton and Madison Cawein take these processes to the next level in their joint exhibit “Inscapes,” presented by the Moremen Gallery.

Cawein’s photo-realist oil paintings render graceful moments such as an ocean wave crashing, light glowing on grass or a flower floating. For this exhibit, he turns his attention to capturing these moments through photography. His black and white photograph “Cosmic Web” is a magnified view of dewdrops adorning a spider’s web. Larger orbs of water are featured in the foreground, while delicately beaded strands of webbing create a cosmos-like depth of field in the middle and background. At first glance, the image appears to be of a starry night sky, but, upon closer observation, it’s understood that it is, in fact, a web. The ambiguous nature of the image draws attention to the liminal reoccurring structures found in the vast and minute. Its printing on aluminum lends a luminescence that enhances this similarity.

The glass print entitled “Strange Attraction” is a distorted and highly exposed image of a gardenia floating in a shallow glass vase. Beams of light seem to radiate out from the softly shadowed swirl of the flower’s center. The media allows the pale color palette to be bright and light-infused, giving it an ethereal quality. This quality of light is also found in the piece “Arbor,” which depicts an outdoor path that is surrounded by a flowering arbor, creating a magical corridor. Rendered in sepia tones, the image is crisp and clear, with the white flowers reflecting light outward.

The photo sculptures and subsequent portraits by Gatton also explore the sublime and mystical. The series “Flamenco Goddess” includes a photo-collage bust and two portraits of a beautiful woman gazing over her left shoulder, head turned slightly in that direction. In her hair is a flamenco headpiece, and her off the shoulder, red garb harkens to the red frequently worn by dancers. The garment itself is composed of images of this dancer, further identifying her.

The surface treatment of the bust is a complex collage derived from several photos taken of the subject at different angles and in different light. The result is a subtle shattering of the surface that lends further depth and movement to the masterfully rendered sculpture. Perhaps the most compelling aspects of the bust are the dark, introspective eyes. They are the points from which the collage seems to radiate energy, breaking the fourth wall. The bust is, in turn, photographed and printed on metal in both black and white and color. The contrast of the two images offers further insight into Gatton’s skill and artistic eye. The black and white image has a smooth and understated quality. The light gradation applied to the bust is brought forward in the gray-tone scale, and the reflective quality of the metal surface lends vibrancy. This dynamic is captured in the color image of this series with the dye-sublimation process rendering brilliant and detailed color. The modulation of tones throughout the flat surface emits vitality. From afar the image appears to be that of a person, rather than of the bust. The fragmentation becomes apparent as the image is approached, and the subject becomes more complex and fascinating as the many facets are revealed.

Gatton also uses visual and linguistic clues to offer further insight into the complex nature of his subjects. Titles such as “Hanaq Pacha (World Above)” and “Cosmic Shaman” point to the inner identity of the person being represented. The bust of “The Playwright” has pieces of text incorporated into the collage as if the person is actually composed of these words that must be written. The piece “Maka Tanhan Tatanka Oyate (Out of the Earth A Buffalo Nation)” is adorned with the image of a herd of buffalo, alluding to the pure essence of this person.

Cawein’s pieces capture the fleeting moment when the physical world transcends into the sublime; the drop of dew or the ripple in water that harkens to the cosmic mystery. Gatton’s work considers the essence of identity; the unique individual, which mirrors the archetype. Within the works of both Cawein and Gatton is a timelessness that is stunning. •