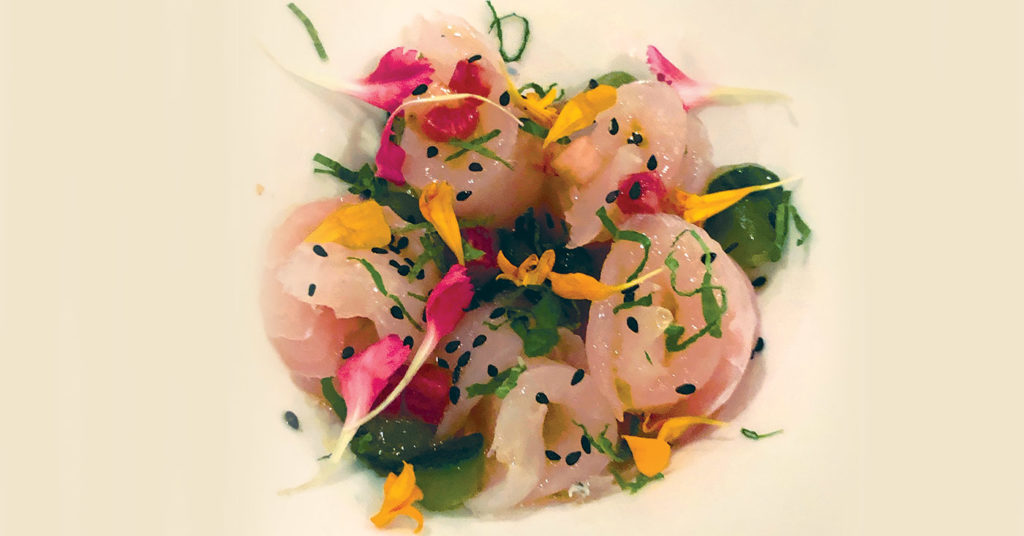 Gone is the bright, mustard-yellow exterior paint job that made Bistro 1860 stand out before the restaurant closed in 2018, now replaced by tasteful off-white with light sage-green trim. The huge 54-unit Cruvinet wine dispensing machine that made L & N Wine Bar (2004-2012) special also is gone, a victim of disuse.

Hearth on Mellwood Eatery is the newest occupant in the historic, 19th century, brick farmhouse at the corner of Brownsboro Road and Mellwood Avenue.

We dropped in for dinner with friends recently and found Chef Jason McCollum’s fare creative and exemplary. McCollum and his wife and co-owner Aenith, who also operate Chik’n & Mi nearby, have built a dining destination here since its August opening.

Hearth on Mellwood Eatery’s acronym is “home,” and renovations have achieved a homey look, assuming that your home is a 159-year-old farmhouse. The black-and-white checkerboard floor has been replaced by wood-look flooring, and the exposed red-brick walls now bear a dozen mirrors in antique gold-look frames. Each of the three dining rooms still sports a gas fireplace, which looked mighty cozy on a chilly evening.

The menu is sourced largely from regional farms, and it frequently changes depending on what’s seasonal and available in the local market. Its seven entrées are from $16 (for a Black Hawk Farms Kentucky brisket burger) to $34 (for a seared Farmer Joe’s Kentucky duck breast).

Another dozen items, all good for starters or noshing with drinks, are subdivided among small plates, shareables and starters. The shareable dishes, all $10, are fancy veggie dishes such as fingerling potatoes with black garlic or rapini charred in duck fat with a scallop and house-cured duck ham. Three of the five starters are $10; and oysters on the half-shell are $16 for a half-dozen and $30 for a dozen. Four small plates range from $12 (for rabbit and pork terrine) to $16 (for lamb tartare).

Hearth’s bar is well stocked with short but well-chosen wine and beer lists and about a dozen creative cocktails all priced at $13. I liked my cocktail choice, the 20th Century, although this tart, refreshing golden potion of gin, Cocchi Americano quinine-spiked vermouth, cacao and lemon might have been more appealing on a hot summer day. A nonalcoholic ginger beer ($2) was sweet and hot with the punch of fresh ginger.

There’s no complimentary bread at Hearth. A portion of Blue Dog’s finest and butter is available on the starter menu for $4, but we passed and went directly to shared starters.

Crudo ($14) is Italy’s response to sashimi — raw fresh fish dressed in vinaigrette — and this rendition was done very well. Seven small fillets of cold, raw grouper (the fish of the day) were dressed with cucumber and sesame dashi and ponzu, rolled into scallop-size rounds, sprinkled with black sesame seeds and arranged with tiny pink and orange edible flowers and watermelon radishes.

Another shared appetizer, roasted heirloom carrots ($10), might sound pedestrian, but it proved to be one of the stars of the evening. A mix of dark red and golden carrots had been quartered lengthwise, roasted tender and plated on a mild, grilled-jalapeño hollandaise and a carrot-top chimichurri. The carrots were quite mild — you could have mistaken them for good french fries — but the flavor mix was spectacular.

A Marksbury Farm pork chop ($28) was huge and a good inch-and-a-half thick. It was perfectly grilled with neat, crisscross grill marks, with a rim of fat along one edge. It came out pale-pink inside, just as ordered and was not at all tough but firm, as befits pastured pork, with a good, mild flavor. The bone had been cut off after grilling but left on the plate, under the meat, for convenient picking and gnawing. The chop was plated on a gently spicy chocolate-guajillo pepper sauce akin to molé, a dab of tomatillo chow chow and crisp, fresh-pickled and charred endive and cauliflower billed as “cracklin’ salad.”

The cavatelli was handmade, bite-size pasta akin to gnocchi but made with flour without the potatoes, cheese or eggs that often elevate its cousin. Hearth’s fall cavatelli ($18), the only vegetarian entrée, was made with golden-beet, rye pasta and tossed with braised beets, cauliflower florets and rings of grilled autumn squash with crumbled chèvre and pistachios.

Pretty, multicolor macarons in three flavors came with big, juicy blackberries in a goblet. I grabbed a peanut butter macaron and was happy.

Key lime pie ($9) came deconstructed in a mason jar. All the traditional ingredients were there, from buttery, graham-cracker crust at the bottom to authentic, tart-sweet lime filling and freshly whipped cream on top.

Noise level: Most tables were occupied on a busy Saturday night, but it wasn’t too loud to chat with our tablemates. (Average sound was 79 decibels, on the loud side of a conversation.)

Accessibility: The historical building has been brought up to date and appears fully accessible to wheelchair users.