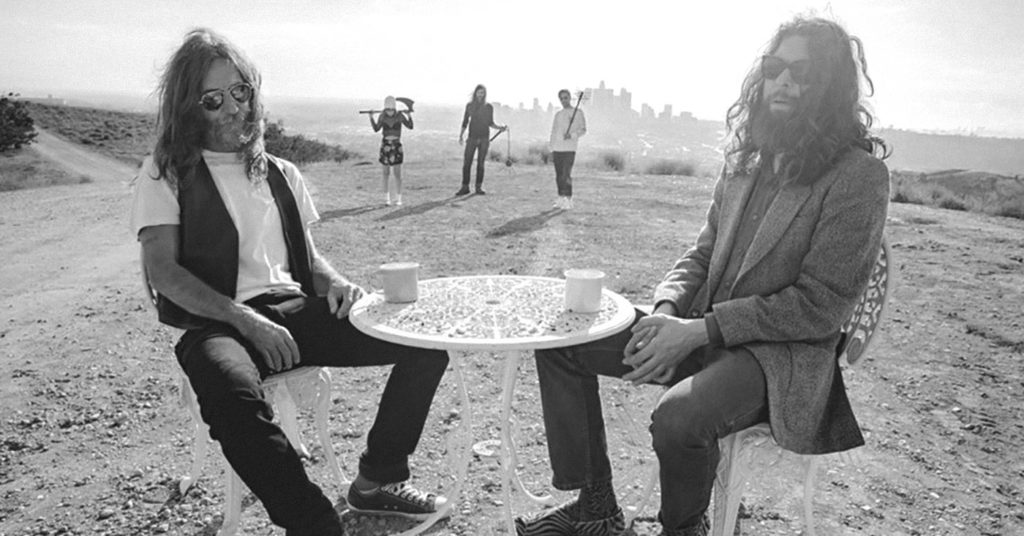 Black Mountain has been slinging their particular brand of critically-lauded psych rock since their 2005 self-titled debut. It’s a genre they continue to expand upon with their latest release, Destroyer. Before Black Mountain plays at Headliners Music Hall this weekend, we caught up with founding member and keyboardist Jeremy Schmidt to talk about the tour and weirdness of Kentucky weather.

LEO: You released Destroyer back in May. How’s the tour going so far?
Jeremy Schmidt: Well, we started touring before that really. We started in March just to get a feel for it but, yeah, the proper album cycle got underway in May. Basically, we’ve been on tour since then with a few short breaks in between. We’re on the long haul right now, where we’re doing around a three-month tour with a couple of five-day breaks in between.

I know Black Mountain has played Louisville several times before but, and correct me if I’m wrong, it’s been awhile, right?
Yes. And, yes, we’ve played there several times. Seems like I remember one time we were supposed to play there — there were all these crazy blizzards happening around there and a lot of the highways were closed, and the show was canceled. But, otherwise the weather has always been quite nice.

You’re lucky, then. Nice weather in Kentucky is pretty rare.
[Laughs] You guys do seem have some extremes there.

So, on your end, as far as the songwriting itself goes, are you actively involved in the whole process? How does that process take shape within Black Mountain? Are you one of the main songwriters?
Yes, sometimes I am. A lot of the times Steve [McBean] will write a song, and it more or less doesn’t really change much from its inception. Then, other times, it’ll be more kind of like an idea that we flesh out as a band a little more, or I’ll come up with some arrangement or something. We’ll take it apart and put it back together and see how it looks. I definitely get involved with that process quite a bit.

Going back to the album a bit, where do you think it stands in the Black Mountain discography? To me, there’s always a familiar thread running through your albums, yet none of them ever seem repetitive.
Yeah. It’s obviously different from the other ones, but I see it as a logical progression from the previous album and the ones before that. To me, it’s a lineage that makes progressive sense. For example, take Pink Floyd’s records. They all sound quite unique and different and kind of their own world, but they very much sound distinctively like Pink Floyd records. I guess what I’m saying is: All the records to me feel very much like a Black Mountain record. But, hey, I’m biased. I’m in the band. [Laughs]

Is there anything on the new album — that you wrote or otherwise — you are specifically proud of or pleased with?
‘Horns Arising.’ It was a riff that we had lying around for a long time, and then we had two parts that went together well. Then, we didn’t quite know how to bridge them or whatever. I just decided I would try and write this little bridge part, which is the acoustic bit in the middle. I’m really happy with that, and, also, it’s just one of those things where we had that stuff kicking around since before we even did the record prior to this one. We just didn’t quite know how to integrate these parts that we really liked into something. They just needed to gestate for a while, and then we went back to them. I don’t know, I’m always proud of things like that — when you are able to do something like that. Where we can resurrect something that’s been lying around for a while and breathe new life into it.

I’m always surprised by how often the artists I talk to say that, whenever they release an album, ‘Oh, yeah, half the song ideas we’ve had sitting around for years.’
We have a few like that. You never know when it’s going to have its moment in the sun.

What kind of balance of song choices can we expect to hear on this tour? You obviously have a rather healthy catalog to choose from.
You can expect to hear a lot of the new album, but also a lot of the older tunes, too. It gets a little trickier as you make more records. We can’t play all of them, so there’s more songs that you have to not play as a result of having more songs. [Laughs] We go see shows, and we know bands that have been around forever that we love, and we like to hear the old songs too, so we know that. We actually like playing the old tunes too. It works out symbiotically with the audience or whatever because we still enjoy playing them. •