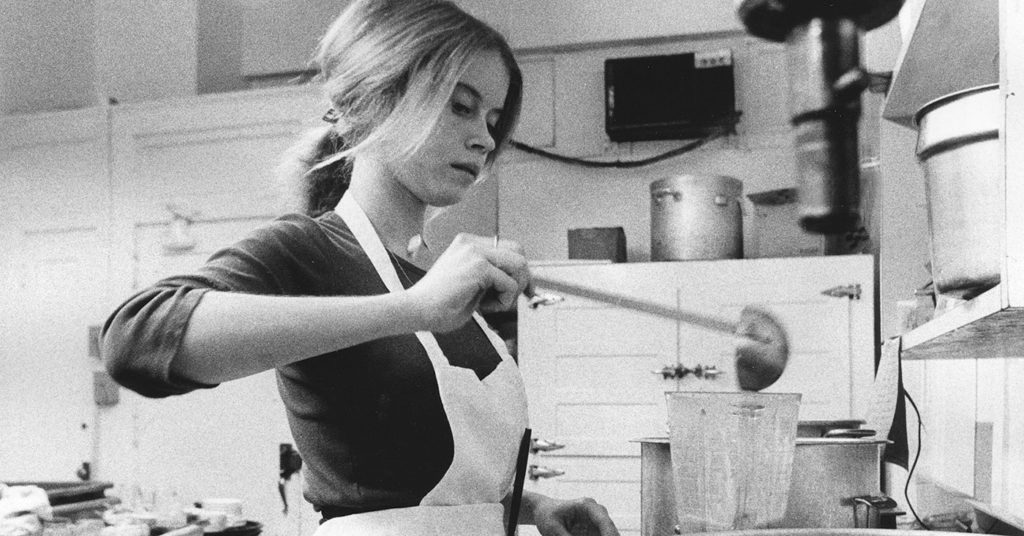 In 1975, Katherine Nash ladles some tomato soup into a blender. | Photo by Robert Steinau, the Courier-Journal.

In 1974, while the Grisanti family was creating its empire with fine dining in Louisville’s meat-and-potatoes restaurant desert, The Fig Tree Restaurant at Third Street and Broadway also was bringing innovation to the city’s dining scene: French food.

“Because we were a new restaurant, and I had my reputation coming with me, kind of French-Southern food, we were packed,” said Cary.

She entered the industry at a time when there weren’t many female chefs nationally, let alone in Louisville. And in the years since, her Bardstown Road restaurant Lilly’s Bistro has become a staple in the fine dining scene, another one of the city’s originals.

Cary had spent the three years before ‘74 in the Washington, D.C. area, assisting under another French-taught, female chef, working for restaurants and running her own catering business for the political elite. The Fig Tree was her first restaurant gig in her hometown.

“When I came back here was when it really hit me of, like, now that I’m back in Louisville, and now I’m going to work at this restaurant, it dawned me that this was my career,” she said.

Cary lasted one year working at the grueling pace required by the The Fig Tree, but her next venture in the Louisville restaurant scene was La Peche, and then, Lilly’s, now regarded as one of Louisville’s best, longest-running restaurants after 31 years in business.

Cary was born and raised in Louisville and would prepare meals for parties that her parents threw. After high school, she decided she didn’t want to go to college like her sisters did and, instead, moved to D.C. She began her tutelage under the wife of a State Department official who attended the Le Cordon Bleu cooking school in France. From there, she started her own catering company, helped by her roommate’s political connections, and then, was hired on at a restaurant as their lunch chef.

When Cary returned to Louisville for a sister’s wedding in 1974, she decided to stay. Her now-husband recommended her to the owners of The Fig Tree, and they were impressed. She was given wide creative control over the menu, which she filled with French specialties. But, she learned some things, too, such as how to make what was, then, practically the official dish of dining out in Louisville: steak.

The days were 19-hour shifts, and Cary could only stand it for so long.

For two years, Cary stayed out of the restaurant business altogether and took a job at Stewart’s Dry Goods, but, when a recently-divorced friend with a talent for cooking wanted a change, Cary quickly suggested starting another catering business. That turned into La Peche, and in 1988, Cary opened Lilly’s.

There, she started the farm-to-table trend in Louisville before there was a word or phrase to describe the close relationship she had with Kentucky growers and meat producers.

She would call them on Mondays and tell them what she was in need of.

“And it worked out really beautifully that way,” said Cary. “You got to know the farmers.”

Three decades later, Cary still cooks at Lilly’s every day, working from 8 a.m. to 5 p.m., before returning at 7 for another two-hour shift.

On a recent Wednesday afternoon, two hours before dinner service, she emerged from the kitchen and wearing a white apron, slightly grungy from the day’s work.

“She’s cooking up a storm,” an employee had told me a few minutes before.

During our conversation, she occasionally called out orders and questions to her workers.

Cary hasn’t always been so comfortable ordering around her staff, she said. As she’s built her skills and status, she’s also grown more confident in quashing bad behavior when she sees it.

Cary did have female role models in the cooking world — her teacher in Washington and Courier Journal columnist Camille Glenn, among them — but most in her field, and even working under her at the The Fig Tree, were men.

In addition, Cary grew up in a family where “please” and “thank you” were a part of everyday conversation, and four-letter words were not allowed. That was far different than the culture of the restaurant industry.

So, when Cary started at the The Fig Tree, she had the work ethic and the know-how, but not all of the necessary fearlessness.

“In the beginning, I was kind of scared to death of everything a little bit,” Cary said. “It was a whole new thing. It was a scary world out there in the real world when you’re running a kitchen.”

She had an employee who needed to be dragged out of strip clubs to work, one who came in drunk and brandishing a knife and another she asked the The Fig Tree owner to fire because the guy was “dangerous around me in the dark.”

Cary didn’t like confronting or firing employees, whether it was for stealing or some other bad behavior. Critiquing a worker with the right tone was another special skill that Cary didn’t possess at first.

Now, as a longtime restaurant owner, Cary can say she’s mastered all of that.

“And that comes with age and also just more confidence in yourself built up over the years,” she said.

She’s started to notice, too, that the women arriving in today’s restaurant industry — of which there are many more than there used to be — seem just as self-assured as she is today.

“I don’t know if I feel responsible,” she said. “I feel, I’ve seen a lot, I’m glad we are where we are now. And it’s great to see so many female chefs around the country and fantastic restaurants with great reputations doing amazing things, and I think that continues to grow.”

What Cary does feel justified in taking credit for is making Louisville’s dining scene what it is today: a foodie town with a national reputation.

“I think we continue to serve great food, continue to support our farmers and continue to hold the bar high and to keep it there,” she said. “And I think people, other restaurants and other people in Louisville will say that Lilly’s, for this length of period, has shown that a good restaurant can last.” •