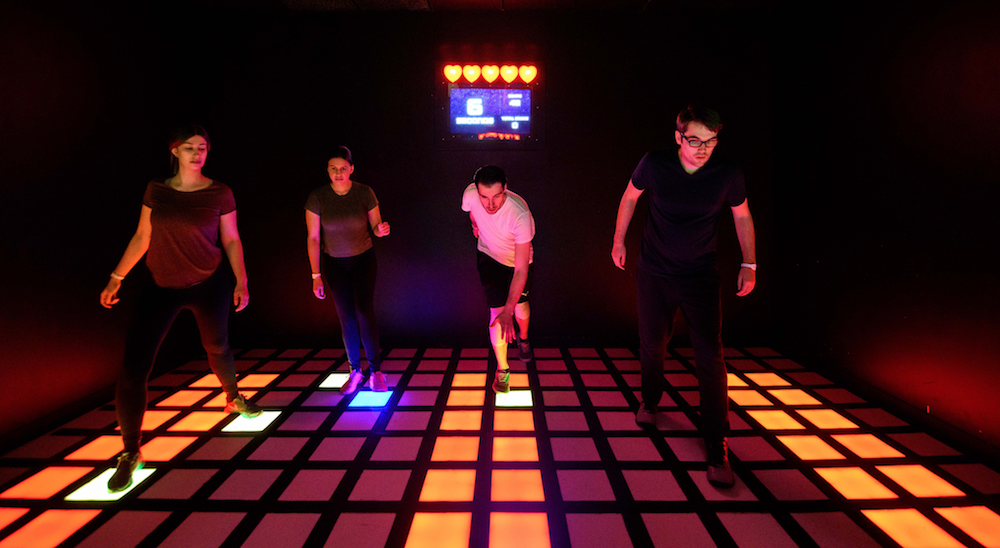 If you enjoyed the 1982 movie “Tron,” there’s a good chance you’ll similarly enjoy Activate Games when it opens in Louisville in December.

In that film, Jeff Bridges’ character Kevin Flynn hacks into a mainframe computer, gets stuck in cyberspace and is forced to interact with the various programs to escape. Inspired by the video game “Pong,” “Tron” imagined a sci-fi world where a human being could merge with technology.

Well, when you walk into the dark and futuristic rooms at Activate Games and start interacting with the hundreds of proprietary game variations that “test your physical and mental agility,” you might just feel like a character in the film – or at least in a video game.

Activate Games was founded in Winnipeg, Canada in 2019. The Louisville location — 2510 Hurstbounre Gem Lane — will be the company’s first venture into the United States. The owners of Lexington-based Breakout Games learned of the concept and decided to partner with Activate Games Canada to bring it to Kentucky.

“We really loved the idea of creating this immersive experience,” Bryce Anderson, Activate Games Louisville cofounder, said. “And we love the Louisville market.”

In short, Anderson and his business partners are betting big on Activate Games, as they are in the process of building out a 12,000-square-foot space with the help of design crews from Activate Games Canada.

The concept is not just unique — it’s every bit as immersive as advertised, if a brief preview was any indication. Here’s how it works: Players show up in, preferably, teams of three to five people, where they will pay $25 for a 75-minute session. They get an electronic wristband that will track them and their team, recording scores and times based on a unique ID each player will enter into the system. Those scores will be stored so teams can see how they stack up against other teams in various categories.

They will then find themselves in a dark space of 10 rooms (think a laser tag environment but without the vests and guns), and they can choose which concept to start with. A theme across games is that each team gets five “lives,” and when they touch or step on something they shouldn’t, a life is lost.

One room involves a “Mission Impossible”-style laser game wherein players will have to sneak through a three-dimensional laser maze. Another is a wall-climbing game that tests speed and awareness as players work against the clock to navigate a wall with touch-sensitive grips.

There’s a shooting game that also includes a laser maze, a basketball game that mixes team trivia with Pop-A-Shot, floor-based games that make you feel like you’re in a futuristic dance club and a word game that blends “Boggle” with hide-and-seek. In that game, the computer will offer a word, after which the walls will be littered with letters. The team must spell the word by touching the letters as quickly as possible before a series of giant “eyes” turn on. When that happens, players must hide behind obstacles in the room to avoid being “seen,” or they lose a life.

Some games are more physically taxing than others, involving intense running or shuffling, while others are games one could do after work just to blow off a little steam without getting too sweaty, Anderson said.

The one game that was operational during a recent tour afforded to LEO Weekly was a memory game similar to the card games many played as children that involved matching photos of animals and other objects through memory. The difference is, this game involves walls of color patterns. Players start by entering into an iPad what version of that room’s games they want to play, including difficulty levels. When the game begins, doors to the room will unlock, and a booming voice will offer game directions followed by a short countdown.

Intense, loud music then creates an atmosphere of urgency, and when you mess up, the voice booms, “Incorrect sequence. Re-memorize the sequences.” All the while, the clock ticks downward, costing points with each passing second. To call it “immersive” is to do the experience a bit of an injustice.

Anderson said each game ranges from one to three minutes, making it easy to experience numerous rooms and games in a single session. And while it may simply sound like a fun way to pass an afternoon, the people behind Activate Games see it something that also promotes health.

For one, it does get the heart pumping, and depending on the game it can also get the sweat flowing. More importantly, it invites positive human interaction.

“You see people on their phones a lot,” Anderson said, “and nothing beats a good Netflix show, but people aren’t interacting. What’s exciting about this is you get to interact very personally with people rather than doing it through a screen.”

The hope is that Louisvillians will embrace the concept, which would lead to further growth in Kentucky and beyond.

“We think it could be the next wave of entertainment,” Anderson said. “You couldn’t have invented this five years ago. “It’s technology people don’t get to experience much; you couldn’t build this in your home.”

Activate Games is located at 2510 Hurstbourne Gem Lane and is expected to open sometime in December. Those interested in getting advance tickets can purchase them online with a 20% discount while they last. Only 2,000 will be sold.