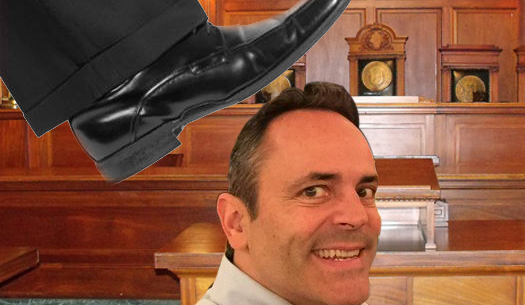 Vote Bevin Out! (And Party!)

‘13th’ Screening
Ekstrom Library, UofL
Free  |  5:30-8 p.m.
Ava Duvernay’s “13th” documentary, from 2016, links America’s history of racial inequality to the disproportionate number of African Americans in our prisons. Refreshments will be provided after this screening.

Book Launch: ‘Better Lucky Than Good’
Kentucky Derby Museum
Free  |  6-8 p.m.
Away from the betting lines and exclusive club rooms of Churchill Downs is another world: the backside of the track, where hot walkers, grooms, exercise riders and jockeys rule. This is what the Louisville Story Program chose for its latest project, “Better Lucky Than Good.” The Story Program, started in 2013, recounts the history of local places and events by recruiting people in the chosen community to write about their experiences. This is the first time that equine workers in American Thoroughbred racing have documented their jobs for the public, organizers say, and the Story Program spent three years engaging them, as well as residents of South Louisville. At this book launch event, meet and celebrate the more than 30 authors, who will be signing copies.

Vote Bevin Out! (And Party!)
Various locations (including your polling place)
Free  |  Times vary
It’s the day we’ve all been waiting for: Your chance to decide who the governor of Kentucky will be. Are we going to stick with the second most-hated person in the country to hold such an office, Republican Matt Bevin, or will we elect Democrat Andy Beshear who, if nothing else, is not the second most-hated person to hold such an office? It’s a race with big implications considering Bevin’s anti-marijuana, anti-gambling and anti-reproductive rights takes, so we expect to see you out there, casting your ballot. Afterward, there will be election events and watch parties aplenty, including guided tours of suffragist graves at Cave Hill and Eastern Cemeteries and evening get-togethers at Gravely Brewing Co. and Old Louisville Brewery.

Shakespeare in the Libraries: Hamlet
Bon Air Library, Louisville Free Public Library
Free  |  6:30 p.m.
Kentucky Shakespeare has moved indoors for the season. It’ll be bringing a two-actor, one-hour version of The Bard’s most popular play, “Hamlet,” to libraries across the city in this two month tour. If you don’t know the plot to the show already, the synopsis is as follows: “Hamlet discovers a web of deceit and corruption in his quest to avenge his father’s death.” If you can’t make this one, catch the show at the South Central Regional Library at 3 p.m. on Saturday.

Astronomy on Tap
Monnik Beer Co.
No cover  |  7-8 p.m.
Many love the “Star Wars” universe, but Jefferson Community and Technical College Professor of Physics and Astronomy Chris Graney has an alternate view: It might be on the wrong side of history and science. He’ll be at Monnik Beer Co. for an informal chat on the subject.

Louisville Fringe Festival
Various locations
$5 per show  |  Times vary
It’s the second year for the 11-day Louisville Fringe Festival, and this platform for off-kilter independent theater has almost doubled its number of artists and performing groups to 45, featuring such figments of the imagination as robot Shakespeare and “verbally abusive angels.” On Thursday, catch “Dreadfully White” a one-man show (if you don’t count the five and a half styrofoam heads they’ll be sharing a stage with) about parents instructing their child on their twisted family dynamics, or a storytelling show from comedian Dave Maher about the time he was in a monthlong coma. Tickets are $5 per show at the door.

Tabletop Games for Trans Health
Safai Coffee Shop, Bardstown Road
Free  |  6-9 p.m.
Play games in a “chill space” while simultaneously raising money for the Kentucky Health Justice Network Trans Health Program (20% of all coffee shop sales go to it). There will be at least 16 games from KHJN, as well as from The Louisville Game Shop, including What Do You Meme?, Scrabble and The Oregon Trail card game. KHJN will have a table with stickers, zines, info and emergency contraception. Its trans health program helps gives Kentuckians in the community access to healthcare through financial assistance, insurance help and more.

‘Celebrating a Tradition of Fashion Photography’
Art Sanctuary
Free  |  6-9 p.m.
The Louisville Photo Biennial’s closing party is also a visual journey through the city’s fashion photography scene, presented by The Voice of Louisville. Stroll through the gallery while listening to music from Charles Nowell and eating hors o’oeuvres from Wiltshire Pantry Catering. LOOK: Louisville Art is also celebrating the release of its eighth Art Guide, showing where to go to experience art in Kentuckiana.

Sauerbeck Family Drive-In Free Triple Feature
Sauerbeck Family Drive-In, La Grange
Free  |  6:30-11p.m.
If anything is worth going to a drive-in in November, it’s three free movies. Bring the kids to watch “The Polar Express,” the new “The Grinch” and Jim Carrey’s “How the Grinch Stole Christmas.” The show is free, but if you donate $20, it will go alto the Kentucky State Police’s Shop with a Trooper event.

Krish Mohan’s ‘Politely Angry’
The Bard’s Town
$5 online  |  8 p.m.
Kris Mohan has been featured on NPR and toured across the country with his comedic commentary on social, political and philosophical issues, including immigration and economics. He brings his new hour of comedy, “Politely Angry,” to Louisville.