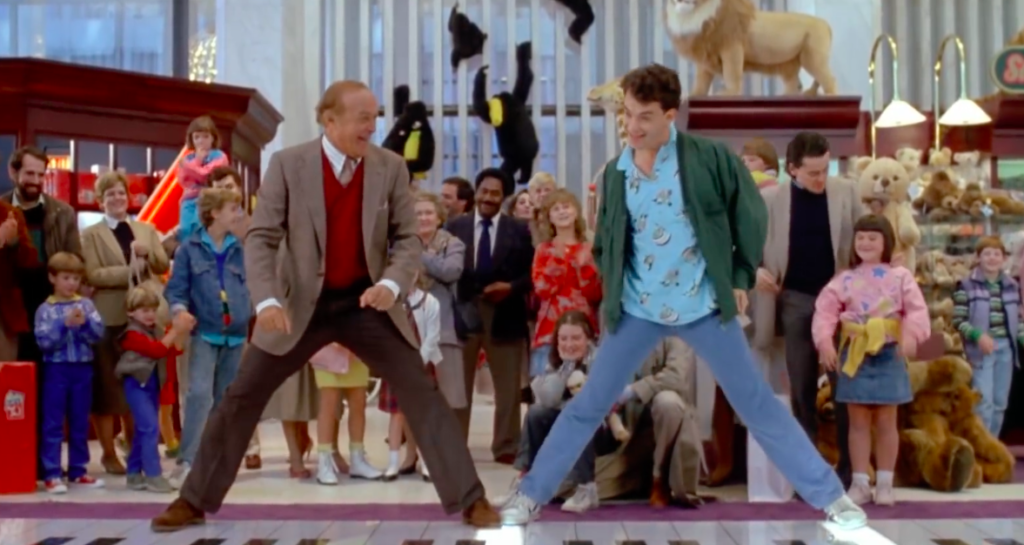 A scene from the movie 'Big' starring Tom Hanks.

T. Hanks Giving
theMerryWeather
No cover  |  5 p.m.-2 a.m.
It’s a holiday with a bigger feast than what’s going on at your aunt’s house: T. Hanks Giving — a celebration of food, camaraderie and a three-day banquet, starting Monday, of Tom Hanks films. Get it now? T. Hanks Giving? Each day of the celebration, theMerryWeather will show movies, including “Big,” “Forrest Gump” and “A League Of Their Own.” Come hungry and ready to be quenched, because there will be free popcorn and Apple Pie-Tais (apple pie Mai Tais), as well as grilled cheese and TOM-ato soup on Monday. The festivities go from open to close (5 p.m. to 2 a.m.) on Monday and Wednesday and 5 to 9:30 p.m. on Tuesday, followed by karaoke.

Nerd Nite
Gravely Brewing Co.
Free  |  7-9 p.m.
Three passionate people talk about something that interests them. You listen. There’s beer. This month, we have Lane Hettich here to tell you how to turn your kempt lawn into a herb and vegetable garden; Brian Storz, co-founder of Kentucky Organics, gives a presentation on “The Evolution and Ecology of Cannibalism in Spadefoot Toads”; and Jennifer Potochnic, a UofL School of Music teacher, regales you with the virtues of the oboe.

Thunderdome: Sleepover
Kaiju
Free  |  9-11 p.m.
It’s time for Thunderdome, a Louisville comedy competition in which seven local comedians create stand-up sets around one theme. This month, they’re mining the fertile land of sleepovers, and the audience is “highly” encouraged to show up in pajamas. (You may not stay the night).

Catholic Charities Thanksgiving Celebration
Migration and Refugee Services Campus
$5 donation requested  |  11 a.m.-1 p.m.
Welcome Louisville’s migrant and refugee communities with a Thanksgiving lunch (which might be the first for some families). Bring a side to go along with turkey and other Thanksgiving classics prepared by students in Catholic Charities’ Common Table program. There will be children’s activities and free books for the kids, as well as remarks from Louisville’s Chief of Community Building, Vincent James.

Thanksgiving Volunteering
Hotel Louisville
Free  |  4:30 a.m.-7 p.m.
Wayside Christian Mission is serving meals and handing out clothes to Louisville’s homeless community on Thanksgiving, and they’re looking for help. The Courier Journal reports that volunteers are welcome to participate by coming to Hotel Louisville with an ID anytime after 4:30 a.m. on Thursday. Help, including with clean up, is needed until 7 p.m.

Light Up Louisville
Sixth and Jefferson streets
Free  |  3-10 p.m.
Everyone knows that as soon as Thanksgiving is over, Christmas begins, and the city of Louisville has been taking that to heart for 39 years. This is the official kickoff to the holiday season in Louisville, a full day of events starting at 3 p.m. with a holiday marketplace and children’s activities and ending at 8:30 with fireworks and Santa turning on the lights outside of City Hall. Festivities include live entertainment, the Lots of Lights Parade and pictures with Santa.

Miracle on Market
732 E. Market St.
No cover  |  5 p.m.-midnight
For the second year in a row, this Christmas-themed pop-up bar appears overnight at 732 E. Market St. (in the Green Building) — with the aid of helpers from up north (New York City). Bring the parents for $12 holiday drinks and $5 shots, including the Snowball Old-Fashioned (with caramelized pecan bourbon and molasses syrup) and Jingle Bells Nog, as well as screenings of favorite holiday films such as “Elf” and “Home Alone.” Organizers say that the “‘halls’” “will be decked” with lights, garland, ribbons and more. From Friday on, it’s Christmas every night until New Year’s Eve, featuring holiday karaoke on Wednesdays. The Miracle bar started in New York City five years ago and now has over 90 locations.

Salsa Night
The Butchertown Social
No cover  |  9 p.m.-1:30 a.m.
Don’t know how to dance the salsa? No problem. Dance instructor David Sommer of DaytOn1 Salsa will lead a beginner’s lesson at this event, followed by an open dance floor for salsa, timber and bachata moves.

EmoNite 502
Barbarella
No Cover  |  11 p.m.-3 a.m.
If you’re visiting your childhood home for the holidays, you might as well throw it back as far as possible by digging out that studded belt and thick eyeliner for a night of dancing to your favorite emo jams.