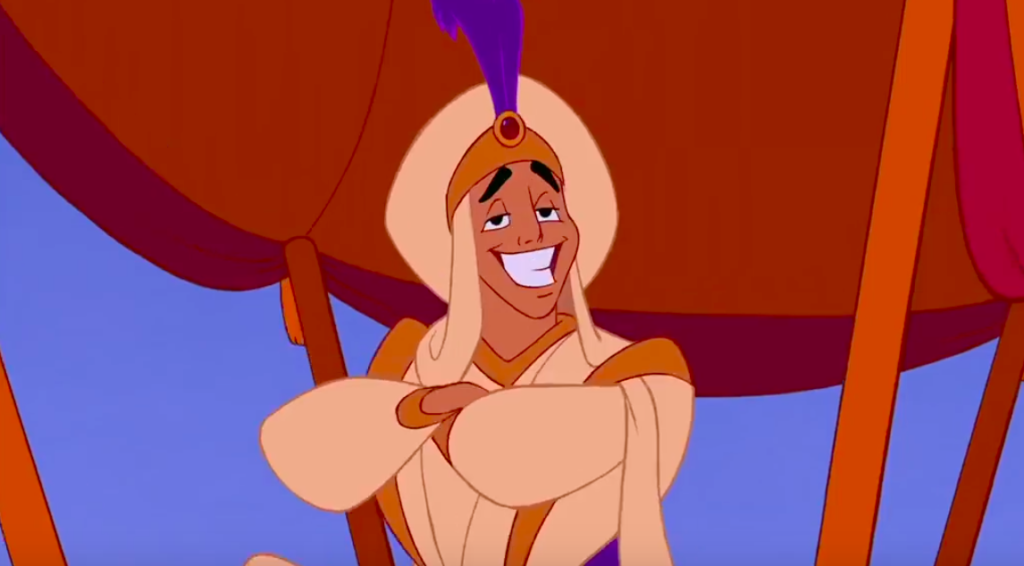 A still from the film Aladdin.

Louisville Fringe Festival
Various locations
$5  |  Times vary
It’s the second week of the 11-day Louisville Fringe Festival, a collection of independent, theatrical shows featuring such figments of the imagination as robot Shakespeare and “verbally abusive angels.” Today, catch the “Stoner Morning Show! At Night!” — a group of comedians portraying stoner stereotypes running their own morning show. On Wednesday and Friday, Climate Change Theatre Action presents an evening of short plays and poems centered around the current climate crisis called “Pollution, Whale Songs, and Other Dinner Table Talk.” And, on Thursday and Friday, storyteller Dawn Larsen recounts the “funny and not-so-funny-at-the-time” tales of a progressive woman who is dating in the Deep South.

KMAC Poetry Slam
KMAC Museum
Free  |  6:45-9 p.m.
Local poets speak their truth aloud in this poetry slam competition hosted by Lance G. Newman II. Ten will perform before a panel of judges. See who wins this month. This event is free to watch, but $7 to compete.

Sports Betting and Horse Racing
Ekstrom Library, UofL
Free  |  5:30-7 p.m.
Now that Andy Breshear is the governor-elect of Kentucky, there’s a shard of hope for legalized sports gambling in Kentucky. How might that impact our state’s tradition of betting on the ponies? State Rep. Adam Koenig, Bill Knauf, vice president of business operations at Monmouth Park Racetrack and John Walsh, assistant general manager at Hawthorne Race Course, think that it could benefit the industry, and they’ll be discussing why at this panel. Registration is required. Email [email protected] for a free ticket.

Games on Tap
Mile Wide Beer Co.
Free  |  6:30-11 p.m.
Gather ‘round for a lively evening of board games and brews at this weekly meet-up. The folks with Games on Tap will bring their own collection of 50 games, but feel free to bring your own. Expect family-friendly games such as Telestrations and newfangled ones, such as Codenames. This week, $1 from each beer sale will be donated to the Boys and Girls Club as part of a partnership with the Optimist Club of Louisville.

Art Pop-up and Coloring Night with Sarah Tidwell
V-Grits
No cover  |  6-8 p.m.
Come color at V-Grits/False Idol, using sheets from artist Sarah Tidwell. She’ll also be selling some of her work — $10, individualized pet portraits. Round out the evening with a beer or vegan meal.

Public Meeting – Beargrass Creek
Girl Scouts of Kentuckiana
Free  |  6-8:30 p.m.
Here’s another chance to weigh in on what should happen with Beargrass Creek, and this time, the Louisville Metropolitan Sewer District has money to help restore the watershed — $1.5 million from the U.S. Army Corps of Engineers for a study. Come and weigh in on what you would like to see happen.

Alanna Nash & Will Oldham in Conversation
Main Library, Louisville Free Public Library
Free  |  7-8:30 p.m.
Veteran music journalist Alanna Nash and venerable singer-songwriter Will Oldham are set to have a long-form, onstage conversation about their respective long and storied careers, as well as their mutual love of music. This event also takes place on the day that Will Oldham’s latest Bonnie “Prince” Billy record, I Made A Place, is being released, so we imagine that they’ll be talking about that, as well. If you’re a music nerd that relishes interesting insight and evocative storytelling, this event is for you. This event is free, but registration is required. Call 574-1623 or register online here.

Disney Trivia
World of Beer
Free  |  7-9 p.m.
Watch all the movies you have access to, because this Disney Trivia will be based on the sample questions organizers give. Do you know what extreme fear Bernard from “The Rescuers” has? (Answer: triskaidekaphobia). Flex your knowledge while sipping Disney-themed cocktails. Your prizes are gift cards for first, second and third place winners, as well as whoever shows up in the best Disney costume. Organizers recommend getting there early to grab a spot.