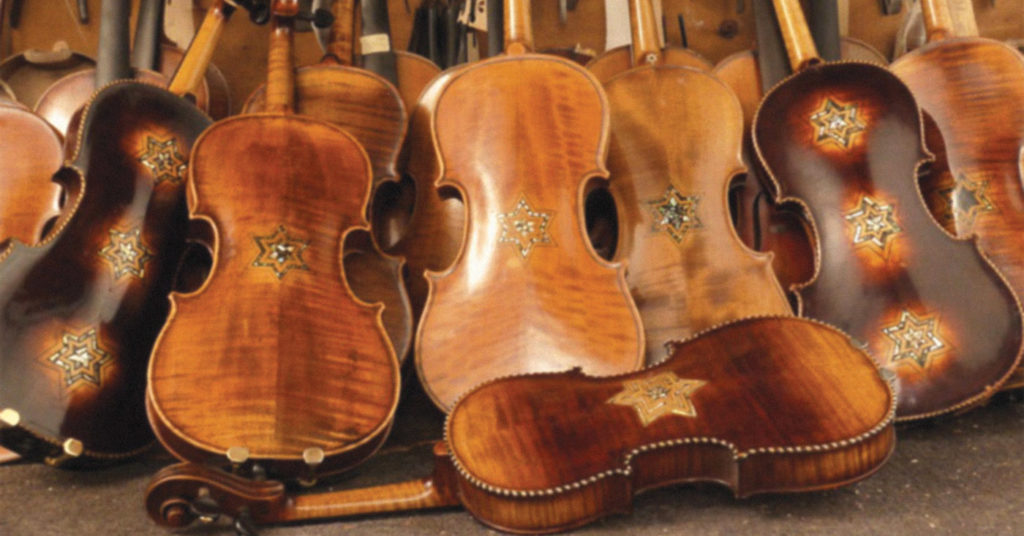 For two decades, Amnon Weinstein, an Israeli luthier, has been tracking down and restoring violins that were owned and played by Jewish musicians who were killed during the Holocaust.

Weinstein has now gathered and made whole more than 50 violins — instruments that survived the horrors their owners did not.

That collection — dubbed “Violins of Hope” — is now in Louisville as part of a community-wide initiative that is unprecedented in breadth and scope. Dozens of individuals, firms and organizations are credited on the event website. And, over the next 10 days, there will be public performances, presentations and displays at more than two dozen venues — not counting more than a dozen events that will take place in schools across the entire Louisville Metro region.

Last week at a press event at the Frazier History Museum (where the instruments will be exhibited from Oct. 17-27 with no admission charge), Louisville Orchestra concertmaster Gabe Lefkowitz played two selections (“Andante” from Bach’s Violin Sonata No. 2 in A minor and the main theme from the film “Schindler’s List”). These are grave and beautiful pieces, and a listener might naturally think of these violins as instruments haunted by their legacy.

But, for Jeff Jamner, these instruments resonate with the sounds of hope and grace and the power and beauty of the human spirit.

Jamner serves as senior director of education and community at The Kentucky Center, one of the collaborative partners. Both parents survived the Holocaust. His father was among the German children who escaped to England in the Kindertransport (“children’s transport”) during the months between Kristallnacht and the start of World War II. His mother, born in Poland, survived the Auschwitz concentration and extermination camp.

“I feel that I’ve grown up with two legacies,” Jamner said in a phone interview. “One is the love of classical music, a very deep love which they and I have shared, as well as the shadow of the Holocaust and the experience of renewal and rebuilding and starting life anew after that trauma.”

For Jamner, the importance of projects such as “Violins of Hope” is that the arts have the power not only to bring the past to vivid life but to give people new ways to process history and think about the future.

“By studying the Holocaust and other genocides,” he said, “we come into reckoning with the degrees of man’s inhumanity to our fellow people and we can use the arts to think about our future and the kind of world we want to create.”

That’s important for everyone, says Jamner, but it’s an especially crucial matter for children and the educators who work with them.

And at a moment when our political discourse is defined by polarizing strife, Jamner said, music is a force that can transcend ideological barriers and bring us together. He noted that although the instruments preserved by the “Violins of Hope” project were owned and played by Jews, the music that was — and is — performed on them is part of a shared human heritage that has never been bound by geographical or political borderlines.

For Jamner, that shared heritage is both universal and deeply personal. He’ll be telling his stories at a free, interfaith program sponsored by The Center for Interfaith Relations and the Jewish Federation of Louisville at the Cathedral of the Assumption, Tuesday, Oct. 22, 7 p.m. The program will feature three speakers (Jamner, Nasra Hussein, a Muslim Somali-American youth and Christian educator Fred Whittaker). A selection from the Violins of Hope collection will be on display and will be played in performances featuring Grammy Award-winning violin virtuoso Johnny Gandelsman.

The enormous scope of the Violins of Hope project is such that you need only find a convenient date and location to take part.

In Indiana, the NouLou Chamber Players and Louisville Youth Orchestra perform at the IU Southeast Ogle Center at 7:30 p.m. Saturday, Oct. 19. Registration is required at oglecenter.com

The Main Branch of the Louisville Free Public Library hosts a presentation and performance at noon Friday, Oct. 18. Registration is required: 574-1623.

The Bunbury-ShPIeL Identity Theatre Project hosts a reading from Arthur Miller’s “Playing for Time” (based on the memoir of Fania Fénelon, a member of the Women’s Orchestra of Auschwitz) at 4 p.m. Friday, Oct. 18. Register at: bunburytheatre.org.

The Louisville Orchestra will feature instruments from the collection in its concerts at The Kentucky Center on Friday, Oct. 25-26. For more information: kentuckycenter.org/all-shows/violins-of-hope or 584-7777. •