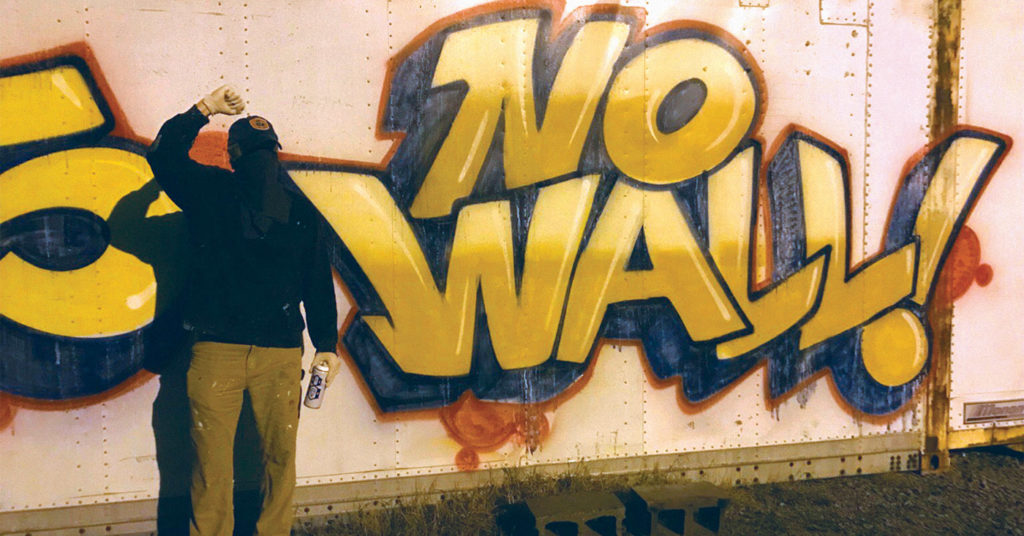 First came messages of “Resist 45” painted on billboards and highway overpasses, just after the Trump election, and then paint was splashed onto the statue of former Confederate John B. Castleman.

Most recently, “Crazy Bernie Sucks” was painted on an Interstate 64 overpass as he visited the city.

Josh White, a graffiti abatement advocate, told people at a forum on vandalism Oct. 12 that he believes political graffiti writers are emboldened by what he described as the city’s generally lax response to graffiti.

“No one’s doing anything about it so they know they can get away with it,” said White, who leads the Graffiti Abatement Coalition, a volunteer group devoted to stopping the spread of graffiti in Louisville.

“All the political messages are always covered and some of them really rapidly,” said the writer, who spoke with LEO on the condition of anonymity. His motivation is purely political and not about self-promotion or seeking notoriety. “I’ve got a message about what I think’s wrong, something people need to be aware of,” he said.

Political graffiti, specifically involving the Castleman statue, was the initial inspiration for the forum at Gilda’s Club Kentuckiana on Grinstead Drive.

Steve Wiser, an architect and historian, is a member of Friends of Louisville Public Art, one of the groups that arranged the forum to discuss vandalism including the Castleman graffiti. His organization is appealing the city’s decision to remove the bronze of Castleman because they say he was progressive for his time on racial issues and had recanted his Confederate service.

But, the more Wiser thought about graffiti, and vandalism in general, the more he realized it’s a problem across Louisville.

“You just see it everywhere,” Wiser told LEO, listing graffiti he’s seen on the interstate and along Bardstown Road, including cars belonging to two of his friends, which were recently painted.

Another recent instance of graffiti that made headlines was the defacement of new bus seats in The Highlands, fashioned out of former Cardinal Stadium seats. Metro Parks also has reported smashed bathrooms and uprooted trees.

Wiser and others at the forum felt that graffiti has been increasing in Louisville recently. Yet, city records show reports of graffiti have decreased. In fiscal year 2018, there were 952 recorded cases of property violations that included a “defacement of property” citation. (Defacement of property is a category that primarily includes graffiti). In fiscal year 2019, which ended in June, that number dropped to 751.

Forum moderator Rachel Platt asked the audience at Gilda’s Club if anyone had ever been a victim of graffiti. Many of the 30 or so people who attended raised their hands. The same thing happened when Platt asked if they were frustrated with vandalism.

But, when she asked the audience if they thought the city was doing enough to address the problem, no hands went up.

This was in contradiction with what one of the panelists, Councilwoman Barbara Sexton Smith, said at the beginning of the forum.

“Do we give vandalism, and crime in general, the attention it deserves?” she asked. “My quick answer is absolutely yes.”

Sexton Smith added that, despite this, the city cannot solve all of Louisville’s problems.

The city’s Department of Codes & Regulations maintains a two-person crew that cleans up graffiti on public property, aiming to rid the surface of graffiti within 30 days, or 24 to 48 hours if the graffiti contains a vulgarity or is hate speech, Robert Kirchdorfer, director of the department, told LEO. Kirchdorfer was not at the forum Oct. 12.

But, private property owners are responsible for fixing damage done to their own buildings. They’re cited by code enforcement officers, who either spot the graffiti themselves or receive a complaint from Metro 311, the city’s online and phone reporting system for resident-spotted property code violations. Typically, property owners have 10 to 30 days to fix the issue, after which they could be fined.

Louisville police investigate complaints about vandalism. At the forum, panelist Bridgit Hallahan, commander for Louisville Metro Police Department’s Fifth Division, which includes The Highlands, said that vandalism is on the force’s list of priorities, although it’s not at the top. It depends on the area and what else is going on at the time, too.

“In this division, we don’t have the same issues as other divisions do, so we can dedicate, depending on what’s going on in the moment, dedicate more time to looking into certain issues such as vandalism,” she said.

Shaun Spencer, a panelist and president of the West Louisville Dream Team, said that she’s called Metro 311 to report property violations, but that, in one case of a jagged curb, it hasn’t been fixed — even though she called four months ago.

When other residents see vandalism in the neighborhood, it gives them permission to react with more vandalism, she said. This concept  has a name: the broken windows theory. “It spreads — the cancer,” Spencer said. “Does it matter if I damage the house next to it, because this one’s already damaged?”

White said other cities take measures to combat graffiti that Louisville does not. His suggestions for the city are to:

—Devote a page of the city’s website to graffiti and how property owners should address it.

—Hire a director of graffiti abatement.

—Teach the difference between graffiti art and vandalism in schools.

—Form an advisory committee on graffiti with budget control, made up of representatives from code enforcement, public works, LMPD and someone who manages public facilities, with the intention to meet monthly.

Sexton Smith wrote down White’s suggestions as he spoke, taking special note of his idea for an advisory committee. “To me, that is very reasonable, and it could be facilitated easily in my mind,” she said.

The other panelists, including Metro Council President David James, Assistant Director of Metro Parks Mesude Ozyurekoglu and Matt Taylor, who works in economic development within West Louisville, advocated for other solutions:

—Teaching children about vandalism and respecting other people’s property, both in the home and in community centers;

—Working together across socioeconomic lines.

—More promotion of Metro 311 and other reporting apps, possibly connecting those apps to an online, interactive map of the city.

The forum finished with Sexton Smith asking White to arrange a meeting with the people he’d like to see on an advisory board.

Wiser left the meeting feeling positive about the forum and its potential impact. “We really got a good cross section of the community here, and that was a good thing to come out of this,” he said. “Who knew we were all talking about it individually, and now, we’re getting all together.” •