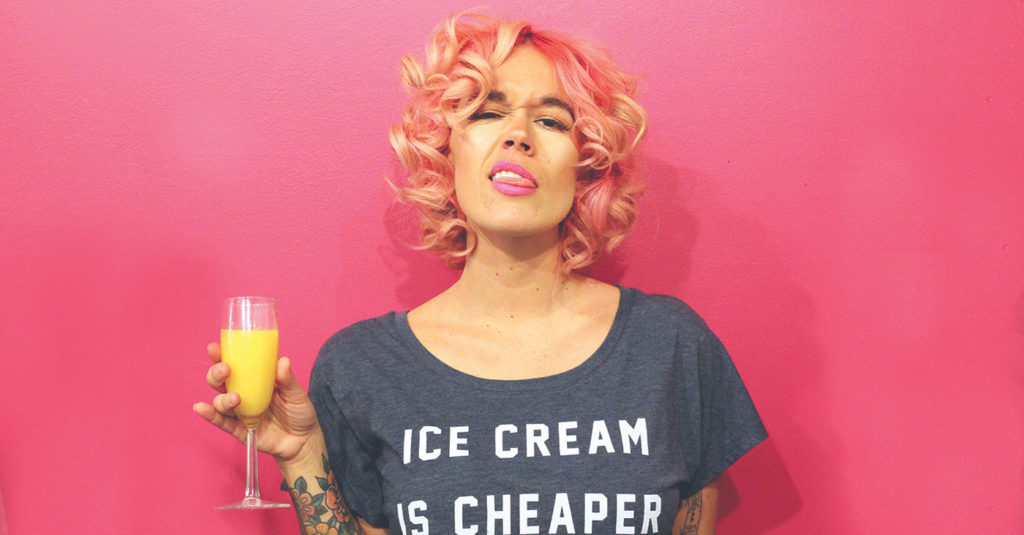 Nicole Stipp and Kaitlyn Soligan Owens have lovingly referred to their baby, Trouble Bar, as the “Rainbow Palace of Whiskey Dreams,” and, in truth, it’s not hard to see why. Upon entering, you step into the historic bones of the Shelby Park building and into an envelopment of floor-to-ceiling exposed brick, and while the furniture and minimal art isn’t exactly the embodiment of “rainbow,” it’s the essence and the light that make you feel it. Slink down into one of the tufted, camel-hued couches with a comrade, whiskey in hand, and at almost any hour of daylight, the sun flickers off the Scarlet’s Bakery mural across the way, as if that mural was created solely as a tapestry for Trouble Bar’s large windows facing Shelby Street. Swirls of blue and pink from the mural dance in the light and bounce off the carefully-curated glasses (chosen specifically to fit a nose for a whiff, mind you), and I can’t say if it has been the whiskey talking, but on more than one occasion, I tell you, I’ve seen a sparkle glimmer in the air. Stipp and Soligan Owens have known one another for over 13 years, from working in politics and playing on kickball teams in D.C. to women’s development in rural Rwanda to bourbon tourism through their company, Matson & Gilman, and now, Trouble Bar. They have a truly inseparable bond. Through it all, they know one thing is for certain, and it comes from a saying they picked up on their travels. “Bohoro bohoro,” slow down and you’ll get there eventually.

Stipp and Soligan Owens have been creating custom bourbon tours and classes for “bourbon lovers and the bourbon-curious” for three years now with Matson & Gilman, and when they stumbled upon the space that is now Trouble Bar, the women were simply in search of an epicenter for their celebrations of our native amber elixir — i.e., an office space, storage for all their whiskey, a meetup point for their tours and potentially more. They both firmly believed that Louisville didn’t need just another bar, but, while Stipp took Soligan Owens on a FaceTime tour of the space while she was in New England for the holidays, they couldn’t help but ask each other, “what if we expanded this dream?” They’d known and now worked together for over a decade. They’d created a tourism company. They’d been through their share of hardships and made it to this very moment. They found a “build to suit” space in a neighborhood that deserved this kind of presence. “We’ve made ourselves unbreakable,” said Soligan-Owens, and just like the sprawling mural on the side of their building reads, whiskey made them do it.

Stipp and Soligan Owens knew their business expansion — whether it was a large office, event space or, now, all those things and a bar — likely wouldn’t be on Main Street with the rest of much of the bourbon community. When they found their current space that Soligan Owens said was “essentially a bombed-out shelter” before their remodel, they knew their dream could thrive there. “Shelby Park needs and deserves this kind of presence,” she said. “This is the part of Louisville we haven’t been able to show our (tourism) clients.” In talking about Shelby Park as their new home, a friend of the women brought up retail. Soligan Owens said that retail generally comes after food and beverage. Said Stipp: “Our aim is to have a slow, affordable build and bring something in that doesn’t price out the neighborhood, but gives them a space that they can come in and consider their living room, and that’s why we have $4 beers.” Trouble Bar joins Red Top Hotdogs, a remodel of T. Eddies Bar & Grill and the soon-to-open Logan Street Market as exciting additions to the community.

In addition to its beer specials, Trouble Bar boasts an impressive but approachable bourbon list, curated flight selections all named after friends/family/bourbon industry inspo, a cocktail menu and an affordable but interesting wine list thanks to Stipp’s vision of carrying “not-grocery store wine.” I tasted the delightful libation named after fellow LEO advice columnist, Minda Honey, “The Storyteller,” at Trouble at the Planned Parenthood Gala official after party — Old Bardstown Bottled In Bond, spicy hibiscus honey and lime juice. Beautiful and bold with some sweet heat, just like Minda. If you’re served one of their flights, don’t be intimidated. Stipp will hand it to you on a large, clear tray covered in a myriad of neat pours plucked with clothespins, water and ice, and you may think, “What have I gotten myself into?” Lucky you (and, all of us), the bartenders are trained as certified bourbon stewards for this very moment, to “Sherpa” you through the experience. So, sit back, relax, think “Bohoro Bohoro” and transcend into the glow that is the Rainbow Palace of Whiskey Dreams. •