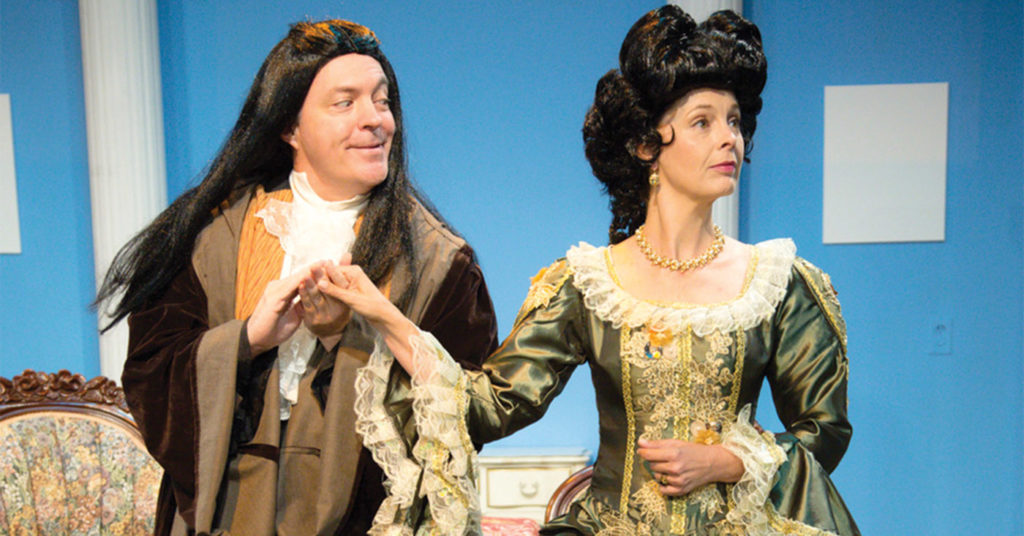 Saucy romantic comedies that bubble over with frisky dialogue, seductions, lovers’ spats and seditiously funny pokes at the hypocrisies of patriarchal authoritarian culture have long been staples of American community theater.

But, oddly enough, one of the greatest such comedies is rarely staged anywhere outside of academic settings — let alone in community theaters.

It’s a play so notorious that in its time the king of France banned public performances, and the archbishop of Paris threatened to excommunicate anyone who watched, performed or even read it.

The play is Molière’s “Tartuffe,” from 1664. The history of Louisville theater productions isn’t well documented, but as far as I can tell, there hasn’t been a single nonacademic production of “Tartuffe” in Louisville during this century.

That’s a shame. It is a delicious story that sets the standard for using humor to combat charlatans, hypocrites, frauds and sexists. So it is always timely. And especially now.

Still, a 17th century French comedy is a challenge for any company.

But Shelby County Community Theatre has taken it up. And their production, which opened last weekend, is bracing, bold and deliciously fun from start to finish. I dislike comparing companies with one another, but I will — just in case you’re wondering whether it’s worth, say, driving from Louisville to Shelbyville.

Shelby County’s “Tartuffe” is at the level I expect from Kentucky Shakespeare productions. The pace and flow are superb. The performances are vividly drawn and confident.

The company is using the award-winning translation by Richard Wilbur (whose honors include a Pulitzer Prize, a National Book Award and a stint as U.S. Poet Laureate). Wilbur translated the original French into heroic couplets — rhymed couplets in iambic pentameter.

It’s a script filled with complex fireworks, and this company’s ability to convey the music of Wilbur’s language while rendering the meaning with crystal clarity is a complete delight.

The level of individual virtuosity is outstanding across the entire cast. But, more importantly, this script demands lots of verbal athletics. Often, the opening leg of a rhyme starts with one character and bounces to another for the finish (often with devastatingly comic effect). Always, the dialogue insists on fast-paced volleys of sound and sense.

This script demands individual virtuosity, of course, but also it requires bouncy verbal teamwork. There are key moments when one character’s speech ends on the first leg of a rhyme, and another character’s reply completes the rhyme — often to ironic effect. Under the direction of Jack Wann, the company zings through all these challenges with a delightful weightless grace.

The plot revolves around a cynical, hypocritical cleric named Tartuffe (Jeff Schilling, whose sallow complexion and countenance bring the part to life) who ingratiates himself into the household of the wealthy, gullible Orgon (played with affable pomp by Ken Billings). Tartuffe fools some of the folks in the household. Orgnon’s bombastic, moralizing mother (wonderfully portrayed by Shelly Marquart Reid) is especially smitten with his veneer of spirituality.

But others are more skeptical, none more so than Dorine, an independent-minded lady’s maid played with uninhibited vigor by Brooke Noelle Spatol.

Dorine is the servant of Orgon’s daughter Mariane (Emma Lambert), who is betrothed to Valere (Lucas Bentley). But when Orgon decides to break off his daughter’s engagement and give her to Tartuffe, the plan sparks a rebellious conspiracy among the young lovers, Orgon’s son Damis (Maximilian Valentine) and brother-in-law Cleante (Stephen Taylor). Leading the charge is Orgon’s wife Elmire, whose plan to entrap Tartuffe plays out in a classic comic scene.

Other small but vivid performances come from Tom Johnson as the bailiff, M. Loyal, Sam Borders as a King’s Messenger and Kennedy Gill as a Lady’s Maid. A fine set in the company’s intimate Upstairs at 801 space and great costumes and wigs by Gramig, Lambert and Leigh Anne Barcellona give the play a fine period polish. •

Actors Theatre of Louisville’s “Solo Mio” series, presented by its Professional Training Company, always strives for biting relevance, and round two of this year’s series seemed to have a theme: revolution.

In “Pronto Llegará” performed by Kat Peña, we watch a young immigrant girl separated from her mother become a senator determined to take action and change the destructive immigration policy… all in a span of seven minutes. In “A Brief History of Francois Le Chou Chou,” Noah Keyishian introduces us to a fictional revolutionary owning up to one of his more embarrassing moments. In “O Ezili!”, Kaitlyn Boyer portrays a woman during the Haitian Revolution rallying the people and calling on Ezili to help overthrow her oppressors.

Other performances, while less outright, focused on challenging oppression and taking action. In “Here Before God,” Gabriela Llarena powerfully asks God to confess his sins in the face of a world where women aren’t safe. A congressman played by Isaiah J. Williams in “Without Work” looks back on his lack of action in response to mass shootings, having only responded with “thoughts and prayers.”

Alex Might’s “Never, Ever, Ever, Under Any Circumstances, Say ‘I’ll Be Right Back’” offers comic relief as a scary movie fan gets a little too wrapped up in the horror, but still coming back with a favorite pillow and some popcorn.

The lobby display, a staple of “Solo Mios,” added food for thought, with inspiration pieces for each performance as well as two sticky note boards asking for audience input. One asked: “If you could change anything about the world, what would it be?”

The other asked what words stuck out in the mind of the audience. One answer that was repeatedly given was “action.” —Alex Roma •