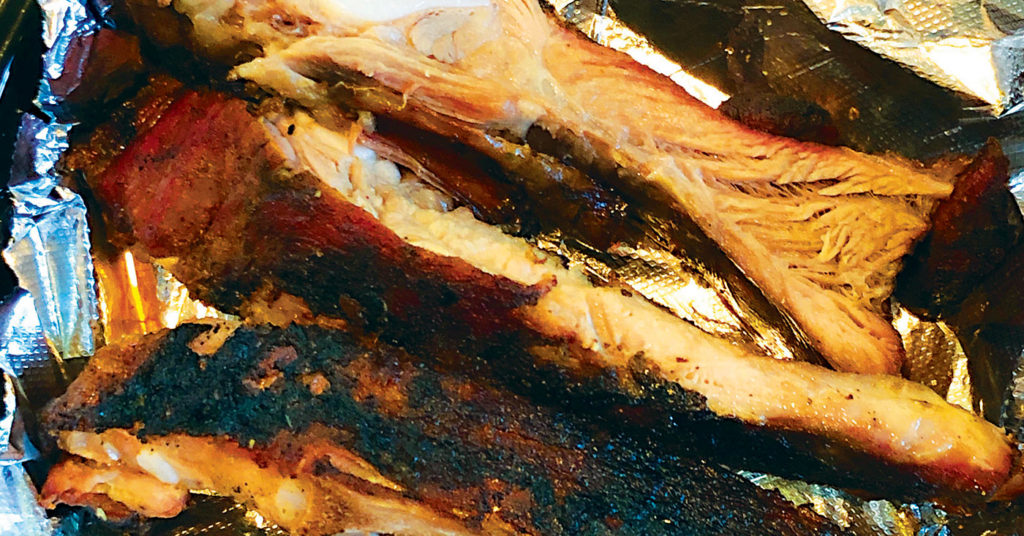 Shirley Mae smoked these meaty pork ribs on big black grills on the sidewalk out front.

Soul food and soul music go back to the ‘50s and ‘60s when the civil rights movement burst into the national conscience and with it “black power” and “black pride.” Shirley Mae’s came along a bit later, in 1988, but this Smoketown landmark remains as one of the best places in Louisville to enjoy seriously good soul food.

The full name of the place is Shirley Mae’s Cafe & Bar, and there’s no denying the bar component. A long, black bar with a row of a dozen stools lines one side of the narrow room. There’s a row of tables along a banquette on the other side. You’ll probably get a happy wave from Shirley Mae cooking in the open kitchen, sitting on her Rollator walker at the flat-top grill; and you’ll definitely get a warm welcome from the friendly service folks.

The menu covers the soul food genre nicely, and its pricing falls on the low side of affordable: in other words, cheap. Seven of the nine entrées are $5, and that’s for a generous portion of such soul-food goodies as pan-fried tilapia, meatloaf and even a ham hock or a pig foot. Only spare ribs ($6) and chitterlings ($9) break the $5 barrier, and that’s fair: Ribs need long smoking, and have you ever tried to clean a chitlin’?

Ten sides go for a thrifty $3 each; two pieces of Shirley Mae’s “world famous hot water cornbread” go for just $1, and I can tell you that you’re going to want more than two.

Come for lunch before 3:30 p.m. and grab an even better deal: $10 gets you an entrée, two sides and cornbread.

Shirley Mae’s popular baked chicken with cornbread dressing ($7) is available Sundays only. Classic soul food desserts range from $3 (for banana pudding) to $6 (for pecan pie). Even the bar is among the most affordable around, with domestic and imported beers for $2 to $3, everything on a short wine list for $3 and mixed drinks from $5 to $7.

Joined by our friend Ann so we could try more goodies, we came for Saturday lunch and had no trouble claiming a table, but the room filled up as we enjoyed our meal.

Among us we tried a pork chop, a brace of chicken wings, an order of smoked pork ribs and a bunch of sides. We’d have gladly added some banana pudding, lemon pie and pecan pie, but it was too early in the day for Shirley Mae, who said she was worn out after a very busy Friday night at the cafe.

The meats were all prepared simply and well in soul food style.

Four wings were jumbo indeed ­— our server told us we’d probably take two home, and he was right. They were naturally tender and not only large but generously cut to include a chunk of white breast meat at the joint. They were fried crisp in a flour-based breading and not at all greasy, still on the light side of golden brown.

The pork chop was chicken fried in the same kind of coating as were the wings, adding crunchy texture to flavorful, pale-color pork with a good, firm texture.

An order of ribs yielded three, large, meaty bones, grilled to crisp browned edges and a firm, meaty texture. We ordered sauce on the side because you never know, but it proved to be a good, spicy and smoky tomato-based concoction that wouldn’t have done the ribs any harm at all.

Every side was estimable. Mashed potatoes were made fresh with a few, tiny, telltale lumps to let you know they were mashed the old-fashioned way. They were drizzled with thick, rich and tasty, pale brown gravy. Turnip greens were cooked simply, without fancy seasoning, and there was a chunk of fatback in our bowl. Cabbage was simmered until tender, not cooked into oblivion. Fresh corn niblets fried in butter? Yes, please! Hot water cornbread is fried, too: Simple white cornmeal, no sugar, is fried in a shattering crisp shell like a giant hush puppy, only much more appealing.

Noise level: A pleasant but not ear-shattering buzz didn’t interfere with conversation at Saturday lunch. (Average sound was 75 decibels, the level of normal conversation, with occasional bursts to 85 decibels.)

Accessibility: A single step at the entrance bars independent access for wheelchair users. The restroom has basic accessibility features, but getting to the men’s requires negotiating a narrow, turning corridor.