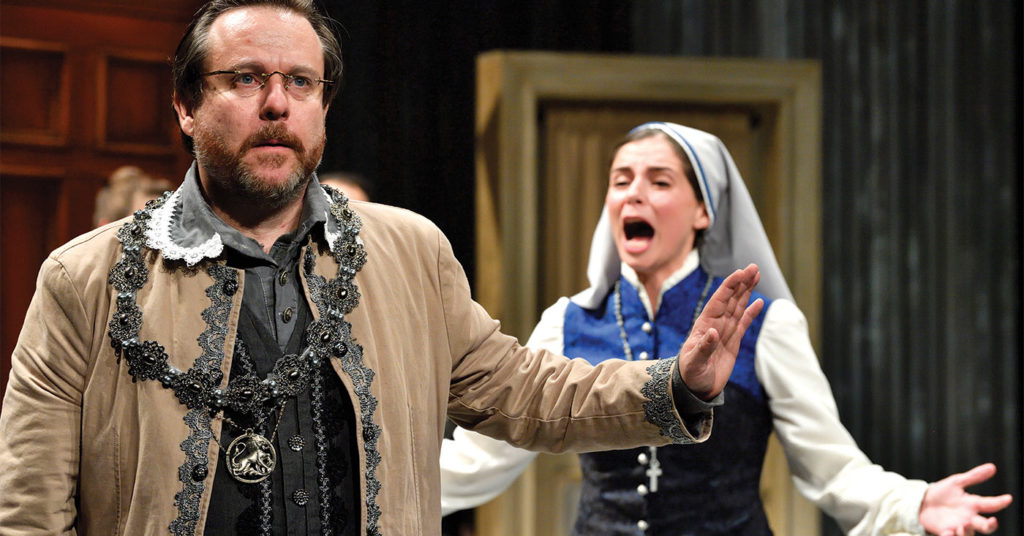 Nearly six years ago, Fiasco Theater in New York opened a celebrated production of “Measure for Measure” that breathed 21st century life into the classic Shakespeare play. Its production garnered national reviews and was such a success that Noah Brody and Ben Steinfield, now co-artistic directors at Fiasco, have decided to bring the show to Actors Theatre of Louisville.

Most of Shakespeare’s comedies leave something a little unsettling underneath the laughter and marriage proposals. In no other play is this more true than “Measure for Measure,” a story about a novice nun presented with a cruel ultimatum: her brother’s execution or her virginity given up to the authority figure who placed him in prison.

While the heroine Isabella’s (Stephanie Machado) insistence that to give up her virginity would damn her soul now seems old-fashioned and harsh to say the least, the real issue of consent is all too relatable in 2019. Angelo (Paul L. Coffey), the deputy ruling Vienna in the Duke’s absence who cracks down on sex work and fornication while propositioning Isabella, believes that because he wants her, he should have her. In the soliloquy, after he realizes his attraction for her, he finds himself wondering, “Is this her fault?” resulting in a few knowing mutters from women in the audience.

Later, when Isabella threatens to expose his hypocrisy, his words, “Who will believe you?” echo hauntingly through the theater.

Even the kinder Duke (Devin E. Haqq), who helps Isabella out of the sticky situation, still feels a sense of entitlement to her love. All Isabella wants is to become a nun, but this matters little to the men in her world. Perhaps because of this or perhaps because of the real-life power of solidarity, her most compelling relationship in the play is her growing friendship with Mariana (Jessica Wortham), a spurned lover of Angelo’s who has her own reasons for wanting him to be held accountable.

Despite these heavy themes, Fiasco Theater’s production shined with charm and humor in its characterizations. A cast of six covered 13 characters: Machado played both the chaste Isabella and the bawd Mistress Overdone, filling the latter with energy and a delightfully cartoonish accent. When Coffey wasn’t playing the villain of the play, he played Elbow, a hilariously incompetent constable in the vein of Dogberry from “Much Ado About Nothing.” Matt Dallal covers both Isabella’s brother Claudio, sentenced to death for impregnating his long-time lover, and Pompey, a pimp who proudly flaunts his lascivious lifestyle. Even the singing chorus that forms the transition between occasional scenes adds subtle humor beyond even the wit of the script.

In fact, the transitions between scenes were another element handled expertly by this production. The primary set pieces were five, detached doors. On the benches behind the doors, we could see actors sitting or altering their costumes as they waited for their next cues. In between scenes, rather than bringing the lights down for stagehands to move set pieces, we were greeted to a whirl of activity, actors circling the stage, ad-libbing occasionally based on their character’s current frame of mind until the dust settled on the new scene.

The ending falls just short of justice, as most of the comedies do. Angelo is forgiven, characters thought to be dead are returned to life and clever schemes are revealed. As Isabella — at the urging of Mariana — bent her knee to plead for Angelo, there was a thick sense of disappointment in the air. However, more than any other Shakespeare comedy, it felt as though this ending was meant to be disturbing, whether through intention of the bard himself or of Fiasco Theater. The sudden proposal from the Duke, too, lands somewhat uncomfortably, and it’s fitting that we never see Isabella’s answer, but the lights go down as she looks away from the Duke and toward the audience with a troubled expression. •

Midway through Bunbury Theatre Co.’s razor-sharp production of Cormac McCarthy’s play “The Sunset Limited,” it suddenly occurred to me that the play could be viewed as a strange and wonderful example of what might have happened if Frank Capra of “It’s A Wonderful Life” had ever collaborated with Samuel Beckett of “Waiting for Godot.”

Afterwards, I did a bit of googling and discovered that — alas — I’m not the first to make that leap.

It’s not exactly a mainstream critical take, but I stand by it. Though he’s known for his novels (and film adaptations thereof), “Sunset” suggests that McCarthy’s rigorous, virtuosic thought and writing could have translated to great drama had he pursued the form.

“Sunset” begins shortly after a fellow named Black (Clyde Tyrone Harper) has forcefully prevented a professor named White (J. Barrett Cooper) from hurling himself in front of the train that lends the play its name. The characters are named for their skin color, but their fiery, 90-minute dialogue — all of which takes place across a kitchen table in Steve Woodring’s fine set — plays out as a verbal chess match between the faith-based, ex-con Black and the atheistic intellectual White.

This is a rough, riveting, high-stakes debate about whether life is worth living. It’s furious and funny and forceful. I’ve seen the film version (with Tommy Lee Jones and Samuel L. Jackson) and this production, directed by Woodring, felt more urgent, more immediate, more engrossing.