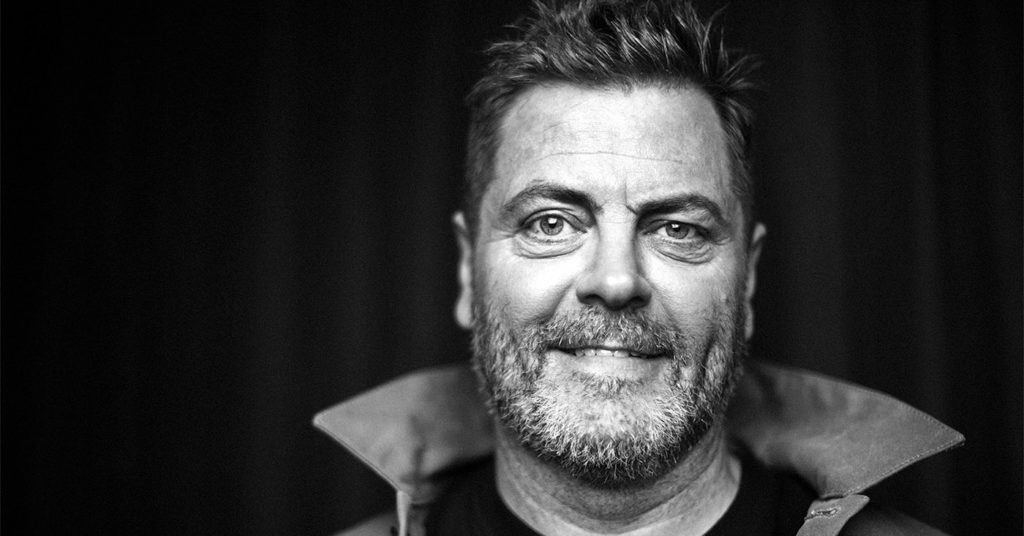 Photo by Matt Winkelmeyer/Contour by Getty Images for SXSW

Nick Offerman has transcended the role of actor and comedian to become an icon in modern pop culture. Yet, even Offerman is unsure why he is so popular: “I can only imagine it must be my cheekbones or my incredibly symmetric bone structure.” See for yourself when he brings his All Rise Tour to The Louisville Palace next week.

LEO: You’ve been through Louisville before. What was your first impression of our bourbon-soaked little town?
Nick Offerman: I managed to get to Louisville well after I embarrassed myself on bourbon in Illinois and California. So, you didn’t get me on that one. Louisville has always been kind of a fairy tale for me because I’m a huge fan of the writer Wendell Berry. I always knew coming to Louisville I was getting close to Henry County, which is where The Berry Center is set up and a lot of his fiction is set. I found the area suitably human, charming and charismatic in all the right ways. Good looking in all the right ways but also filled with just enough mischief.

Tell me a little about the idea behind the All Rise Tour?
Well, I felt like the people in our country were suffering from a general malaise having to do with the incredible indecency that has taken over our politics. We’ve always known that politics has been rife with sinful natures, but for some reason, they decided to turn it up to 11 the past few years. I don’t think I’m smart enough to fully wrap my head around that situation, but I can successfully poke fun at us as one big group of people, without taking sides, forgetting ourselves in this mess that we’re in. I mean, we’ve got a few assholes that are participating that are too amazing at it to be left uncelebrated. But for the most part, the show is making fun of all of us equally.

What is the one thing we can do collectively to right the ship?
The first thing I would suggest is for everyone to get off their rear ends and realize there never will be one thing. We’ll always be a group of human beings, which means we’ll always be problematic. The one general thing is that people are going to have to start paying attention, which ultimately means voting. I was guilty of it for many years. The American complacency. Thinking, the air conditioning is still on, and I can get gas at the gas station, so I believe everybody has everything in order. It doesn’t take much homework to realize that some people are taking us to the cleaners and acting in ways I would consider very un-American.

You have become a sort of blue-collar, pop culture folk hero, kind of like Bruce Springsteen. Why do you think fans have responded to your work the way that they have?
Probably, just as is the case with Mr. Springsteen — it’s because I’m so damned cute. I don’t know. I guess one answer is that I’m the beneficiary of a lot of brilliant writing thanks to the ‘Parks and Recreation’ writers. Beyond that, I can only imagine it must be my cheekbones or my incredibly symmetric bone structure.

What is it about a character like Ron Swanson that made audiences cling to him?
I don’t know. I feel like one of the dilemmas our society is facing is an overabundance of information and choice. There are too many things to choose from. People have come to think of shopping as a pastime, like reading a book or building a table or walking in the woods. I think the character of Ron Swanson is sort of a Paul Bunyan, mythological icon — in that he lives his life very simply. He lives his life by a set of simple rules. I think that appeals to people these days. They want a parental figure to say, ‘No, you can only have three choices.’ Because it would save them so much time. If I think, ‘Oh shoot, I’m out of pencils’ — I go to get more pencils, and there’s 327 different pencils to choose from. Now, let me read the reviews — there’s 17 reviews on a pencil. Do I need a No. 2 pencil? Do I want an eraser? Ron’s appeal is that he’s the guy who just says, ‘Here’s the pen or pencil you need next.’ There’s something very comforting about living that simply. •