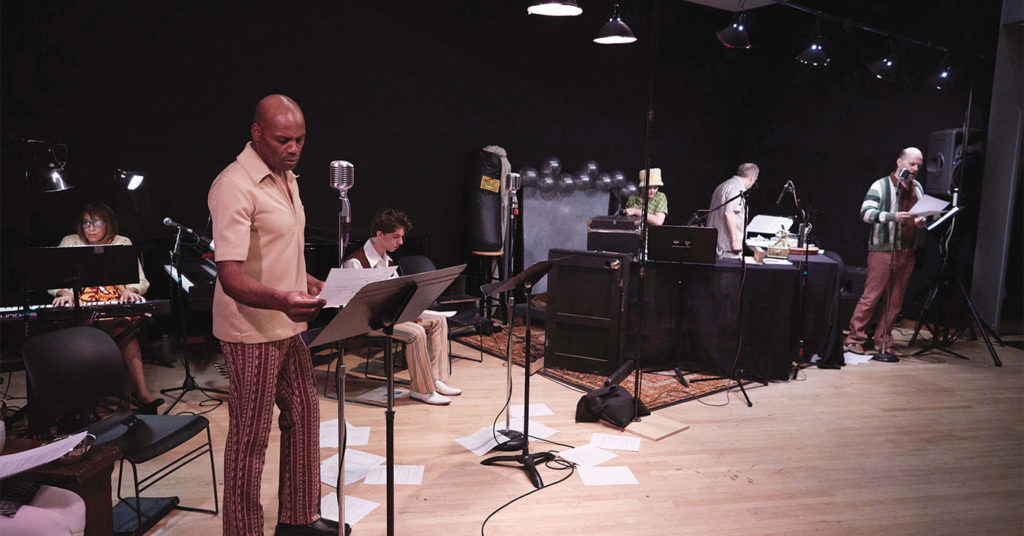 Following on last year’s “The War of the Worlds” broadcast, it seems that Kentucky Shakespeare has found a way to deliver chilling Halloween productions that stand out from the season — radio plays. This year, it returned to Louisville Public Media’s studios with not a recreation but its an adaptation of the 1968 movie “Night of the Living Dead.” Director Amy Attaway set about the task of adapting George A. Romero’s original script and in creating their own version, showed off what the Kentucky Shakespeare team could do.

Like last year, the show began with a pre-show musical performance by Laura Ellis and Gayle King, and like last year, they provided lounge music that was delightfully on theme. Think “Killing Me Softly With His Teeth,” or an easy listening cover of The Cranberries’ “Zombie” interspersed with corny zombie jokes from Ellis and exasperated reactions from King. This is one show in which it’s worth showing up early to catch the whole pre-show.

And Ellis was able to show off her acting chops this year, as well, playing both Barbara — the young woman who devolves into a near catatonic state after the loss of her brother in the first zombie attack of the show — and Judy, the sweet but short-lived fiance to the young Tom (Matt Street).

In addition to the charismatic energy she brought to both of these roles, she returned to the foley art and sound design, which is one of the elements that really sets these radio shows apart. But this year, she had help. In fact, much of the cast including Dathan Hooper and Jon Huffman joined in to create the various sound effects necessary, sometimes even as they acted. The cast as a whole also often came together to voice the hordes of zombies with terrifyingly ghoulish grunts and groans, often flitting between the sound of the zombies and the reactions of their characters.

Though as a radio play, the auditory aspect of the show is really the only part that’s necessary, there is something special about being in the audience and able to see the show being played out. The foley art, for one thing, is an interesting visual to contrast with the sounds that you hear. A crumpled piece of paper can become a flame and ridged, wooden percussions can create the sounds of ambient frogs. A popped balloon can become a gunshot. It’s also only through seeing the show that you can see the vibrant ‘60s costumes, designed by Donna Lawrence-Downs: knee-high, white boots, bright headbands and funky patterned pants.

The acting, however, is not wasted on facial expressions. That’s not to say that actors are blank faced as they speak expressively into the mics, but you won’t find those reactionary changes in expression or stance here, even from generally expressive actors such as Hooper, who plays the hero Ben, or Huffman, who plays the intolerably stubborn Harry Cooper. The voices, however, are enough. Hooper is commanding and comforting by turns and urgent throughout.

And much like the small cast came together to help with foley art, most actors handle vastly different voices to cover all the smaller but necessary roles beyond their principle parts. Abigail Bailey Maupin vocalizes a cool, collected phone operator as well as the frantic mother and frustrated wife, Helen Cooper. On opening night, even Kentucky Center for Investigative Reporting reporter Caitlin McGlade joined in on a few parts, adding a meta level to the performance.

Adapting what was originally a visual piece of media to a media that relies primarily on sound can be a challenge, and for “Night of the Living Dead” the solution was found in setting up a narrator to set the scene. Gregory Maupin handled the role with a grave tone and a perfect sense of drama. While most of the cast covered multiple characters, Maupin sticks mostly with the Narrator, breaking only occasionally to give voice to a TV newscaster — for all plot purposes, just another kind of narrator.

The story itself is as pulpy as the Romero movie, but it does include characters whom the audience can root for, especially Hooper’s Ben, Ellis’ Barbara and even Street’s Tom. The reason for the zombies’ existence is never explained, nor how easily they’re overcome in the morning. But there are thrilling scares as well as softer moments and at the end, a gut punch that stayed with me for days to come.

Whether Kentucky Shakespeare decides to make “Night of the Living Dead” a tradition in the way of “Dracula” or whether they choose another show, their first original adaptation of a cult movie turned radio play is a spooky success. •

‘Night of the Living Dead’