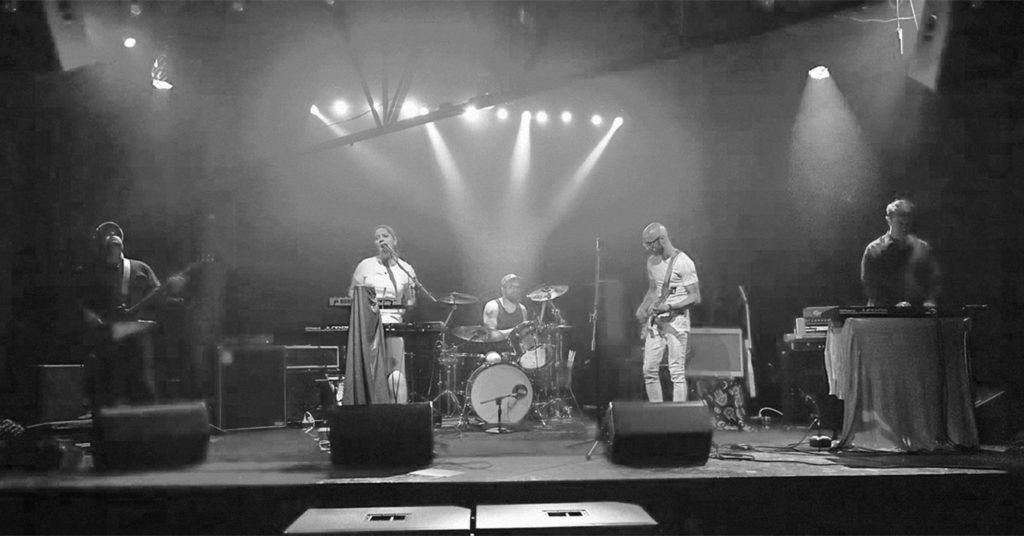 If you’re a band looking to make smooth, danceable new-wave, it’s hard to go wrong by borrowing some style from the legendary ‘80s musician Pete Godwin. And that’s exactly what Mandi Meadows, lead singer of Hot Prowlers, did when the band wrote the piercing song “Heaven’s A Lie.”

“It’s an allusion to, specifically, Godwin’s song, ‘Images Of Heaven,’” Meadows said. “It’s about a tortured man whose lover doesn’t reciprocate. Or, may not even exist. In the same way, the lyrics to ‘Heaven’s A Lie’ also reflect kind of a tumultuous relationship with a lover. We also allude to Godwin’s song ‘Baby’s in the Mountains’ in the second verse with the lyrics, ‘I left the mountain / I ain’t your baby no more.’ They’re sensual and poignant songs, mixing two themes I really like working with musically and lyrically.”

While, sonically, there’s more than enough to set the Prowlers’ song apart from Godwin’s sound, the band certainly wears the influence on its sleeves. “Heaven’s A Lie” begins with a synth warble, four-on-the-floor, flanked by a stark, quirky guitar hook that is darkly catchy. Meadows’ vocals, a smash-up of Joan Jett bite and Debbie Harry gloss, is a perfect juxtaposition to the straightforward romp and stomp of the song.

“Even though it is our latest song, we’ve been working on it for a few years,” Meadows said. “The guitar riff in the chorus was inspired by Prince’s solo during the cover of ‘While My Guitar Gently Weeps’ at the Rock and Roll Hall of Fame ceremony in 2004. [Hot Prowlers guitar player] Andy [Collins] was just so struck by his style that he wanted to write a guitar part where he could do something similar, and it worked perfectly in this song. I mean, the song came out because I wanted to pay homage to Peter Godwin, and this is what came out of that desire. But, as a band, I think, ultimately, the biggest thing we always want from our songs is for people to be able to dance. We love writing music that gets people moving.”

“Heaven Is A Lie,” according to Meadows, was a bit of a fly-by-the-seat-of-your-pants endeavor. Invited at the last minute to contribute to the River City Rumble compilation released earlier this year, the band found themselves with little time to pull together a fully-finished product.

“We had just added Oliver [Carter] and Paul [Chenault] on drums and keys, respectively, but still wanted to be part of the project. We had essentially three weeks to record, mix and master the track and some of the pieces hadn’t been written yet, but we actually finished the song in a single marathon recording session. Some of Paul’s synth parts and the drum fills were even written while were recording the track. We also released a remix later that Paul did under his Tulipe Noire name. It’s a really great club version of the song. We’ve even worked to incorporate pieces of it into our live performance of the song.” •